The whole idea that Shakespeare didn’t write Shakespeare’s plays is a load of crap. I feel safe saying this, having spent a chunk of my college years studying Elizabethan theater. (Think of me what you will on that account.) The makers of Anonymous feel differently, but that doesn’t matter for our purposes. After all, the casual moviegoers who see this period political thriller won’t take its version of history any more seriously than they took Shakespeare in Love. What matters is whether the movie is entertaining. I must admit, it sort of is. 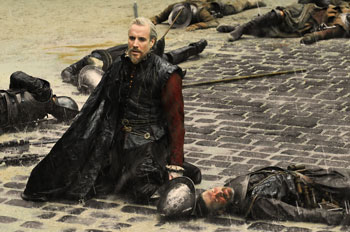 The story picks up in the late 16th century, when the earl of Oxford, Edward de Vere (Rhys Ifans), hires unknown writer Ben Jonson (Sebastian Armesto) to pose as the author of the many stage plays that Vere has secretly written and stockpiled over the years. Vere wants his plays performed in public but can’t put his own name to them without endangering his precarious position in the court of Queen Elizabeth I (Vanessa Redgrave). Unfortunately, before Ben even reads the first play he’s given — Henry V — he gets huffy about his integrity and blabs about the arrangement to his actor buddy Will Shakespeare (Rafe Spall), a drunken narcissistic idiot who’s nevertheless shrewd enough to snake the credit from Ben when Henry V becomes a hit. Ben can only seethe while Will soaks up Vere’s money and the adulation of packed houses.

But wait! The historical backdrop that this movie presents is even more cracked than that: Vere and the queen (played in flashbacks by Jamie Campbell Bower and Joely Richardson) were secret lovers when they were younger, and their unacknowledged bastard son, the earl of Southampton (Xavier Samuel), becomes involved in Essex’s rebellion, which the movie depicts as an elaborate frame-up engineered by Vere’s brother-in-law and the queen’s royal advisor, a reptilian hunchback named Robert Cecil (Edward Hogg). The machinations of Vere and the queen to protect their son wind up securing the conspiracy to conceal Vere’s authorship. Oh, and Shakespeare is implicated in the murder of fellow playwright Christopher Marlowe (Trystan Gravelle, turning the estimable writer into a vicious gay caricature). All that’s missing is an alien abduction.

Anyone who believes this version of history has been grotesquely failed by our education system. The pity is, Essex’s rebellion is a compelling tale in its own right, with or without Shakespeare. (Shakespeare’s theater troupe was indeed tangentially involved with the plot.) That story — about an old woman clinging to power and long-faded youth by playing “favorites” off each other until one of them leads a half-assed uprising against her — received a worthy telling in Benjamin Britten’s opera Gloriana. The story we get here is low-grade soap opera, with illegitimate kids hidden all over England and a cheesy revelation that Cecil hits Vere with near the end. The non-Shakespeare writing in John Orloff’s script is unfortunate, with the young Vere shouting “My poems are my soul!” and a climactic scene with Ben blubbering to Vere “You are the soul of the age!” Whoever wrote Shakespeare’s plays is resting comfortably in his grave.

Despite all this, director Roland Emmerich — who’s better known for helming disaster porn like Independence Day and 2012 — keeps things moving reasonably well until the last half-hour or so and maintains the story’s intelligibility despite the script’s unnecessarily convoluted, flashback-heavy structure. He does well to capture the way the petty jealousies and backbiting of the theater world are mirrored in the weightier rivalries at court. He even introduces a nice touch when rain starts falling on the stage of the Globe Theatre while Hamlet (Mark Rylance) delivers his soliloquy. Emmerich also elicits good performances from his actors, especially Hogg and David Thewlis as Cecil’s father (and his predecessor as the queen’s advisor), a canny political operative who runs his household with the same ruthlessness and savagery that he uses to deal with traitors and foreign plots. These elements add up to make Anonymous into Emmerich’s best film. If that sounds but poison in jest, nevertheless this thing at least betters expectations, take it for all in all.