“Everybody knew belt-tightening was coming,” said a longtime employee at John Peter Smith hospital who was let go recently. But few people expected the bloodletting at Tarrant County’s public hospital system to total 35 workers, including many who had worked there for a couple of decades.

The employees who were laid off or whose jobs were eliminated ranged from clerical workers to administrative professionals. Most got the bad news on Monday, Oct. 3 — hence the Bloody Monday reference. A few others were terminated the following day. 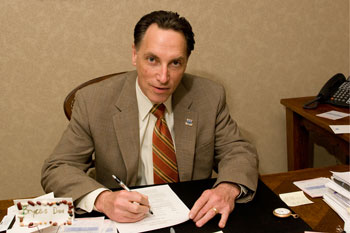 “It was out of the blue,” said another ex-JPS employee. “You are there working one minute, and then you’re being told your job no longer exists. That was it. It was cold and hurtful.”

Three of those who lost their jobs spoke to Fort Worth Weekly, all on condition that they not be named. Each of them signed an agreement not to talk publicly about his or her termination, as a condition of receiving severance benefits.

“They’re not great packages, but none of us can afford to put those in jeopardy,” said one.

Robert Early, CEO and president of JPS Health Network, said the terminations were no different than what happens at any business that finds itself in a financial squeeze. “We looked through the organization at all the jobs being done. We analyzed them to make sure that the value of those jobs was still there and that we didn’t have redundancy,” he said.

In this case, nearly two dozen of the people terminated were older than 40, and of those, 16 were over 50.

In the severance agreements, said one person who was terminated, there were several reminders, in bold type, stating that “This is not age discrimination.”

“But how else do you look at it when so many of us were there more than 20 years and making good money?” the ex-employee said. “And now we’re going to be replaced by youngsters who will make half what we made.” Many of those who were terminated were making more than $80,000 annually, with a few making substantially more than that.

“Where do we go get jobs at 60? These days, in this economy, anyone over 40 is pretty much unhirable,” the ex-employee said.

The terminations will affect pension benefits for some. Employees are fully vested in the pension system after five years at JPS, but the difference between being let go now versus working to age 65 could amount to hundreds of dollars less per month at retirement time.

“There is no question we felt terrible doing it,” said Early, who is generally credited with being a key player in turning the public hospital around from some severe problems after he took the helm in February 2009. “But we have nearly 4,600 employees and a responsibility to the fiscal needs of the community,” he said. “And in the end, we cut 35 positions, which is only eight-tenths of one percent [of all JPS jobs].”

Early said that though he would have preferred to avoid the job cuts, the reality is that the hospital network, like a lot of businesses, is facing tougher times. “We did the most we could to make ourselves a little more efficient with the minimum effect on personnel,” he said.

That doesn’t mollify those who lost their jobs, especially since many felt that the manner of their forced departure was particularly unfeeling.

“What Robert Early is missing is that we were never there for the money,” said one of those terminated. “We were there because we cared about the patients, and we were a family who worked together. And then the corporate structure walked through your door, told you you were through, and in many cases walked people, with security [guards], out through the front doors. They didn’t get a chance to say goodbye to their friends. It was a corporate bloodbath.”

Handling the staff cuts that way may have a ripple effect through the system. Several people who still work at JPS — all of whom asked that their names not be used — said that they didn’t like the cold way people were treated. “It’s like, next time it could be me,” said one. “We just don’t feel as solid as we did before this happened. We’re waiting for the next shoe to drop.”

In at least one case, a worker who was let go had been asked to break in a new employee who became the replacement.

“In that case they changed the job description by a word or two, but the new person is doing the same job, basically, as the person they let go. And for half the pay, probably,” said one of the ex-employees. All the terminated workers who spoke with the Weekly said they should at least have been given the chance to retire and leave gracefully, as opposed to being marched out the door.

Early agreed with the description of JPS as “a mission-driven, family organization” and said he takes responsibility for the decisions: “It wasn’t our intention to hurt people. That’s why we kept the list as small as possible. But I understand that for those 35 people it was hard.”

Though he didn’t acknowledge that the terminations were done harshly, Early did tell the Weekly, “In the future, we’ll always try to do the best we can to make that horrible situation as bearable and humane as possible.”

All the ex-employees interviewed for this story said they hold no grudge against the hospital. “I don’t want the hospital hurt,” said one. “They had to cut the budget, everyone knew that, and we knew they were not going to cut patient care. So it probably had to be done. It just shouldn’t have been done the way it was done.”

While declining to release any of the severance documents, at least for now, Early acknowledged that the description of the benefits given to the Weekly was accurate: Those who had worked in the hospital system 20 years or more were offered two weeks’ pay for every year worked. Those who’d been there for a shorter time were offered one week’s pay per year worked. And some continuing healthcare benefits were included.

“These are tough days,” he said. “I still feel terrible.”