You’d have to scratch your noggin pretty much to the bone to think of a bigger artistic iconoclast than Kinky Friedman, the self-proclaimed Jewish cowboy who couches mostly libertarian, often liberal arguments in the historically white-bread language of C&W. To launch his Hanukkah Tour on Tue, Nov 29, the Kinkster –– minus his Texas Jewboys –– will perform at The Aardvark (2905 W Berry St, 817-926-7814), a chip shot from the mostly conservative campus of TCU. 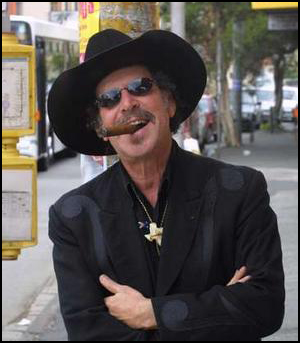 “Like any good Jewish troubadour,” reads the accompanying press release, “Kinky will be selling his latest books, hawking hilarious new tour posters, and touting the impending arrival of the kinkiest of new Kinky products: high-grade, top-shelf tequila.” The Kinky brand, encompassing novels, cigars, a Kinky Nano (containing more than 200 of his songs), and a Kinky jump drive (three complete audio books all read by Friedman), is seemingly boundless. His satirical bent has so far protected him from other country artists looking for a limousine liberal to skewer. So far. Friedman remains one of only a few C&W artists not aligned with conservativism –– as if every country artist was literally raised on a North America farm or in a backwood or swamp and limited in life experiences to the essence of C&W music: hard work, hard luck, drinking, driving (and drinking and driving), and shooting stuff, even the occasional fellow human being. In the face. (See: Billy Joe Shaver.) Even though most C&W artists haven’t gotten their hands dirty in decades and are of the ’burbs, suburban, the Toby Keiths and Kenny Chesneys of the world still refer to that specific kind of independence shaped by some sort of romanticized life on the farm or in the woods or swamps, basically trying to turn back the clock to 1953 or earlier. Excepting skinhead punk, C&W seems to be the only genre in which politics figure prominently. Maybe “politics” is too literal, too sweeping a word. How about “a particular, rural, Christian lifestyle”? And there’s no denying that C&W was, is, and will undoubtedly remain the province of white folk. In a certain light, you could see the genre as a bastion of majority groupthink, waning-majority groupthink. Maybe Lovett, Krauss, and company are reviving the Outlaw Country movement, a grassroots effort of yore that was mostly cosmetic and largely commercial –– Waylon Jennings, Willie Nelson, and their fellow outlaws were as disgusted by the grandiloquent music being churned out of Nashville as by label-empowering recording contracts. The outlaws quickly shamed into obsolescence most of the C&W artists who, clutching their beloved rhinestones, ignored the countercultured 1960s (Conway Twitty, Porter Wagoner, Marty Robbins). Would anyone with good taste bemoan a similar, loveless fate for Keith, Chesney, and their modern-counterculture-ignoring ilk? Now that the only feathers Nelson ruffles are on his farm, Friedman would be the only old new Outlaw. Though he’s never categorized as an official original Outlaw, Friedman released his debut album at the height of the movement, in 1973. Sold American’s beautiful, bittersweet title song documents –– with frightening lyrical precision –– the fall of the rhinestone cowboy. “You told me you were born so much higher than life,” Friedman sings in a swaying tempo and over softly strummed guitars and the steady, sweet clicks of rimshots, “But I’ve seen the faded pictures / Of your children / And your wife / Now they’re fumblin’ through your wallet / And they’re tryin’ to find your name / It’s almost like / They raise the price of fame.” You can criticize Friedman for his arch capitalistic tendencies or his ill-fated run for Texas governor, but there’s no denying the charm of the man’s music. Possibly even more shameful than Keith’s jingoism and perpetual self-aggrandizement is the fact that Friedman’s music is not given the respect and love it deserves, because it’s mostly non-serious –– and is often bitingly satirical and damn funny. The Hanukkah Tour will wrap up in mid-December in Houston.