This season seems to have brought us a lot of filmmakers reaching into cinema’s distant past for stories. My Week With Marilyn takes its cue from the 1950s, while Hugo goes back to the very beginnings of film, and the upcoming The Artist concerns itself with the advent of sound. I’m not sure what it all means yet, whether it’s a coincidence or a fad or artists foretelling the death of cinema (which has been hyped for at least the last half-century) or something else. What I do know is that it has yielded two films this week that are angling for awards season and good enough to deserve a nod or two.

Michelle Williams isn’t the first actress who leaps to mind to play Marilyn Monroe. Scarlett Johansson would seem to be a more logical choice, not only for the physical resemblance but also for her Marilyn-esque ability to lead with her sexiness without seeming too blatant about it. Still, while Johansson may be a better actor than Monroe, she doesn’t project the vulnerability that always showed through the highly stylized persona that Monroe created for herself. That’s why the chameleonic Williams is a better choice to portray such an icon. Watching her do it is the main reason to see My Week With Marilyn, a diverting but largely empty exercise in nostalgia. 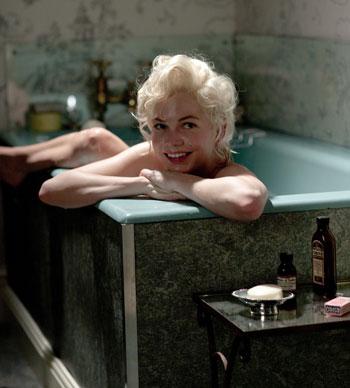 The film takes place in 1956, as Marilyn Monroe travels to London to co-star alongside her director Laurence Olivier (Kenneth Branagh) in a light comedy called The Prince and the Showgirl. Even though her new husband Arthur Miller (Dougray Scott) and her acting coach Paula Strasberg (Zoë Wanamaker) tag along to support her, she still drives the cast and crew insane with her perpetual tardiness and her skittish, intimidated behavior on the set. Witnessing it all is Colin Clark (Eddie Redmayne), a 24-year-old neophyte third assistant director who quickly becomes the only person in whom Marilyn can confide.

Didn’t we already know that Marilyn Monroe was a quivering nest of abandonment issues, professional insecurities, and chemical dependencies? Numerous biographies have painted a portrait of someone wildly unsuited for stardom, whatever her acting talents. The movie sheds no light on the warping nature of fame. First-time director Simon Curtis makes sure the momentum never falters, and he re-creates the “Heat Wave” number from Gentlemen Prefer Blondes to good effect. However, his starstruck tone too frequently plays like the work of someone in thrall to the Marilyn mystique who forgets to tell us what her stardom means for us, almost 50 years after her death.

There’s another big hole at the center of this movie. The script is based on two books by the real-life Clark, who went on to become a filmmaker in his own right, but the character of Colin largely spends the proceedings reacting to these temperamental movie people. The only memorable thing he does is give Marilyn a snappy summation of her collaboration with Olivier: “He’s a great actor who wants to be a film star. You’re a film star who wants to be a great actress. This film won’t help either of you.” Even with the explanation that she habitually opens up to her assistants and then forgets them, we still don’t know why Marilyn takes such a shine to Colin. This is a hard part to make interesting, and Redmayne isn’t up to the task.

This movie should be seen for the acting, if nothing else. A bristling Branagh plays Olivier as alternately generous and condescending, a vain and pretentious petty tyrant who’s also incredibly talented and canny enough to evolve artistically. Even the tiniest roles are cast well: Scott nails Miller, a Jewish intellectual who’s already exhausted after three months of being Marilyn’s husband; Emma Watson provides spunk and a welcome lack of self-pity in the role of a wardrobe assistant whom Colin blows off in favor of Marilyn; Judi Dench cuts a fine line as Dame Sybil Thorndike, a character actress in The Prince and the Showgirl who takes an indulgent, nurturing attitude toward Marilyn and yet is the only cast member tough enough to stand up to Olivier.

Mimicry is an underappreciated skill among those of us who evaluate actors, so Williams’ imitations of Monroe’s breathy voice, her languid yet confident movements, and her air of dazed innocence are gratifying to see. Yet she does more than that, capturing Marilyn’s crippling shyness and self-destructive tendencies without any of the histrionics that the part of a melting-down star would seem to lend itself to. See Williams’ turn here next to her role as a steely, determined pioneer woman in Meek’s Cutoff (her other great performance of 2011), and you’ll be hard-pressed to recognize the same actress in both films. My Week With Marilyn figures to give Williams more exposure as a leading lady than any of her previous projects, and its chief value is as a next step in the continually fascinating career of one of America’s greatest actresses.

It’s disconcertingly easy to take filmmaking for granted. Even if you go to movies only once a month (as opposed to the four or five per week that I average), the power of cinema to make superheroes fly, wizards cast spells, and dinosaurs roam the earth can easily become part of the landscape. Nevertheless, someone had to think that up, and that was Georges Méliès, the stage magician whose short films in the late 19th century were among the first to exploit the medium’s potential to bring the impossible to life. Martin Scorsese’s Hugo tells that story, among other things, and at its frequent best this children’s fable makes the filmmaking process seem like the primitive, elemental magic that it is.

Based on Brian Selznick’s remarkable illustrated novel The Invention of Hugo Cabret, the story takes place in the 1930s in a Paris train station, where 13-year-old Hugo Cabret (Asa Butterfield) secretly lives and works winding the station’s clocks after the death of his father (Jude Law) and the subsequent disappearance of his drunken uncle (Ray Winstone). When Hugo befriends a shopkeeper’s daughter named Isabelle (Chloë Grace Moretz), their adventures lead them to make surprising discoveries, first about the automaton that Hugo’s father rescued from a museum’s trash heap, and then about Isabelle’s adoptive father Georges (Ben Kingsley), who turns out to be none other than Méliès himself, now an obscure and embittered shell of a man who owns the toy shop in the station. 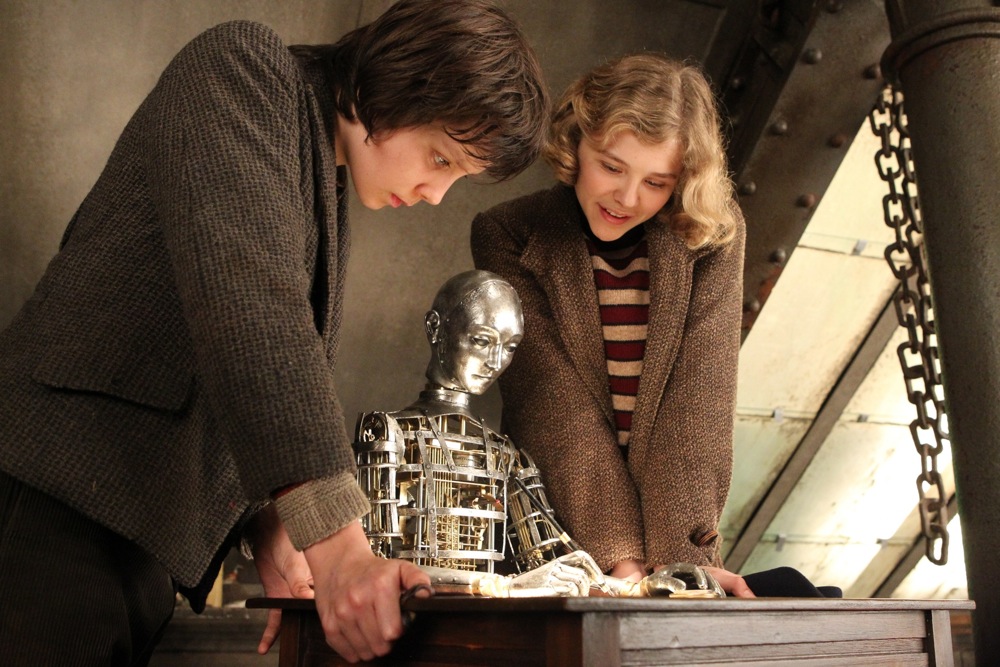 If the movie feels different from the usual kiddie adventures that fill our multiplexes, that’s because Scorsese doesn’t draw on Hollywood for his inspiration but — fittingly — from specific traditions of French cinema. In his telling, we can recognize the urban lyricism of René Clair and Marcel Carné, the sophisticated slacker spirit (the flânerie, if you will) of Sacha Guitry and Jacques Tati, and the mechanically obsessed whimsy of Jean-Pierre Jeunet and Sylvain Chomet. There’s even a bit of Chaplin (an enormous influence on French filmmakers) in Sacha Baron Cohen’s virtuoso slapstick performance as a station inspector. Yet Scorsese differentiates his work from those artists’ in his use of a technology available to none of them.

I made the mistake of initially seeing this film in conventional 2D format, in which it’s far less interesting visually than it is in 3D. Other filmmakers have used 3D only when they’re staging action sequences or comedic gags, but Scorsese employs it even in throw-away sequences when not much is happening. Much of the décor consists of clutter on desks and shelves, where the 3D gives the visuals layering, depth of field, and a complexity that’s pleasing to the eye. Somehow it makes sense that an old master like Scorsese would show us how to utilize this new tool with unprecedented subtlety and guile.

Of course, the 3D plays its part in the splendiferous segments late in the film showing Méliès creating his fantastical universe of watery mermaids and exploding skeletons for the cameras. The story runs into a few dead spots and wrong notes in the early going, but it picks up great momentum in the second half once Hugo and Isabelle discover how some of the first films were made. You can easily understand how the novel appealed to a cinephile like Scorsese, and his enthusiasm for the project is palpable. Hugo may not be the masterwork that others have claimed it to be, but this family film is enough to give even the most jaded moviegoer a new appreciation for the power of cinema.

My Week With Marilyn