Texas Music artists who celebrate redneckness via cliché-ridden novelty songs typically represent the worst of the genre. Fake cowboys glorifying the mundane make me want to listen to something else –– Paraguayan polka, industrial techno, Hungarian spoken word, a child whining, anything. So I’m confused by the fact that I enjoyed Casey Donahew’s Double Wide Dream. 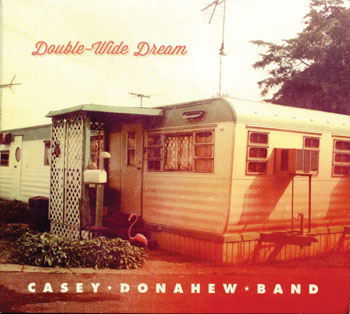 The title song currently climbing toward the top of the Texas Music Chart is about living in a trailer with a hell-raising chick who likes to “cuss and fight” and “drink all night” and who can “roll one up ’til I’m feeling right.” Nothing new here. And yet it works. Donahew doesn’t try to out-twang or out-gravel anybody. He just sings in his natural voice, which is plenty good. He wrote or co-wrote all 10 songs, and you get the feeling he lived every one. Songs roll out like diary entries rather than the typical outlaw braggadocio.

Donahew is a Burleson fellow, but my accolades here aren’t spurred by local bias. This poison pen cuts locals no slack. Double Wide stands out because of solid, honest performances. The musicianship is a country-rock hybrid that flaunts the down-home while sprinkling in edgy electricity. Donahew shines on sincere songs, such as “Give You a Ring” and “I’d Give Anything.” Better yet, he mines new energy into tired topics and doesn’t sound the least bit foolish on redneck anthems. “White Trash Story II (The Deuce)” references a swag-stealing Grandma, pink flamingos, and dynamite fishing –– and includes this classic bridge: “My little sister’s getting married today / And my dad’s still in jail, so I’ll give her away / I’m gonna get hammered drunk / And light some shit on fire.”

OK, so Hoagy Carmichael isn’t threatened. Still, I’ll proudly slap this CD in my jambox on occasion while I’m getting hammered and lighting shit on fire. –– J.P.

Kings of the Weekend, Bad Sports

With an album titled Kings of the Weekend and a moniker like Bad Sports (formerly signed to “Douchemaster Records,” no less), you’d be forgiven for expecting either novelty or irony here. But this Denton trio deals in a brand of punk that’s tight and thrashing, often catchy, and never especially abrasive. Kings of the Weekend, Bad Sports’ sophomore effort, is less of a piece with pop-punk in the strictest sense than with The Ramones, an influence heard across the disc’s entire 30-minute playing time and most apparently on “Can’t Stay” and “Can’t Just Be Friends.” Guitarist/co-vocalist Orville Neely and bassist/co-vocalist Daniel Fried deliver their vocals with a cool detachment and a sense of melody. The pair also splits songwriting credit (jointly and separately), and the subject matter in “Teenage Girls” and “Get Your Head” recalls the social observations in the work of The Arcade Fire and LCD Soundsystem. If those comparisons seem lofty, bear in mind that, as a punk outfit, Bad Sports offer lyrics less cluttered and more direct, where those other groups’ approaches are decidedly artier and more critical. Speedy in tempo and duration (more than half of the tracks here are under the two-minute mark), the music is likewise stripped-down and simple, but the tunes never lack for hooks. If Kings of the Weekend isn’t a profound artistic statement, it also isn’t innocuous party music. Instead, Bad Sports have turned in a worthy –– and fun –– second album. –– Z.S.

Recorded last fall in Fort Worth with producer and Fort Worth legend Jim Colegrove, Thistles & Salt is singer-songwriter Larry Stone’s second album since returning to music in 2008. Though Stone has a country singer’s voice, the album has a more inclusive, Americana sound, with the jangle of acoustic folk instruments, the bluesy bends of electric guitars, and the old-timey warble of a pedal steel. On tracks like “Old Doug and the Salt Bag Blues,” the cadence of his vocals switches between the nostalgic storytelling of Bob Dylan’s Blood on the Tracks and some of Paul McCartney’s Beatles melodies. Which is to say the album is a little all over the place and rather ambitious: Not quite a concept album, Thistles & Salt evokes history. Everything from Stone’s lyrics –– he wrote or co-wrote everything here but the three aptly chosen covers –– to the meticulous sound bursting from each song is akin to the recent work of Ry Cooder (a dabbler in and miner of many traditions himself). The problem? Assured as Stone is, the album is kinda hokey. The religion-and-politics romp “John the Baptist” is full of ham-fisted metaphors (overt references to Wall Street don’t help), and the production choices give the song’s blues-rock style a cringe-inducing ’80s vibe. There are some treasures here, like the quick instrumental ramble “Sally McGee” and the countrified “Cowgone Boogie,” which calls to mind a ranch dance. But Thistles & Salt is ultimately a mixed bag –– not for want of trying, though, to be sure. –– Z.S.