Everyone connected with Young Adult seems to have something to prove. Director Jason Reitman, typecast as a purveyor of crowd-pleasing entertainment that’s mature and intelligent enough to win awards, wants to show that he can make something thornier and more problematic. Screenwriter (and Reitman’s Juno collaborator) Diablo Cody, unfairly pigeonholed as an author of teenspeak, wants to show that she can credibly write a story focusing on older characters. Lead actress Charlize Theron, still largely stuck in glamour-puss roles even after her Oscar win for Monster, wants to show that she can play a deluded hard case in all her unlikable glory.


All that motivation is perhaps why Reitman, Cody, and Theron seem to be on the same wavelength and why they spur one another to varying degrees of triumph. More likely to induce cringing than outright laughter, this comedy won’t be to everyone’s taste, but if you’ve overdosed on holiday cheer at the multiplexes, the sour goodness on offer here is just the tonic you need. 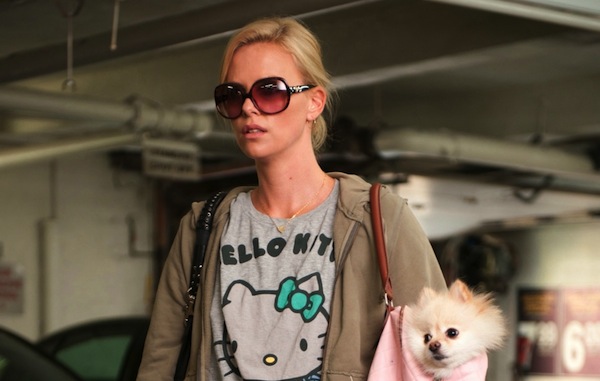 Theron portrays a walking catastrophe named Mavis Gary, a 37-year-old Minneapolis author who has taken over the writing of a once-popular, winding-down series of YA novels. When her high-school boyfriend Buddy (Patrick Wilson) includes her in a mass e-mail announcement of his baby’s birth, she takes it as an inducement to return to the tiny Minnesota hometown that she loathes, break up his marriage, and steal him away from his wife (Elizabeth Reaser). Mavis’ former schoolmates call her things like “psycho prom-queen bitch” behind her back, and the only one who’ll engage her is Matt (a perfectly cast Patton Oswalt), a self-described “fat geek” who keeps tabs on her quest largely so he can make fun of her.

The opening sequence, devoid of background music or dialogue, chronicles the rhythms of Mavis’ hapless life and sets the tone for the rest of the film, which relentlessly details its main character’s lack of character: her undisguised contempt for her poorer and less fashionable peers; her inability to comprehend why anyone would want to have kids or live in a small town; her pathetic insistence that Buddy, against all evidence to the contrary, must be miserable in his marriage. Of course, it’s Mavis who’s miserable, drinking heavily, confining her social life to one-night stands, and pulling out her hair as a nervous habit. Even though she thinks of the people she grew up with as white trash, Mavis is the one who swigs Diet Coke for breakfast, binges on KFC, and spends hours watching My Super Sweet 16 when reading a book might break her out of her rut. When Buddy first sees her, he says, “It’s like we all got older, and you stayed the same!” He’s marveling at her beauty, but our knowledge of Mavis’ stunted emotional life gives the compliment its double edge.

Cody takes full measure of the unself-aware Mavis, who expresses her grievances through the increasingly self-pitying ruminations of her novels’ wealthy prep-school heroine. Reitman directs in typically unobtrusive and smooth fashion, with a great sense of comic timing, and he confines the songs on the soundtrack to the early 1990s alt-rock (The Lemonheads, Veruca Salt, Dinosaur Jr., Teenage Fanclub) that Mavis has never grown out of. Theron embraces the role’s ferocious unpleasantness: Watch her inwardly recoil from a blind date as he describes his charity work in Cambodia,or laugh mirthlessly when Matt asks if “young adult” means vampire novels. Their work culminates in a sad, riveting scene when Mavis spectacularly loses her grip at a gathering at Buddy’s house, lashing out at the town and wailing that she could have married Buddy and had his kids. Naturally, she doesn’t take into account that doing so would probably have made her even unhappier than she is.

The film’s critique of Mavis does have some holes, especially regarding an overly ambiguous scene at the end when Matt’s damaged, shut-in sister (Collette Wolfe) gives a pep talk that affirms all of Mavis’ bad choices and prejudices. Still, while we hear so much about the legitimate need for strong female characters, this movie demonstrates that weak characters can be just as compelling and provocative. Building a movie around an antiheroine as messy and unlikable as Mavis is always difficult to pull off, and Hollywood tends to be particularly bad at it. When a film does it with as much skill as Young Adult does, it demands our attention.