I proudly count myself as a Sherlockian, but I try not to be pigheaded about it. I don’t insist that the current Sherlock Holmes movies be rigidly faithful to the Arthur Conan Doyle stories that spawned the characters, nor do I object to the films turning Holmes and Watson into comedically bantering crime-solving buddies.


What I do ask is that the great detective display his otherworldly detective skills for our benefit. After all, the fact that he’s smarter than everybody else is what separates Holmes from the other action heroes. Sherlock Holmes: A Game of Shadows too frequently forgets that, which is partially why this sequel loses so much of the original 2009 film’s charm. 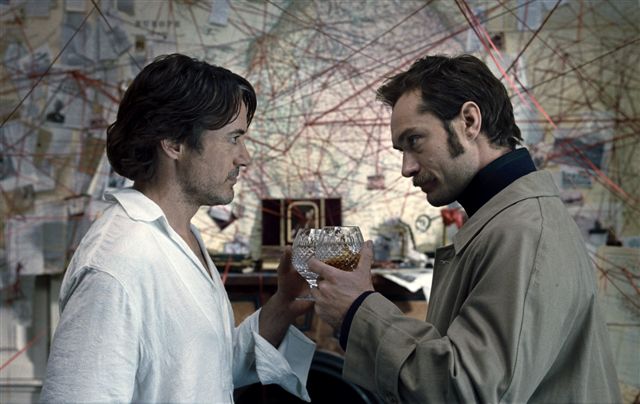 The story picks up in 1891 with a series of assassinations and terrorist bombings across Europe that have been blamed on anarchists and Romani Gypsies. From the privacy of his study, Holmes (Robert Downey Jr.) fingers a different culprit: James Moriarty (Jared Harris), a math professor and one of the few people Holmes recognizes as an intellectual equal. Moriarty is looking to profiteer by secretly buying up a bunch of war-related industries, and Holmes and Watson (Jude Law) end up running all over France, Germany, and Switzerland to keep the professor from starting a world war.

Moriarty demonstrates his malevolence early on when he terminates his employee Irene Adler (Rachel McAdams) in the middle of a busy restaurant. Her end is unfortunate not only for her but for the movie as well. The murder is meant to be shocking in its casualness. However, director Guy Ritchie treats it so casually that the film makes no reference to it for a good 10 minutes afterwards, and it comes across like he doesn’t appreciate the contributions of the character or the actress. Surely the heroine of the original film deserves a better death than the one she gets. The move is sadly typical of this sequel’s tone-deafness.

The comic chemistry between Downey and Law remains gratifyingly undiminished here, and Ritchie serves up two engaging twists on the device from the first film in which Holmes thinks through his fight sequences before they happen. On the other hand, the additions to the cast — Stephen Fry as Holmes’ brother Mycroft and Noomi Rapace (from the Swedish version of The Girl With the Dragon Tattoo) as a Gypsy who’s targeted by Moriarty — deliver much less than they promise. Worse, Holmes’ powers of deductive reasoning are here reduced to sleight of hand and wearing a series of silly disguises. We never even learn how Holmes extricates himself from his final confrontation with Moriarty above a Swiss waterfall. Rather than show the detective’s superhuman brainpower at work, the filmmakers are more interested in showing him dodging bullets and explosions in slow motion. One wonders why they bothered with Sherlock Holmes at all.

Sherlock Holmes: A Game of Shadows