There are two ways to evaluate Cameron Crowe’s family-friendly new film We Bought a Zoo. One is by the standards of other PG-rated Hollywood movies that revolve around cute animals. By that measure, this is a drama that deals with thorny family issues in a grown-up manner that puts it well beyond the forgettable likes of Dolphin Tale, let alone Zookeeper. The other way is by the much higher standards of Cameron Crowe movies. By that measure, this shows a filmmaker still flailing about for direction. 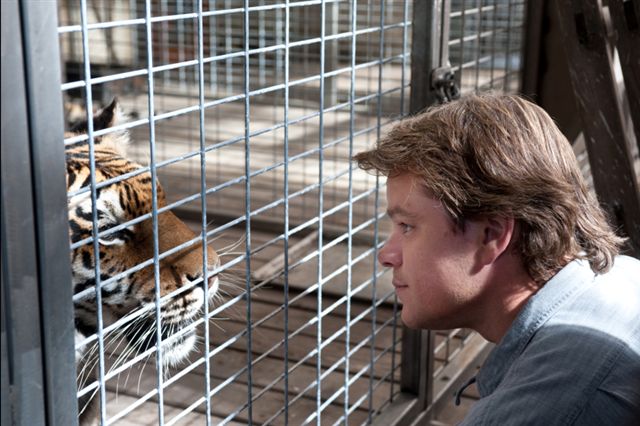 Adapted from a memoir by British journalist Benjamin Mee, this film plays fast and loose with its source material. In the big-screen version, Mee (Matt Damon) is a California writer struggling to raise two kids alone after his wife’s death. Seeking to move, Benjamin and his young daughter (Maggie Elizabeth Jones) find a stately old house on a large grounds. Only after falling in love with the place do they find out the house comes relatively cheap because it’s attached to a run-down zoo that the new owner is legally obligated to take care of. Undeterred, Benjamin forges bravely ahead with renovating despite a teenage son named Dylan (Colin Ford) who’d rather be anyplace else, a restive skeleton staff, and the advice of his supportive brother Duncan (Thomas Haden Church). When Benjamin says he’s trying to give his kids an experience, Duncan responds, “Stop before zebras get involved!”

The romantic optimism of Crowe’s earlier films is much in evidence here, but all the air has gone out of it. That’s perhaps because Crowe and co-writer Aline Brosh McKenna never properly establish that Benjamin is throwing himself into the project so he can escape the pain of his wife’s memory. By contrast, The Descendants handles similar issues of bereavement with much greater understanding. Without that grounding, Benjamin’s exhortations for us to indulge “20 seconds of insane courage” come across as motivational-poster platitudes.

The movie has two excellent scenes late, one when head zookeeper Kelly (Scarlett Johansson) tries to convince a stubborn Benjamin that their aged male lion needs to be put down and another when Benjamin and Dylan finally air their suppressed issues. John Michael Higgins also injects some astringency as a persnickety zoo inspector. Yet these aren’t enough to compensate for Crowe’s missing touch with supporting characters, which gave his best films a bustling quality. Dylan’s flirtation with a girl who works unofficially at the zoo (Elle Fanning) falls flat, and when Kelly kisses Benjamin late in the film, it comes out of nowhere — the vibe between them up until then is one of co-workers who mutually respect each other. This lapse is astonishing from a filmmaker whose flair for romance was once his greatest strength.

By his own admission, Crowe lost his way after his autobiographical drama Elizabethtown flopped with critics and the box-office in 2005. We Bought a Zoo catches fire on a few occasions, but overall it shows that he has a long way to get back to his best. We should root for him; it would be a terrible loss for cinema if Cameron Crowe’s best days turned out to be behind him.