Ever since Stieg Larsson’s flawed but highly addictive Swedish-language Millennium trilogy exploded into the English-speaking world, movie fans have been waiting for a Hollywood big-screen adaptation of those crime thrillers. Somehow, the release of the Swedish film versions last year only piqued interest rather than dampened it. 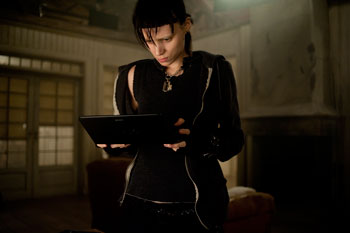 The wait is over now, and David Fincher’s realization of The Girl With the Dragon Tattoo is no disappointment. Indeed, it’s a significant improvement on the Swedish version, with greater sensitivity to tone and more of the book’s plot and character packed into a roughly equal running time. It’s the version that the novel deserves, and while it isn’t any more than that, it’s certainly good enough to please Larsson’s legions of fans.

This time, Daniel Craig plays the recently ruined and disgraced Swedish journalist Mikael Blomkvist, and Christopher Plummer portrays the aged business tycoon Henrik Vanger, who brings him out to remote northern Sweden to investigate the 1966 disappearance and presumed murder of Vanger’s favorite niece Harriet (played in flashbacks by Moa Garpendal). The Vanger family is a viper’s nest of money-grubbers and Nazi sympathizers, so it’s not surprising that they turn out to be harboring a serial killer. Against all his initial expectations, Blomkvist unearths enough new information to become a target.

We can’t discuss The Girl With the Dragon Tattoo without discussing the girl with the dragon tattoo. She is Lisbeth Salander (Rooney Mara), a freelance investigator who’s engaged by Blomkvist as a research assistant and winds up doing more than anyone to crack the case and bring the villains to their comeuppance. The novels were best-sellers mainly because of this idiosyncratic character, a bisexual, leather-clad, heavily pierced, near-sociopathic computer hacker savant from a Gothically bad childhood who becomes the series’ vengeful dark angel. Mara, whom you’ve probably only seen dumping Jesse Eisenberg at the beginning of Fincher’s The Social Network, makes the character into a wraithlike presence who metes out her own justice while maintaining a disturbingly disengaged tone even toward the legal guardian (Yorick van Wageningen) who previously raped her. Frightening though Mara is, she doesn’t have the feral edge that Noomi Rapace brought to the role in the Swedish film. Tellingly, the scariest details about this Salander come not from the actress but from the filmmaker: the spooky sight of her glimpsed through a camera’s night vision or the black makeup around her eyes when she exacts payback from her guardian.

Those touches are typical of the meticulously professional treatment given this material by Fincher and his fellow-traveling creative team, including cinematographer Jeff Cronenweth and composers Trent Reznor and Atticus Ross. Production designer Donald Graham Burt does particularly well at capturing all the textures in this story: the snowy desolation of the grounds of Vanger’s estate contrasted with the antique warmth of the interior, the windblown grit of Stockholm’s streets, the squalor of the computer hackers’ apartments, the sleek modernism of the offices where Salander works.

Larsson’s fans will be surprised by the film’s one significant departure from the book, which regards the way in which Harriet is eventually found. This gambit doesn’t work because of the casting of one actor who looks entirely the wrong age, but it’s a minor misstep that stands out only because of the correctness of everything else here. Steven Zaillian’s script includes the Vangers’ anti-Semitic history and the goings-on at Blomkvist’s struggling news magazine without derailing the momentum built up by Fincher. For his part, the director covers all this territory — which necessitates some tricky flashback sequences — in a swiftly moving 158 minutes. His direction is mostly self-effacing except for a bravura sequence in a deathly quiet mansion, where Blomkvist thinks he’s playing cat-and-mouse with the killer, only to find that the reverse is true.

The filmmakers tone down Larsson’s rhetorical excesses, though they never reach beyond the material. That’s odd, given how Fincher has been able to use genre entertainment to access larger themes in Zodiac and The Curious Case of Benjamin Button. Perhaps he’s saving that up for later in the trilogy. In any event, Dragon Tattoo is a satisfying piece of pulpy detective fiction, with an underdog heroine who can take down the monsters of the world with a golf club or a pilfered account password, and you’ll likely come out of this movie primed for her further adventures.