The problem with Santa Claus is that he’s so ubiquitous during the holidays, he’s become a bit of a bore. People think of him as a big fat symbol of generosity (commercialism?) rather than a character with a backstory –– he’s all girth and no dramatic heft, so to speak. Casa Mañana’s director of youth theater, Joe Sturgeon hopes to remedy this situation with his world premiere show, Santa Claus: The Musical.


Although the title is a bit generic, the source material isn’t: Sturgeon adapted an obscure 1902 book entitled The Life and Adventures of Santa Claus, written by the author of The Wonderful Wizard of Oz, L. Frank Baum. Sturgeon not only wrote the script, but he also penned most of the original lyrics for the show’s songs and directed the current production. 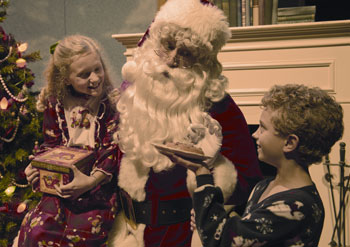 He discovered the book a couple of years ago while researching Casa’s staging of Oz. In addition to the Santa Claus book, “Baum wove stories about Claus into some of the later Oz books,” Sturgeon said. “When you look at his maps of Oz, the forest where young Claus was raised is there, and the Tin Woodsman actually goes to meet Santa Claus at one point, which I thought was interesting.”

Santa Claus: The Musical follows the basic outline of Baum’s book with select edits and embellishments to heighten the story’s dramatic arc. The baby Claus is abandoned in the woods, discovered by a woodsman named Auk (Greg Dulcie), and left in the care of a kindly sisterhood of nymphs. The grown-up Claus (Christopher Deaton) ventures out of his sylvan idyll into the real world, where children suffer from both grueling poverty and buzzkilling grown-ups known as the AWGWAs (Awful Wicked Gruesome Wretched Adults), who wish to destroy all the toys in the land. The main villains are the Baron Braun (Paul Grant), a corrupt sheriff who secretly loves a stuffed pig named Mr. Snouty, and the evil Frost Queen (Cara Statham Serber), who works overtime to keep the village kids unhappy. The show’s score contains a mix of familiar hymns and carols with new lyrics by Sturgeon and Jim Wren and completely new tunes with music by Wren and Joe O’Keefe.

Although it’s written as family entertainment, Santa Claus: The Musical doesn’t sugarcoat some of the hard lessons of Baum’s book –– the world contains both haves and have-nots, luck and fate are powerful forces, and tyrants will exert their will over populations whenever possible. But Santa figures out that kindness and generosity, extended especially to people you don’t know, goes a long way toward righting some of the wrongs of life. Sturgeon worked hard to preserve this lesson even while excising some of the darker parts of Baum’s book.

“Baum’s always been one of the more whimsical children’s writers, but [the Santa book] contains one of the more violent scenes in any of his works,” he said. “The friends of Santa go to war with his enemies, and one of the AWGWAS is cut in half during the battle. I thought, ‘Righteous war in a children’s show? Hmmm.’ In taking out that scene, I had to create a stronger villain. I turned the Frost King –– who was sort of a minor irritation in the book –– into the Frost Queen.”

Sturgeon also had to locate a young actor to play Claus, one who had considerably more charm and complexity than your typical shopping mall St. Nick. As conceived by both Baum and Sturgeon, the character is a perpetual outsider, an orphan raised by supernatural creatures who must grapple with the very tough realities outside of his sheltered and rarefied upbringing. The choice of Deaton at first seemed an unlikely one –– the actor had made his mark at Casa playing over-the-top villains like Captain Hook in Peter Pan and Stromboli in Pinocchio. But Sturgeon had seen him work with the child actors in his shows, who were inevitably charmed by him, so the director gambled that an audience of kids would be too. Reviews so far indicate that Deaton makes a dashing Claus in his youthful, pre-beard and -belly days.

Santa Claus: The Musical, of course, wants to impart some lessons along with all the comedy, flamboyant villainy, and music. Baum’s book edges close to outright advocacy of the rights and dignity of poor people, but Sturgeon had no interest in hammering his family audiences with a lefty lecture about the toll of capitalism. Still, he hopes the show does inspire qualities like compassion and empathy.

“What’s really interesting in the book is that Santa has a personal crisis about whether he should give toys to rich kids as well as poor kids,” he said. “Auk finally tells him, ‘Children are children, they’re all in need of play.’ I steered away from those kinds of questions. I wanted the message to be that every human being should help make the world a better place than he or she found it.”