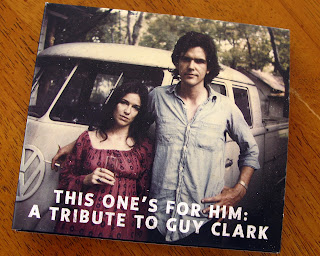 Lyrical brilliance abounds on This One’s For Him: A Tribute To Guy Clark, a collection of 30 Clark originals interpreted by an impressive stable of singers, many of them with deep Texas roots.

Clark doesn’t sing on the album. His distinctive voice and comfortable delivery are so form-fitted to his songs — and I’ve listened to them for so long – that I figured it would be tough for anybody to top the originals. But this double-CD features A-Teamers, old timers, young guns, and famous sons, and most of them deliver solid renditions. A few even outdo the master.

Ramblin’ Jack Elliott proves yet again that he can out-sing/talk most anybody on a languid ballad, and you’ll hang on every word of “The Guitar.” James McMurtry’s distinctive voice seasons each line of “Cold Dog Soup,” and Hayes Carll’s stoner persona envelops “Worry B. Gone” like a big cloud of kush.

The sweet Emmylou Harris and raspy John Prine meld with yin-yang completeness on “Magnolia Wind,” while “Dublin Blues” sounds as if it were tailor-made for Joe Ely. Radney Foster faced the unenviable chore of singing “L.A. Freeway.” That song’s been sung by the greats, and Jerry Jeff Walker pretty much owns it. But while Walker’s old version sounded as if he were telling Los Angeles to kiss his ass, Foster’s warm voice offers a melancholy feel of resignation that works well.

“Instant Coffee Blues” is a favorite of mine, and Clark’s version is so perfect that I was prepared to be disappointed by the remake. But Suzy Bogguss offers her own slant and makes the song gently soar. It turned out to be my favorite listening moment.

Of course, everything can’t be hunky dory on a 30-song compilation with each song performed by a different artist. Producers Tamara Saviano and Shawn Camp did an admirable job of lining up first-rate pickers and capturing studio magic, but potential pitfalls abound on a task as immense as this.

Willie Nelson is in fine vocal form on “Desperadoes Waiting For A Train,” but he’s already recorded the song with Waylon Jennings, Johnny Cash, and Kris Kristofferson. No way could he top that version. He’d been better off singing something different.

But I’m nitpicking. There’s only one genuine gag-me moment – Terri Hendrix’s overwrought take on “The Dark,” an interpretation so horrific that I’ll just stop now before I say something really mean.

Otherwise the album is a gem. It certainly couldn’t have ended in better fashion – Jerry Jeff Walker singing a new Clark song, “My Favorite Picture Of You.” Clark wrote it specifically for Walker and this project. Walker and Clark were such a fresh fit and pioneering force in the early days of Texas Music that it feels right to hear them team up again and hit a home run.

“A thousand words in the blink of an eye – the camera loves you and so do I,” Walker sings, and it sums up the way I feel about Clark’s music and this project in general.

[UPDATE on Jan. 9, 2012: I received an interesting email from producer Tamara Saviano that mentioned “The Dark,” the song that incited me and made me wield my poison pen. Here’s an entirely different perspective of Terri Hendrix’s version of ‘The Dark’ as described in Saviano’s email:

“Thanks for the nice review.  I really appreciate it and I think you understood what we were trying to do.  One thing I wanted to point out to you just to show how everyone has a different opinion…Guy Clark’s favorite track on the entire 30-track set is Terri Hendrix’s reading of ‘The Dark.’  He said he can never do the song again because Terri now owns it.  It’s just interesting to me that you hate it and the songwriter loves it.  Of course, I have my own favorites and so does everyone else involved.”]