When Garret Storms auditioned last year for Stage West’s current production of David Ives’ New Jerusalem, his hopes weren’t particularly high. He’d just returned to Fort Worth to live with his family after earning a BFA in musical theater at Sam Houston State University. His resumé of local productions wasn’t long, and his main goal was to introduce himself to North Texas theater companies so they’d keep him in mind whenever good roles came up. So when Stage West’s Peggy Kruger-O’Brien called him back to say they wanted him for the central role in Ives’ play –– the part of the hugely influential 17th-century Jewish philosopher Baruch Spinoza –– he didn’t believe it at first. 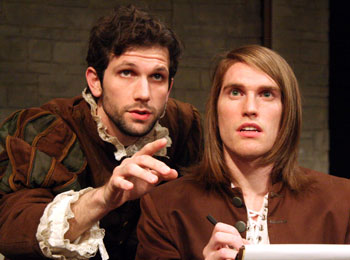 “I was shocked,” he said. “I asked Peggy to repeat herself. It was very much unexpected.”

Although the Spinoza character in New Jerusalem is, like Storms, 23 years old, this is not a role that any young actor would undertake lightly. Spinoza’s views of God, fate, and the universe were not only radical in the 1656 Amsterdam community of exiled Portuguese Jews but also timeless –– they continue to piss off a lot of people today. His deterministic view of the natural world rejected the idea of God as a grumpy old man in the sky, emphasizing instead the notion of a divine but impersonal essence that permeates all things and renders the idea of free will meaningless. This was scandalous not only to Spinoza’s fellow Jews, who’d fled from the Spanish Inquisition to asylum in Amsterdam, but also to the Dutch Christian leaders who officially but not happily tolerated these Jewish refugees.

A lot of people think Spinoza helped set the stage for the Enlightenment and scientific modernism. When someone asked Albert Einstein if he believed in God, the physicist famously replied, “I believe in Spinoza’s God.” The 17th-century innovator paid heavily for his forward thinking, however: He was excommunicated from his beloved community after a trial conducted by his Jewish peers and watched by nervous Dutch overlords. New Jerusalem is the courtroom-style drama of faith and ideas that playwright Ives has created from that event.

“Spinoza got in trouble because he said that God wasn’t untouchable,” explained Storms. “He said you could see God by looking at a tree or the architecture of a chair. There wasn’t a ‘higher power,’ according to his beliefs –– the higher power was the person sitting right next to you. That was scary to a lot of people. The first thing the rabbis accuse him of is atheism.”

Although Storms dipped his toe into classical and Renaissance theater at Sam Houston, he spent most of his time onstage in musicals. That might not seem like a good primer for the text-heavy philosophical jousting in New Jerusalem, but Storms has never drawn a strict line between musicals and straight plays. In his mind, they merely employ different stylistic devices for the same end: to clarify ideas and illustrate the development of characters in a show. In New Jerusalem, the actors treat the audience like members of Spinoza’s synagogue, pleading ideas directly to them in much the same way a performer in a musical might belt a song past the footlights.

“It was a relief for me when we went from rehearsals to the first preview night,” Storms said. “I didn’t have to talk to a wall or the stage manager. Suddenly I had all these faces to look at, and it kept the words fresh. My objective is to help the audience understand Spinoza’s point of view.”

When asked what Storms himself thinks of Spinoza’s philosophies, he admits that some of the ideas resonate with him and that “some of them are terrifying.” Storms mentions specifically Spinoza’s idea that when the body dies, the soul dies, and there is nothing to be gained from immortality. But he says the play is challenging and thought-provoking in the best sense and that Ives the playwright doesn’t take sides in the debate. Above all, Storms insists, New Jerusalem is designed to be an entertaining night at the theater.

“It doesn’t come across as a lecture or someone reading a term paper,” he said. “It’s a complete theatrical experience with humor and suspense and character development. But it’s also not the kind of show you get to see every day. We want audiences to leave thinking about what they believe.”