More than 50 years after his death, Carl Jung seems to have reasserted himself in the zeitgeist, with the recent publication of his famously bizarre The Red Book in German, a display of its illustrated pages in New York, and now David Cronenberg’s film A Dangerous Method, which takes up the Swiss psychologist’s relationship with both a patient and a mentor. It’s a dry and talky film where not all that much happens, and some moviegoers have found it deadly boring. I found it an engaging play of ideas with some terrific performances, despite its flaws. 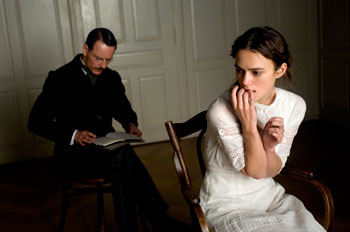 The story picks up in 1904 as Sabina Spielrein (Keira Knightley), the daughter of a prominent Russian Jewish family, is admitted into Burghölzli mental hospital in Switzerland, kicking and screaming as mental patients often do in movies like this. One of the doctors there, Carl Jung (Michael Fassbender), decides she’s an ideal test subject for Freud’s new theory about therapists treating patients by talking about their problems. His method works: Sabina’s condition improves markedly after she details the physical abuse that she has suffered at home. Then she and Jung start having sex, and their emotional lives and his career become ensnarled over the ensuing nine years.

Sabina’s story is fascinating — the real Spielrein went on to become a leading psychologist herself — but the filmmakers devote more attention to Jung, a husband and father chafing at the limits of his bourgeois life. The doomed romance between these two is supposed to provide the film’s emotional power, but the actors can’t carry it off. Knightley twitches ferociously, especially in the early scenes, and while she commits wholeheartedly to the role, her work still seems overly calculated for effect. Opposite her, the ubiquitous Fassbender responds with an appropriately careful performance as a man torn between his urges and his duties toward a continually pregnant wife (impressive Canadian newcomer Sarah Gadon) who embodies everything he’s trying to escape. In his eyes, you can see the Sturm und Drang roiling under this man’s exquisitely respectable facade.

Sabina’s case inspires Jung’s first face-to-face meeting with Sigmund Freud (Viggo Mortensen) before ultimately and unwittingly driving a wedge between them. Freud turns out to be the most layered character here. An expansive and generous mentor, he tells Jung early on, “I simply opened a door. It’s for young men like yourself to walk through it.” That eventually gives way to a dogmatic streak in the older man, who isn’t above pettiness in the face of constant reminders that Jung is much wealthier than he. When Freud meets Sabina as a colleague late in the film, he tells her flatly, “Put not your trust in Aryans.” You wouldn’t figure that the same actor who played Aragorn would be a natural fit to play Freud. However, Mortensen consistently does his best work for Cronenberg (Eastern Promises, A History of Violence), and he effortlessly slips into the role of an urbane intellectual who’s driven by undercurrents of resentment.

The film is adapted from Christopher Hampton’s play The Talking Cure, which in turn is based on John Kerr’s biography A Most Dangerous Method. Despite having only a passing familiarity with the history of psychology, I found it easy to follow Hampton’s delineation of Spielrein’s contribution to the nascent field (connecting the sex drive to the death drive) and his hinting at the weirder edges of Jung’s thought (his interest in telepathy and parapsychology). These accomplishments coexist uneasily with the character of Otto Gross (Vincent Cassel), a debauched psychologist-turned-patient who encourages Jung to indulge his sexual desires. This person did exist and apparently played this part in Jung’s real life, but on the screen he still comes across like an unfortunate dramatic contrivance.

Cronenberg’s direction is customarily frank about sex, including the scenes in which Jung brings Sabina to orgasm by spanking her. Yet there’s a muted quality to this psychodrama, and I’m not sure whether it’s the period setting, the director’s advancing age, the uptick in other sexually frank films in our theaters, Howard Shore’s piano-heavy score (which admittedly does an excellent Brahms impression), or something else entirely that’s responsible. Whatever it is, this film is missing the rich psychosexual subtext and the frisson of Cronenberg’s 1980s masterpieces like Scanners, Videodrome, and The Fly. Those movies played with fire. Despite its title, A Dangerous Method never feels that way.

Starring Keira Knightley and Michael Fassbender. Directed by David Cronenberg. Written by Christopher Hampton, based on John Kerr’s book and his own play. Rated R.