Glenn Close has been trying to get Albert Nobbs made into a film since 1982. Before she delivered any of the screen performances that made her famous, she acted in a stage adaptation of a short story by the Irish writer George Moore and became obsessed with this tale of a woman who disguises herself as a man. You can now see the results of her four-decade project, with Close co-writing the script as well as playing the lead. Clearly this is a labor of love, though it’s made with such an absence of passion that you wonder why she bothered. 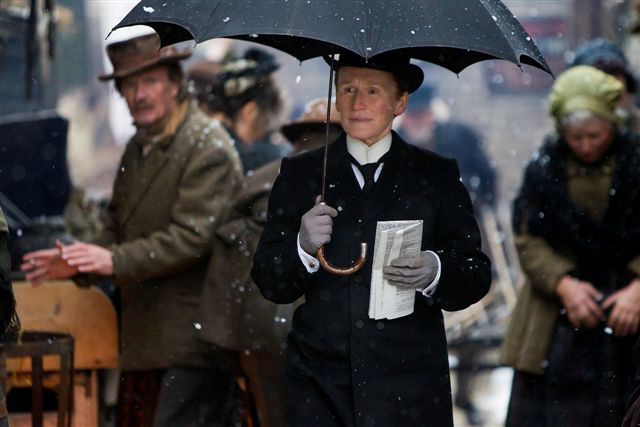 Albert (Close) is a diminutive, laconic, exceedingly polite butler at one of Dublin’s fancier hotels in the early 1900s. After decades of working at similar lodgings in Britain’s great cities, Albert has cautiously squirreled away almost £600 cash beneath the floorboards of his room. No one suspects this, not the hotel’s venal owner (Pauline Collins) and not the coterie of manservants, maids, and cooks who live in the hotel along with Albert. Still less do they suspect that Albert is secretly a woman.

Why hide her gender? We get a story about an unspecified sexual trauma Albert suffered as a girl, but it does little to explain why Albert reacts by living life in this specific way. The filmmakers seem insistent on Albert remaining fundamentally unknowable; Close sets her face in an inexpressive mask during all the scenes when Albert interacts with other people. That’s fine, but it’s one thing to render the main character as an enigma and another thing to give off the impression that there’s nothing going on underneath his impassive surface. Our one glimpse of Albert’s deeper yearnings is in his hesitant pursuit of a young chambermaid named Helen (Mia Wasikowska), and it isn’t convincing. We don’t understand why he carries on when Helen shows such scant interest in him. So little is there to Albert, you understand why Helen prefers the hotel’s selfish, abusive, but handsome repairman (Aaron Johnson) who’s closer to her age.

A gender-bending lead performance is a classic Oscar stunt, and this one has scored a nomination. Nevertheless, Close has the film stolen out from under her by the similarly nominated Janet McTeer, who portrays a house painter named Hubert who is also a woman living publicly as a man and discovers Albert’s secret. Hubert is more comfortable in his skin and has even taken on a wife (Bronagh Gallagher), and McTeer brings a louche, masculine swagger to the role that gives the film a much-needed dose of personality. In pointed contrast to Albert, we’re charmed by Hubert’s dashing sense of humor, and we feel his grief when tuberculosis takes away his loved ones. Why the movie finds Albert more interesting, I’m sure I don’t know. Under Rodrigo García’s overly scrupulous direction, Albert Nobbs too often takes its cue from its title character: recessive, dull, and eager to fade into the background lest anyone take notice.