You might not recognize Mike Shropshire’s image on the video clip — avuncular, face framed by thinning gray hair — but you may recall the name. Shropshire’s byline ran over sports columns and feature stories in the Fort Worth Star-Telegram, The Dallas Morning News, Playboy, Sports Illustrated, D magazine, and elsewhere for 35 years.

In the video, he reminisces about the early years of the Texas Rangers baseball club, name-dropping a little — Billy Martin, Dan Jenkins. His memories were trotted out last week as a promotional piece for The Sports Page, a comedy by local playwright Larry Herold that premiered at Stage West Theatre last week. The play is set in the mid-1960s, near Shropshire’s heyday as a sports writer. 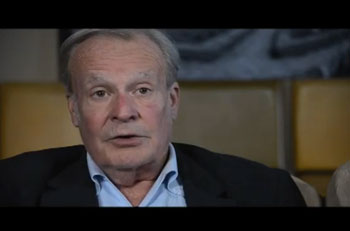 The clip includes one section by Shropshire that is drawing protests from women journalists around the country. In it, Shropshire talks about the “first woman journalist I ever encountered,” who worked for a radio station and who happily had sex in the showers with “four or five” Rangers players one night in 1975.

What’s more, Dietrich admits that he hoped the inclusion of Shropshire’s salacious charges would create controversy to promote the play. As a documentarian, he said, he doesn’t have to follow the same rules as a journalist. The video, however, is being used as promotion for a play, not as part of a documentary, stand-alone film.

The offensive nugget has put Shropshire all over the internet, incensing women and apparently titillating some men. Commenters alternately raged and guffawed on D magazine’s FrontBurner blog after Executive Editor Tim Rogers, an erstwhile colleague of Shropshire, posted the video on Feb. 8 with a short story.

The Dallas Observer’s Robert Wilonsky wrote a neutral introduction and posted the clip, with four others, on that newspaper’s web site. The “gang-bang” video has gone DFW-viral in less than a week. “Boys will be boys,” commenters suggested (wink-wink, nudge-nudge), but many women journalists, especially sportswriters, are furious.

Melissa Ludtke, executive editor of the Schuster Institute for Investigative Journalism at Brandeis University in Massachusetts, heard about the video via the members-only listserv of the Journalism & Women Symposium, a national professional organization.

“It’s wrong for these Dallas news organizations to post something like this,” she said. “It’s just disgusting and goes against every aspect of decency.

“First of all, to charge a particular person anonymously but yet indicate this was one of the only women in that area covering this sport for radio, is reckless,” she said. “If Shropshire knows the name of this reporter, he ought to give it, and that person ought to have the opportunity to respond. … Not one player is named. There is absolutely nothing in there to give it one shred of credibility.”

Sexist treatment of women sportswriters is familiar ground for Ludtke. Covering baseball for Sports Illustrated in the mid-1970s, she was banned from team locker rooms and couldn’t sit with the guys in the press box. That all changed when she filed a federal lawsuit against Major League Baseball and then-Commissioner Bowie Kuhn. She won the landmark case in 1978, establishing equal access to locker rooms for women reporters.

Dietrich, a Fort Worth-based actor with a fledgling commercial videography business, agreed that what Shropshire said was “outlandish.” But, he said, “My platform is not to show whether this is true or not true. I would be lying if I said we put that part of his interview in without realizing it would be controversial. We hoped to position it to create dialogue and questions and conversation.

“If an audience is outraged or interest is piqued, then I would encourage our audience to go out and continue the conversation.”

Stage West producing director Jerry Russell could not be reached for comment about the video and whether its use is an acceptable method of attracting audiences.

Herold used his experiences as a sportswriter back in the day as inspiration for his play’s focus on two crusty newspaper sportswriters at the Dallas Cowboys training camp in 1966. In the play, he treats the dramatic changes of the time — televised sports, women sportswriters, and arrogant athletes — with humor and sensitivity.

But he defended the use of Shropshire’s story in the video as being “Mike’s choice” and suggested that perhaps the video is helping sell tickets at Stage West.

“Every seat was filled on opening night,” Herold says. “That’s very unusual for a Saturday night opening at that theater.”

Shropshire, however, is anything but happy about the video and the response to it.

“I’m happy for the play’s success,” he said from his home in Dallas’s Preston Hollow neighborhood. “But I kinda feel like Rick Perry having to explain myself after a terrible debate performance. Anything I say about that video will make it worse.”

He said that after a bit of reflection on his inflammatory remarks, he contacted Dietrich with a request to “expunge those remarks.” Ten days had passed since the shoot, and “by then it was too late,” Shropshire said. He’d like to make amends now.

“The person I was talking about was not an accredited media person,” he says. “What she was, or what she claimed to be, was a freelancer working for a rock-and-roll radio station. I realize I created the [inaccurate] impression that she was an accredited writer assigned by a real news organization.”

Tim Rogers defends D’s decision to post the video without examining the truth of Shropshire’s statement. “Mike Shropshire is no shlub,” he says. “He’s a veteran sports reporter, and he writes books, so when we get something like this, it’s newsworthy. We put it up for our readers because it’s news.”

Rogers pointed out that he posted a rebuttal of sorts in a follow-up entry on Frontburner. Rogers made a call to a retired Texas Rangers player from the 1975 team and asked him “about Shrop’s story that a female reporter got ‘gang-banged’ in the clubhouse shower.” According to Rogers, the unidentified player hemmed and hawed and then concluded, “In a word, if I had to say whether or not that ever happened, I would easily say no.”

The video of Shropshire is part of a series featuring sportswriters who worked in North Texas during the timeframe featured in the play. A different clip will be rolled out each week for the run of the show.

“It’s done for movies all the time,” Herold says. “Why not create some videos just like the film trailers used to promote movies?” A slick, trailer-style video on Stage West’s web site (www.stagewest.org) introduces the play’s characters, interspersed with action shots.

Ludtke is still fuming. “Sexuality and sensuality were not on our minds when we were doing our jobs,” she said, mentioning some of her peers — pioneering female sportswriters such as Mary Ellen Garber, Betty Cuniberti, Lawrie Mifflin, Lesley Vissar, Robin Herman, and Jane Gross.

“Lawrie said it best,” Ludtke added. “She said, ‘Locker rooms are grubby, smelly, disgusting, exhausting, pressure-filled places that couldn’t possibly be thought of as a sexual situation.’ Women were doing this work because they knew how to do it, they wanted to do it, and they did it well despite the various challenges put in their way.”

If Dietrich and Herold are unrepentant, Shropshire is not. “If you can set the record straight,” he said, “I can dare to show my face in the neighborhood again and possibly I can remain married for another year.”