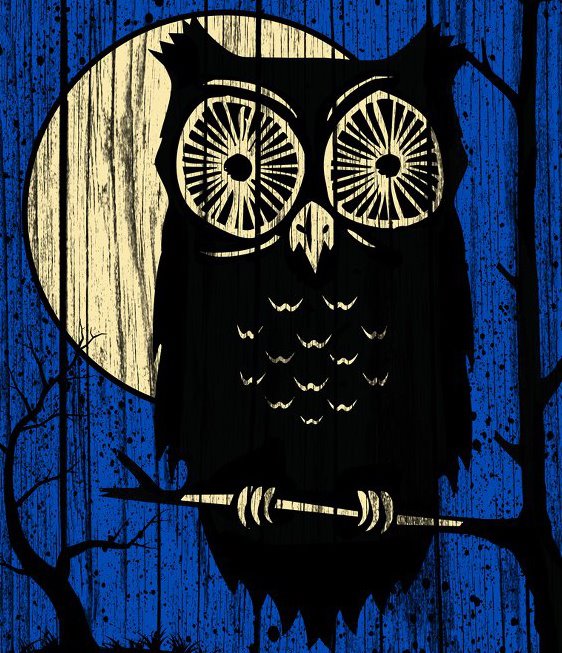 I wasn’t born in a bar, but I might as well have been. I do all of my best work there. (Ask anyone who knows me. You’ll learn that being hilarious, handsome, and 10 feet tall is definitely an artform.) In my eons of bar travels, I can’t recall ever having an experience quite like the one I had a couple of Thursday nights ago at the recently opened Boiled Owl Tavern on the Near South Side.

Located next to Yucatan Taco Stand on West Magnolia Avenue, the Owl –– as it will forthwith be affectionately known in the local patios, as decreed by me –– is a sneakily expansive space: a large cigar box divided into several smaller boxes, a.k.a. rooms, creating the impression of a low-slung, seedy neighborhood joint, replete with dim lighting, comfy seating (couches, high-tops, four-tops), a billiards table with the requisite assortment of spears, I mean, “pool cues,” and partitions suitable for lying in wait behind for that punk who still owes you 20 bucks. However, describing the Owl as anything but a low-slung neighborhood joint would be insincere. Leave out the seedy part. The Boiled Owl is very friendly.

On the night of our visit, we shared the place with about a dozen other folks, most of the young and arty-farty persuasion, though a couple of young business-casual guys had gathered on the Owl’s West-Magnolia-facing patio. Steve didn’t comp the wife and me any hooch (jerk), but he humored us by taking our occasional (ceaseless?) requests for more of that honey-brown soft-rock. Baby, come back indeed.

At one point after delivering some (really inexpensive) Rahr drafts to us, Steve told us about a producer-friend of his who recently bought the production console used by The Commodores in the ’70s. “When he took the cover off,” Steve said, “there was all this blow residue beneath!”

“Easy Like Sunday Morning”? Hardly. But The Boiled Owl Tavern is definitely a “Saturday in the Park.” –– Anthony Mariani

If we are to base friendships on an age-old criterion –– “Would he or she pick you up from the airport late at night?” –– then The A-Train doesn’t have many friends. Please. No tears. Drinking buddies? Yes. Underlings frightened into acquaintanceship with me by my enormous power, fame, fortune, and kickass glossy business cards? Oh, yes. But friends? Eh. At least not many of the pick-you-up-from-the-airport kind.

All of this is a roundabout way of saying that, well, I have no compunction calling out my drinking buddies for, well, their fear of cool, fun things. A professional drinker (and, OK, an art critic), I’ve been going to both Gallery Nights –– spring and fall –– pretty much every year since my arrival in Fort Worth 10 years ago. I’ll run into my arty-farty drinking buddies on Gallery Nights, sure. But the people who drink with me the other 364 days of the year? Not a one.

Iz a puzzlement. You’ve got people handing out our favorite portable pastime, booze (the other is despair), for free, yet my daily drinking buddies would rather pay for booze in some smoky bar?! Yes, the art on Gallery Nights is mostly exceptional, the people are mostly civilized if a little, y’know, insular, the free food is free, and, most importantly, the vibe is the kind that undoubtedly inspires F-Dub civic pride in even the hardest Dallas-envying heart. But c’mon. Free booze!

The crappy economy has put a little damper on all of that free frosty refreshment. I’ve noticed over the past couple of Gallery Nights I’ve had to ask for my complimentary hooch –– it used to be offered. But after some tragically hip gallery worker bee hands me my rightfully earned beer without saying a word and while simply oozing contempt, I never mind scoffing and saying quietly to him through a smirk, “You know who I am?” And then after he says, “No, pfft,” I also never mind pinning his scrawny ass up against a wall by his stupid hipster-band t-shirt with one hand (the other’s on my beer, remember?) and screaming in his face, “I’m your worst nightmare, maaan! I’m the free-weekly art critic. I can break you, brah!”

A’hem. I also only mind a little the reduction in wheels-off bacchanals. Some Gallery Night parties used to swing ’til the early morning hours, if I recall correctly. My liver doesn’t mind at all.