A Massachusetts congressman is calling for an investigation into the management practices of the Nuclear Regulatory Commission’s Arlington office after inspectors there reported retaliation against employees who pushed for aggressive safety measures.

The allegations don’t refer specifically to the Comanche Peak Nuclear Power Plant near Fort Worth, which that office oversees, but the report says inspectors are working within a “corrosive environment” that is impairing the “effective oversight of the commercial nuclear industry.”

Markey said the complaint confirmed his own fears about systemic problems within the federal agency. Those fears grew after last year’s catastrophic failure of the Fukushima Daiichi nuclear plant in Japan, which resulted in massive evacuations, potentially lethal radiation for miles around the plant, and still-undetermined repercussions for the region.

“These allegations, if true, are appalling,” Markey wrote in the letter. “I have long been concerned by the commission’s voting record on safety matters… The frequency with which you are outvoted on nuclear safety matters by your fellow Commissioners seems to suggest that they do not take the safety lessons of the Fukushima nuclear disaster or other safety recommendations made by NRC’s technical staff and advisory bodies seriously.”

Markey then requested information to determine if the allegations are true and if so, how the commission plans to address them.

Victor Dricks, spokesman for the commission, said the agency would review the issues raised in Markey’s letter and respond to Congress with a letter. He refused to comment further.

Markey has apparently been active in addressing concerns about the Nuclear Regulatory Commission (NRC) since at least 2003, when he took up the cause of three Texans who lost their jobs after they reporting wrongdoing in the Arlington office.

The Comanche Peak plant announced in 2008 that it would add two reactors over the objections of local residents, environmental groups and State Rep. Lon Burnam.

Neither Markey nor Burnam could be immediately reached for comment. 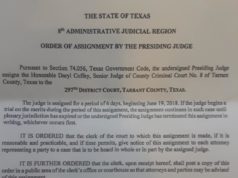