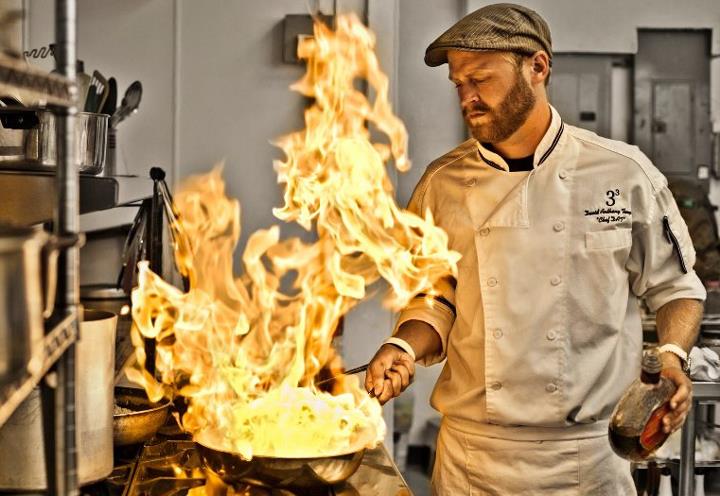 Also known as Chef DAT, David Anthony Temple brings his first pop-up restaurant to Fort Worth this evening with Dining in the Park. He’ll create a five-course meal with local seasonal ingredients. Cocktails by The Usual owner Brad Hensarling and music by Telegraph Canyon’s Chris Johnson will go with the food. Service starts at 7:30pm at Fort Worth Food Park, 2509 Weisenberger St, FW. Tickets are $75. Call 214-714-0892.

The lumpily named actor Benedict Cumberbatch is fast developing a higher profile thanks to his roles in recent films War Horse and Tinker Tailor Soldier Spy, not to mention the BBC TV update of Sherlock Holmes. You can see also see him in Frankenstein, a broadcast of a stage version of Mary Shelley’s novel, in which Cumberbatch and Jonny Lee Miller switch off playing the title character and his monster. The broadcast is at 2pm and 7pm at Modern Art Museum of Fort Worth, 3200 Darnell St, FW. Tickets are $10-18. Call 817-923-3012.

Kids with an interest in ballet will want to see First Position, Bess Kargman’s documentary about six contestants in the Youth America Grand Prix, a competition for dancers ages 9 to 19. The kids are a personable bunch, including a boy from Colombia living in New York and an adoptee from Sierra Leone who’s frequently the only black dancer in the room. The film screens Fri-Sun at Modern Art Museum of Fort Worth, 3200 Darnell St, FW. Tickets are $6.50-8.50. Call 817-738-9215.

The Oklahoma-based theater troupe L.I.P. Service takes up residence at Arts Fifth Avenue for six performances of Jim Leonard Jr.’s play The Diviners, which is set in a small Indiana town where a mysterious stranger arrives with noble intentions and a shadowy past. The play runs Jun 22-Jul 1 at 1628 5th Av, FW. Tickets are $15. Call 817-923-9500.

In a short period of time, Pantagleize Theatre has established its identity as a producer of late 19th- and early 20th-century theater productions, a body of work that tends to be neglected by the other troupes here. This weekend Pantagleize lifts the curtain on Georg Büchner’s Woyzeck, a tale of madness, murder, and economic exploitation more familiar in Alban Berg’s opera version. The play runs Jun 21-Jul 1 at 1115 W Rio Grande St, FW. Tickets are $12-20. Call 817-810-0850.

You can’t say that the footage from Linkin Park One Night Concert Event: Recorded Live in Berlin is stale. The concert movie is of a live performance by the Southern California rap-rock band that was shot in Germany only 20 days before the film screens in theaters. The screening is at 7:30pm at various theaters; check Calendar for locations. Tickets are $12.50. Call 818-761-6100.

A book signing at a Chick-Fil-A — how can we resist? Fort Worth native Laura Eckroat turns out to sign copies of her memoir, Went Out to Get a Donut, Came Back With a Muffin. The book is not about baked goods but rather Eckroat’s work as a dog rescuer, inspired by a stray that she named Muffin. The signing is at 5:30pm at 6556 Lake Worth Blvd, Lake Worth. Admission is free. Call 888-361-9473.