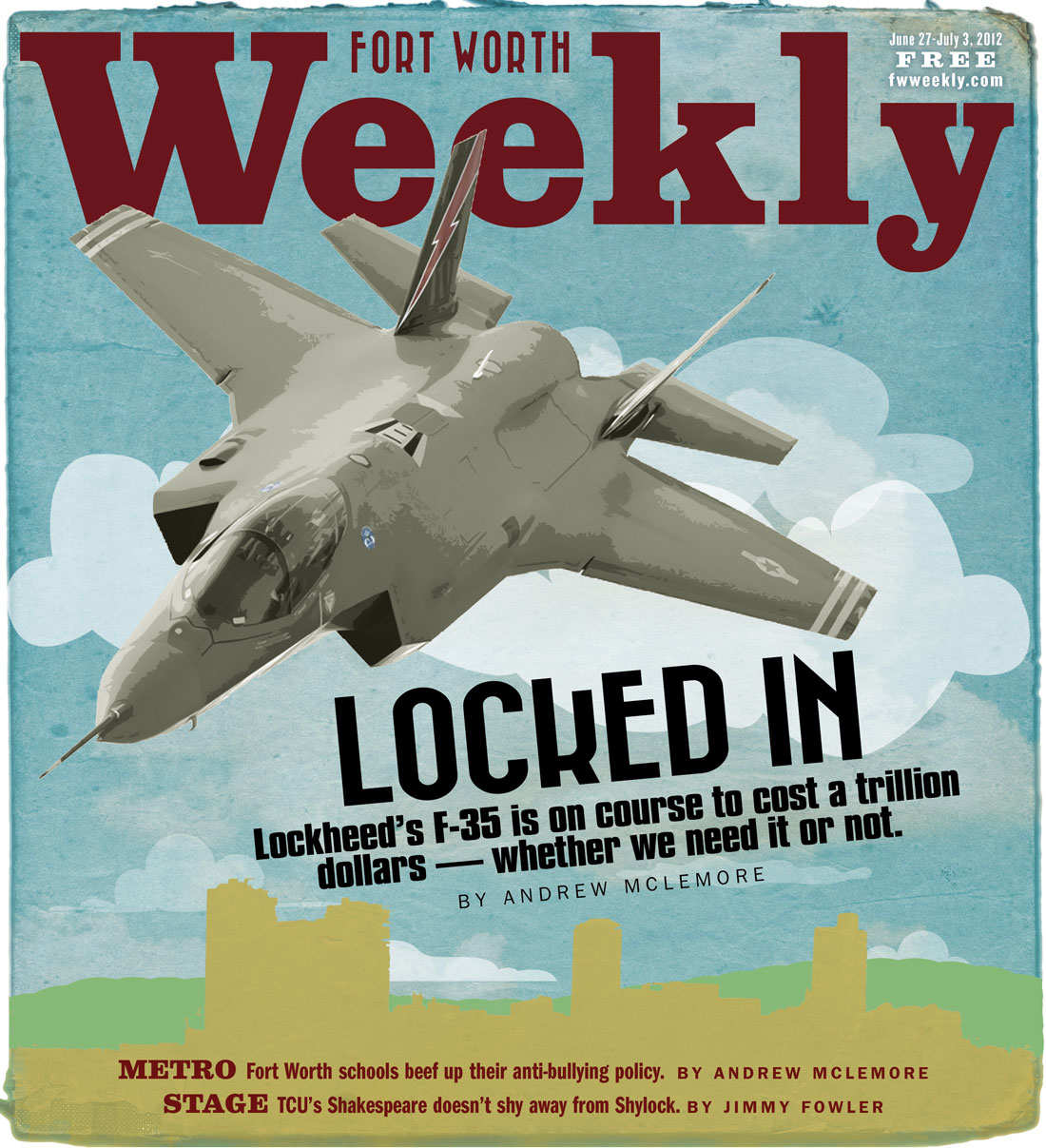 The bold red letters –– ON STRIKE –– etched themselves into the dull grays of an overcast morning.

The 20 striking employees of Lockheed Martin marched mostly in silence across Lockheed Boulevard, crossing each time the light turned red and lifting their signs high against the sky. Looming above them was the signature cobalt blue of the corporation’s entranceway, a massive arch and tailfin emerging from the ground like the shiny skeleton of some long-buried airplane.

It was Week 8 in the strike by 3,300 unionized workers against the giant defense company. The union opposed the company’s plans to stop offering traditional pension plans to new workers.

Striking worker Tootie Boyd watched a pint-sized Smart car drive into the Fort Worth manufacturing plant where many of the strikers have worked for decades. “We could have bought one of those by now,” said Boyd, referring to the two months of striking and no paychecks.

Lockheed workers may not be able to afford tiny cars, and perhaps Lockheed indeed cannot afford traditional pension plans for its workers. After two months, the two sides reached an agreement June 23, though the details haven’t been announced yet.

Regardless, it’s been an odd fight, played out in the context of the most expensive weapons program in history, where each plane may end up costing as much as $200 million, and the full program is likely to cost more than twice what the United States government spent last year on Social Security benefits.

The F-35 Joint Strike Fighter is the Fort Worth plant’s primary product. It’s a weapons program that critics believe is poorly thought out and largely unnecessary for the continued air supremacy of the American military. Opponents say the F-35 is sucking up so much of the federal budget that it’s making it even more likely that Congress will decide to ax spending on things like food stamps, children’s healthcare, and Medicaid, just to pay the Pentagon’s bill.

With the F-35, for the first time, three branches of the U.S. military are placing their fighter-plane eggs in one basket. If there are problems with the F-35’s performance in the future, the Navy, Marines, and Air Force will all feel the effects. What’s more, some military critics say it’s the wrong plane for fighting the likely wars of the future.

U.S. Rep. Todd Akin, a Missouri Republican, is one of several members of Congress questioning why, after 20 years of aircraft development, there is still no solid date for widespread deployment. Many aspects of development remain “behind schedule and risky,” requiring unprecedented annual payouts of $13 billion through at least 2035, according to a March report from the U.S. Government Accountability Office. This country and others have cut back their orders of the plane.

The U.S. Senate Armed Services Committee said in a report that it is “concerned about production quality and whether it is sufficient to ensure the delivery of JSF aircraft to the U.S. and its allies at an affordable price.”

The already-massive costs of the program have nearly doubled in the last decade, and Lockheed is under the gun to show that it is saving money somewhere. Ergo, the tightening of workers’ benefits.

[pullquote_right]Should Congress cut food stamps or the F-35?[/pullquote_right]“The contract offered to the union reflects the realities of the defense business today: that we’ve got to reduce our costs,” company spokesman Joe Stout said.

But here’s a broader reality: Despite the increasing criticism, pressure from the military and Congress, and continuing problems with the plane, the chances are slim that the program will be stopped or even significantly cut back. With billions of dollars already spent on the project and Lockheed spending millions more on lobbying Congress, the plane may have reached an unstoppable momentum.

If you ask Lockheed, things are going swimmingly.

“We are addressing issues and applying them as we continue to move forward,” said another company spokeswoman, Laurie Quincy, adding that the F-35 is the most complex fighter plane ever built. “Nothing like this has ever been done before.”

Whatever the program’s price tag, politicians –– and therefore taxpayers –– will end up paying it, said Chris Hellman of the National Priorities Project, a nonprofit research organization focused on the federal budget. Lockheed, the world’s largest defense contractor, effectively has a monopoly on production of the fighter jet, so the company will likely be flush with cash for decades to come, he said.

U.S. military spending is “a broken system,” and the F-35 has become the best example of it, Hellman said. “There’s no accountability for doing a crappy job. … It begs the larger question of why we can’t develop and buy affordable weapons in this country. That’s what the story of the Joint Strike Fighter is really about.”

The F-35 was conceived to meet lofty expectations.

The various military services require different things from their warplanes: Navy fighters must take off from the dangerously short runways of aircraft carriers and withstand salty, corrosive ocean air, while the Marines need planes that can reach remote areas with vertical take-offs and landings.

Lockheed was supposed to change all that with the F-35 by building three variants of the same jet, replacing nearly every tactical warplane in the armed forces. The idea was that each service would get a new stealth fighter, but the Pentagon would save money because it was the same company and core design for all of them.

It hasn’t worked out that way.

“They thought they could do better than what reality has shown to be the case,” Hellman said. As the F-35 program progressed, the needs of the services diverged, requiring greater development of each variant. “We call it the Christmas tree effect. You develop a program, and then you start hanging all these ornaments on it.”

Many of the plane’s proponents say it’s the next F-16, which was produced in the same Fort Worth plant in the 1970s and is now widely considered the best fighter jet ever built.

Early on, the F-16 program had its critics and cost overruns. In the end it all worked out, and the F-35 will be no different, said Loren Thompson, a founder of the pro-defense nonprofit Lexington Institute and a consultant for Lockheed Martin.

As Lockheed builds more planes, the process will become more efficient and the price will come down.

“That’s where we are now,” Quincy said. “We are improving on the learning curve and reducing costs on the jet through the production.”

“I don’t think the F-35 is acutely needed,” Astore wrote in an e-mail. “Current aircraft such as the F-15E, F-16 variants, F-18 variants, and various Army helicopters, most notably the Apache, can and are doing the job.”