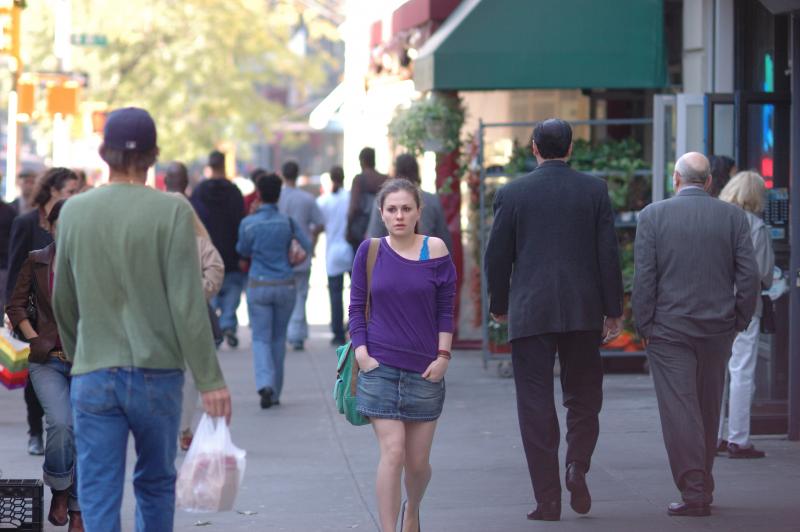 I missed Kenneth Lonergan’s Margaret during the one week it played at the Angelika in Dallas last fall, and I never received one of the awards screeners at the end of the year, so I didn’t get to see this drama until this past weekend. I don’t believe it was one of the best movies of 2011, as some people did. I appreciate the movie’s ambition, though I think I would have had less patience for it had the film come to me in more conventional fashion, promoted as just another piece of Oscar bait. It’s a throbbing hot mess, and like all throbbing hot messes, it’s worth seeing.

The story revolves around 17-year-old Lisa Cohen (Anna Paquin), a girl who lives an ordinary well-heeled life on Manhattan’s Upper East Side until one day she goes looking for a cowboy hat and distracts a bus driver (Mark Ruffalo) who happens to be wearing one. He runs a red light and kills a woman in the street (Allison Janney). For obscure but understandable reasons, Lisa lies on her initial statement to the police and tells them that the driver didn’t run the light. She spends the rest of the movie trying to make amends.

If you missed all the controversy over this movie’s tortured history, the New York Times‘ recent profile of Kenneth Lonergan has a pretty good blow-by-blow account. Here’s the 75-word version: In 2006, Lonergan signed a contract to make a film on any subject as long as it ran under two and a half hours. He shot it and edited it down to three hours. Then he couldn’t bear to part with another second. It all resulted in a legal fustercluck, with everybody suing everybody and the film not seeing the light of day for five years.

I usually side with the artists in these instances, but not here. This isn’t a case of the studio arbitrarily telling the filmmaker, “This is too long, cut it down.” A contract is a contract, and while Lonergan was likely wronged in the aftermath of the dispute, he could have avoided it all by holding up his end of the deal in the first place. And there’s a hell of a lot of material that he could have cut. The subplot between Lisa and her estranged dad who lives on the West Coast (played by Lonergan himself) is well-written, but it doesn’t add much to the overall story. The same goes for Lisa’s sexual dalliance with one of her teachers (Matt Damon) and her encounters with an ineffectual English teacher (Matthew Broderick), even though the latter provides the movie with its title by reading Gerard Manley Hopkins’ “Spring and Fall.” These things are why DVDs have deleted scenes on them.

There is one scene in this movie that made me say, “Wow.” It’s the early one between Lisa and the pedestrian, as the girl tries to comfort the dying woman, whose leg has been sheared off by the bus’ wheel. The acting by Paquin and Janney here is fantastic, as the terrified woman clutches at the girl and reaches out blindly because she can’t see any more. Janney is only on screen for a few minutes, but her fear and desperation make you understand how the encounter would leave such a mark on Lisa.

If the rest of the movie is hard to warm up to, it’s because Lisa is even more annoying than Sookie Stackhouse herself. That’s one thing this movie does really well, though. Lisa comes to believe that everything that happens to her is of earth-shaking importance, and though that’s not an uncommon belief among teenagers, she’s quite a bit more hard-headed than most teens. She gets into shrill arguments with an Arab-American classmate (Hina Abdullah) over the meaning of the 9/11 terrorist attacks. She acts passive-aggressively toward her mom (J. Smith-Cameron). She goes to the bus driver’s house and confronts him, which only succeeds in enraging him and his wife (Rosemarie DeWitt). She badgers cops and lawyers with her crusade to get the driver fired from his job. She curses out the dead woman’s relatives because they’d rather take a monetary settlement than see the driver fired. At one point, she takes such ownership of the tragedy that the dead woman’s best friend (Jeannie Berlin) gives Lisa a well-deserved smackdown: “We are not supporting characters in your fascinating life!” Lisa, of course, only wonders why the woman is suddenly acting like a bitch. If you’re not a fan of Paquin’s acting, this movie won’t make you into one, but she does fully commit to the character’s unpleasantness and her misguided zeal to see her own idea of justice done.

The whole thing is carried out at an operatic pitch: Indeed, the movie includes two scenes at the Metropolitan Opera, in which we’re treated to Christine Goerke singing “Casta Diva” and Renée Fleming and Susan Graham singing “Belle nuit, ô nuit d’amour.” The movie constantly threatens to tip over into excess but never does. Lonergan does indulge in some 9/11 parallels, with numerous menacing shots of skyscrapers and airplanes and background extras referring to the attacks. I wish he had left those alone; at best they only date the film, and while Lonergan might be commenting on Lisa’s inflated sense of her own importance by juxtaposing her efforts with real tragedy, it doesn’t quite take.

Still, not too many filmmakers take quotidian life and stretch it into grand-opera proportions the way Lonergan is willing to do. It’s interesting to see him try, and his attempt yields some good things. It’s certainly miles better than that awful and shameless other post-9/11 drama from last year, Extremely Loud and Incredibly Close. If you’re looking for an ambitious piece of work by a gifted writer who appreciates what actors bring, Margaret fills the bill.