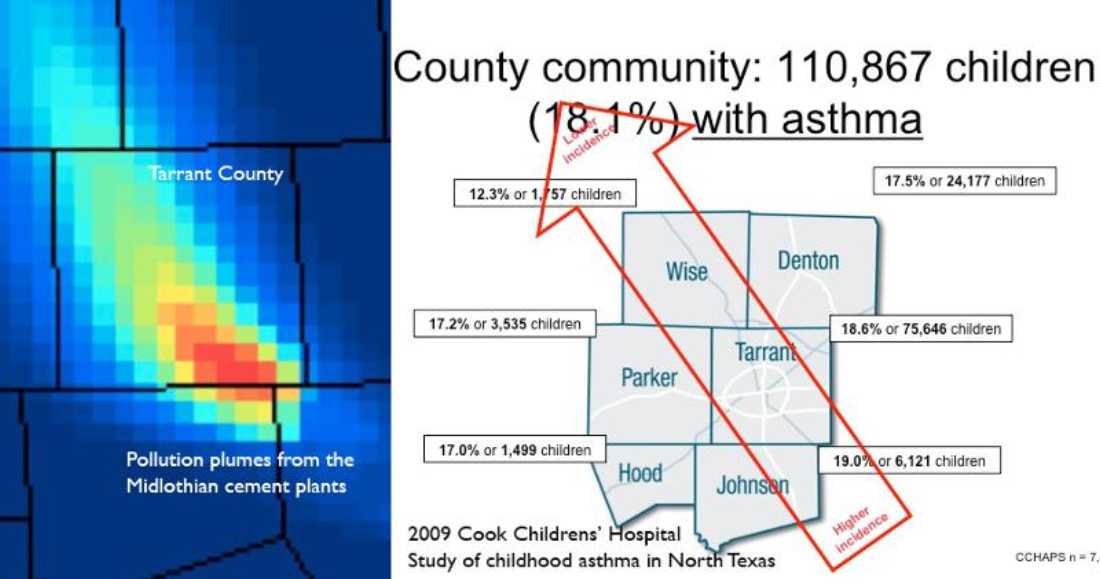 The Only Hearing in the Nation on EPA’s Proposed Weakening of Toxic Air Pollution Standards for all U.S. Cement Plants

Fort Worth’s air is “under attack”, according to Jim Schermbeck, director of Downwnders At Risk. The Environmental Protection Agency is proposing to weaken the strong toxic air pollution standards that it set in 2010 for all the cement plants in this country — even before the  new standards have been put into practice, according to Schermbeck.

Three of the largest and dirtiest of these plants, TXI, Holcim, and Ash Grove, are on the outskirts of Midlothian, a small Ellis County town south/southeast of the Metroplex’s millions of inhalers. It is the largest concentration of cement plants in the country, and Cowtown  is directly downwind. These giant soot producers whose polluted air blows our way most of the year, are the largest single source of industrial air pollution in the region, according to EPA data.

Numerous studies show that this dirty air is a primary cause of some of the country’s most life-threatening health problems, from heart and lung disease to asthma in young children, a disease that is increasing here at alarming rates.  The EPA’s own data show that a delay in implementing these rules would mean 1,500 lives lost a year throughout the nation. “We know that some of those lives will be lost here.” Schermbeck said.

Moreover, he added, “If  Barack Obama is not president in 2015, these rules may never see the light of day again.”

Yet, incredibly, after finally committing to strengthening the weak rules governing what comes out of these plants smokestacks, the EPA is backing away, by not only proposing to delay the implementation for two more years, but to weaken the rules as well, making them more favorable to the industry.

The only hearing in the country that is scheduled for breathers who want to oppose this delay, will be the one in Arlington, on a workday. Schermbeck, a filmmaker and long-time environmental activist, who has dedicated years of his life to trying to clean up the polluted air that’s blowing into North Texas from Midlothian, has put out a call for folks to sign up with EPA and show up to testify. You will have five minutes.

One elected official from Fort Worth has already signed up. Ann Sutherland, Fort Worth schools trustee, said that while she’s not an “expert,” she is a citizen who is gravely concerned about the increase in asthma among young children. “Whatever I can do to help bring attention to this problem, and to alleviate it, I’m going to do,” the board member said.

“EPA hopes they can weaken these toxic air pollution rules without public outcry,” Schermbeck said in a press release. “To make sure, they have given citizens only one hearing and 13 days notice. They don’t think anyone will show-up. Please prove them wrong. …Our request at this hearing is simple,” he said. “We want the original rules and we want them implemented on the original schedule – next year.”

To get a scheduled slot, e-mail the EPA’s Pam Garrett at garrett.pamela@epa.gov or call her at  (919) 541-7966. Tell Garrett what time you want to speak – morning, afternoon, or evening. She will assign you a specific time so you don’t have to wait.