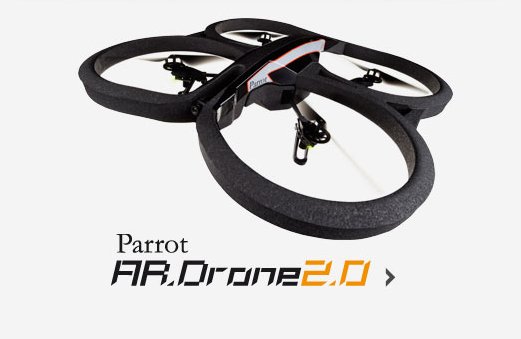 Could there be a better example of how bookstores seem desperate to sell anything that will keep them in business?

As I paid for a couple of magazines at the Barnes & Noble in University Park Village today, I couldn’t help but notice the large glossy box behind the cash registers.

The “AR Drone 2.0,” read the futuristic font above a picture of a black flying machine with four  copter blades. It looked like a huge mechanical insect.

“Is that a drone?” I asked the cashier.

I’d read with fascination a New York Times story in February about a new federal law forcing the Federal Aviation Administration to allow drones, also known as UAVs (unmanned aerial vehicles), to be sold to the public and used in domestic air space.

And now here they are at the closest Barnes & Noble. A commercial drone that can soar up to 300 feet high while taking HD-quality video, now sold next to $30 Harry Potter wands.

They are quickly raising concerns about privacy, as a Stanford University professor made clear to the Times before Congress made commercial drones legit.

“As privacy law stands today, you don’t have a reasonable expectation of privacy while out in public, nor almost anywhere visible from a public vantage,” said Ryan Calo, director of privacy and robotics at the Center for Internet and Society at Stanford University. “I don’t think this doctrine makes sense, and I think the widespread availability of drones will drive home why to lawmakers, courts and the public.”

Some questions likely to come up: Can a drone flying over a house pick up heat from a lamp used to grow marijuana inside, or take pictures from outside someone’s third-floor fire escape? Can images taken from a drone be sold to a third party, and how long can they be kept?

In what will not come as a huge surprise, the anxiety over drones has been mostly drowned out in the excitement over how they make “awesome” Father’s Day presents, or the potential money to be made selling them, or the fantastic ways they can be used by law enforcement.

The Association For Unmanned Vehicle Systems International held its annual convention this month in Las Vegas and talked about how the exciting growth in the industry, the Las Vegas Review Journal reported.

The group’s 2012 market study estimates that global UAV spending will almost double over the next decade, from $6.6 billion annually to $11.4 billion.

Gadget lovers are no doubt ecstatic. Drones are coming to your backyard and apparently, your local bookstore.