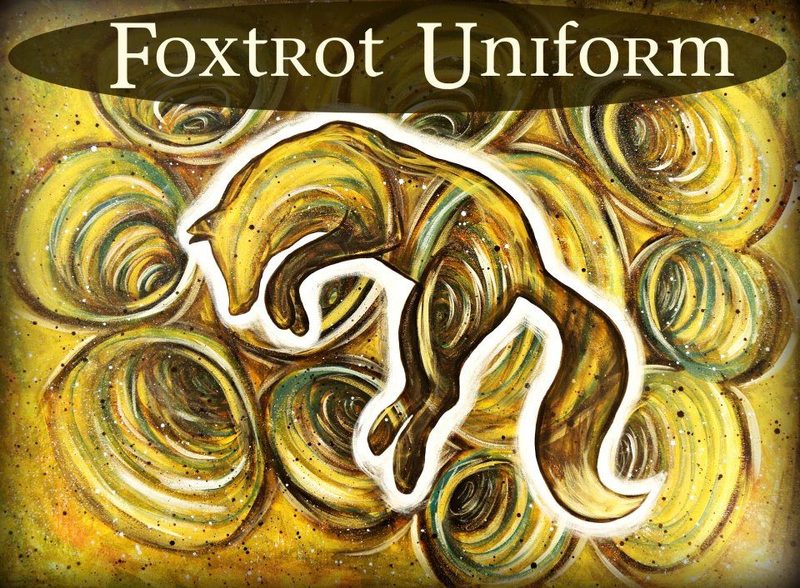 Test and his only other bandmate, guitarist and singer-songwriter (and Fort Worthian) Kenny Uptain, deliver a stunner, an eclectic box of gems in which the band’s knack for down-home blues is reconciled with its predilections for the experimental and downright unexpected.

The boys’ signature feat on Huj! Huj! Hajrah! –– and also perhaps a downside to the 40-minute album –– is the whirlwind pace. Uptain and Test (who also tours with Cooder Graw and The Polyphonic Spree) have an almost preternatural sense of timing. Most of the songs swagger around just long enough before casually exiting stage right.

Others, like the dirge “Edge of the World,” come to an all-too-abrupt end, just as Test’s rumble and Uptain’s soulfulness hit full stride. If any song on the album is poised for commercial success, it’s “Edge of the World,” also arguably the track that best embodies Foxtrot’s strengths: lots of grit, soul, and melody. But in what must have been a calculated move of compositional finesse, the song is buried about halfway through the album.

No matter. Huj! Huj! Hajrah! packs a mighty punch from the get-go. After a short arena-rock instrumental intro that gives these guys-next-door a distinctly rockstar-ish gleam, the first proper track explodes from the speakers. Fueled by Uptain’s throaty, Marlboro-ravaged voice, “Getting to You” is a harmonious blend of the band’s soul and its effervescent, almost honkytonking musical affinities, providing a nice introduction to the band. The lyrical conceits –– addiction, parking-lot hand jobs, nosebleeds –– also entreat the listener to adjust his or her perspective accordingly. This ain’t your father’s blues.

“She Ain’t Got a Care Now,” another of the album’s more familiar-sounding songs, once again is carried by the full force of Uptain’s roar. Not to belabor the point, but if anything sets Foxtrot apart, it’s Uptain’s freakishly sumptuous voice. Few vocalists can achieve the visceral, guttural maturity of this twentysomething frontman.

Not all of the tracks on Huj! Huj! Hajrah! stick to the field-tested Foxtrot script. “Truth” is where the band scratches its inevitable itch to get weird. Nearly a cappella and at just over a minute, the song comes on and fades out in the same smoky exhale before immediately transitioning to “Edge of the World,” which then leads to another crowd-pleaser, “Honey Child.” From there, some of Foxtrot’s more emotive offerings — ones that are borderline poppy, like “Lily White Limp” — arrive in quick succession.

By the time Huj! Huj! Hajrah! concludes, Foxtrot Uniform’s style rings at once more alien and more homegrown than anything you’ve probably heard before. –– Matthew McGowan

One Fingered Fist’s Roaches in the Ashtray

See, Little Timmy? Honesty really does get you somewhere. Sure, that somewhere might be the highly coveted front booth at the White Eagle Deli near Haltom City or a mention in the local alt-weekly (*heart over hand* Gayle Reaves, Editor), but wherever it is, it’s better than the hill behind the gym where you go to sniff glue after skipping class. By being honest to their muses and not giving a single fuck, the four dudes in One Fingered Fist do what many superiorly talented musicians local and beyond cannot: achieve a signature sound.

Hailing from Haltom City, Fort Worth, and Weatherford, the Fist is maybe the only band around that can go toe to toe with the speed-punks at 1919 Hemphill and bong hit for bong hit with the metalheads at Tomcats West. Not only are the Fist’s riffs juicy and speedily delivered (an intoxicating cocktail), but they’re also of a delicious timbre, falling somewhere between Glenn Tipton’s roar and Greg Ginn’s bite. Props to Fist guitarists Johnny Trashpockets and Professor Josh for the sinister, unique sound.

The band has been together for nearly 10 years but has only recently released its first album. Recorded with Dave Willingham at The Echo Lab in Denton, Roaches in the Ashtray is a blink-and-you’ll-miss-it hot slice of blistering in-your-face punk-metal that’s big on rifferama and tightness. And political incorrectness. Let’s just say you might be better off not knowing the lyrics to “Surf N Turf,” “Dodge Ball,” and “Machete Switchblade.”

One of the catchiest tunes is “Cirque Du Soleil Moon Frye (Suck it, Punky),” with its skipping beat, crunching guitarwork, and choral refrain of “Suck it! Punky! Suck it! Punky!” Another ear-worm is “Rocket,” a driving punch in the gut flavored by a wonderfully cheeky and evocative chorus: “I got my Reeboks / I got my knee-high socks / I got a highball filled with Wild Turkey on the rocks / I got my tank top / I got my jean shorts / I got my topical cream for my genital warts / And I’ll share it with you.”

Radiohead, this is not. But it still rules. — Anthony Mariani

Though literally recorded in the part of the house where you park cars, the two Dangits songs on the A-side of this 7-inch are louder, fiercer, and thicker than anything most people would call garage rock. The lead-off track, “Come Alive,” fools you with four ringing chords before changing keys and charging into a breakneck rock ’n’ roll assault led by frontman Mike Noyes’ snarl and guitarist Branden Smith’s sneering leads, sliding over Benji Silver’s jangly low-end attack and Russ Gentry’s relentless skin-pounding. The sonic effect is like lying between the tracks as a train thunders inches above your nose. The second song, “Whatever Gets You High” announces itself with a sleazy riff before leaping into hard-rock fury, reminding you why The Dangits are at the top of the local heavy music pantheon.

Perdition’s side of the split features about five minutes of the band’s signature hooky pop-punk, all singalong choruses and chugging distortion.At times, Andrew Goon and the rest of Perdition sound like the Swingin’ Utters hired them to pick up where they left off. Though Hispaniola, the full-length debut that Perdition put out in April, might have flashier solos, the quartet’s two tracks here would fit right at home on the LP. “Where We’re Going, We Don’t Need You, Garret Dale” gives you a wall of chunky guitars and a sticky chorus, and “Soothsayer Balloon Knot” follows a minor-key verse threaded with Lance Bennett’s punchy, melodic bassline before dropping into a half-time breakdown and a chorus of whoas.

For tightly played punk that sticks in your head long after the beers are all chugged, Perdition is somewhere everyone should go. — Steve Steward