Dredd (R) Faint praise: This is better than the 1995 Sylvester Stallone movie that also tried to bring John Wagner and Carlos Ezquerra’s character to the big screen. Karl Urban takes over as the heavily armored judge, jury, and executioner who administers justice in a dystopian future society. He and a recruit in training (Olivia Thirlby, sadly miscast as a tough action heroine) are trapped in a 200-story apartment tower controlled by a drug lord (Lena Headey) and her murderous minions. It’s not unwatchable, and there are some surreally beautiful shots depicting the influence of a narcotic that slows down reality. You’d have to say, though, that The Raid: Redemption handled this whole premise better. Also with Wood Harris, Rakie Ayola, Deobia Oparei, Langley Kirkwood, and Domhnall Gleeson.

End of Watch (R) The chemistry between Jake Gyllenhaal and Michael Peña is the best thing in this buddy-cop thriller that thinks it’s more groundbreaking than it is. They portray L.A. beat cops who film themselves as they patrol the city’s meanest streets. Writer-director David Ayer adopts a found-footage look that’s little more than a gimmick, although it does encourage freer and more spontaneous performances from the actors. Gyllenhaal and Peña have an effortless rapport as best friends, and their relaxed banter in the squad car (about coffee, women, and the differences between the social lives of Anglos and Latinos) is even more compelling than the movie’s shootouts and chase scenes. Also with Anna Kendrick, Natalie Martinez, David Harbour, Frank Grillo, Maurice Compte, Yahira Garcia, Cody Horn, and America Ferrera.

Frankenweenie (PG) Tim Burton returns to form with this animated remake of his 1984 live-action short film. Charlie Tahan voices a scientifically gifted middle school kid who uses an electrical storm to bring his beloved dog back to life after the animal is run over by a car. The animation firm of Mackinnon & Saunders provides some nice puppetry, and screenwriter John August makes some inspired additions to the original, like a provocative subplot involving a science teacher (voiced by Martin Landau). The climax shows Burton at his morbidly funny best. All in all, this is good enough to come off as an honest piece of entertainment instead of wheel-spinning pastiche. Additional voices by Winona Ryder, Catherine O’Hara, Atticus Shaffer, Robert Capron, James Hiroyuki Liao, Conchata Ferrell, and Martin Short.

House at the End of the Street (PG-13) It’s the old familiar story: girl meets boy, girl loves boy, girl discovers that boy is keeping his raving maniac sister who murdered his parents locked up in his basement. Jennifer Lawrence plays the new-girl-in-town {girl} here, and Max Thieriot is the ostracized boy whose sweet, sensitive nature beguiles the girl. {, who’s newly arrived in town.} Director Mark Tonderai does a fair job of balancing the romance of the earlier scenes and the action of the later scenes, but he can’t disguise the way the plot falls apart near the end. It’s only Lawrence’s presence that gives focus and depth to this otherwise rampagingly mediocre thriller. Also with Elisabeth Shue, Eva Link, Nolan Gerard Funk, Allie MacDonald, Jordan Hayes, and Gil Bellows. 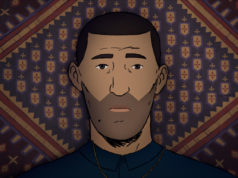 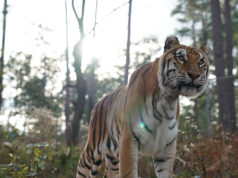 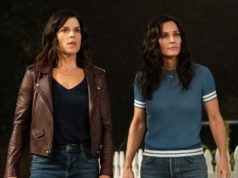