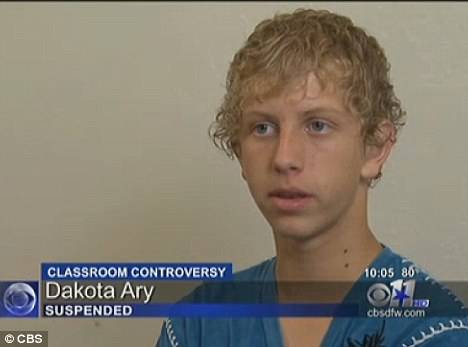 Remember Dakota Ary? He was the teenager disciplined by Western Hills High School last year after a teacher overheard him telling another student that “homosexuality is wrong.”

He and his mom filed a lawsuit against the district, criticized the media and lots of gay rights groups, and generally got pissed off at the violation of his “First Amendment rights.” They raised such a fuss that the school reduced his three-day suspension to a few hours of in-school detention.

Now young Dakota Ary and mother Holly Ary have made a video with the National Organization for Marriage, a group formed in 2007 with the specific purpose of battling same-sex marriage in California.

The organization’s controversial tactics include pitting African-Americans and Latinos against gays in order to prevent laws allowing same-sex marriage.

The teacher who sent Dakota to the principal’s office, Kristopher Franks, was actually suspended and investigated by the district shortly after the incident in September 2011. Franks was later cleared of any wrongdoing. To be clear, it was the school principals, not Franks, who chose to suspend Dakota.

In the video, Dakota and his mother say they were already suspicious of the teacher because Franks had placed a magazine photo of two men kissing on a classroom wall. And it’s not just gay kissing that shouldn’t be shown in classrooms, but any kissing at all.

“It would be just like if you put a Cosmopolitan magazine up on the wall,” Holly said. “You don’t want to put a picture of man and woman kissing, either, especially in a high school classroom.”

The small incident became a national story and the teenager and his mom protest their treatment under the spotlight.

“Dakota is not a bigot. He is not someone who hates gay people,” Holly says in the video. “He’s not a hater in any way. And of all these organizations and companies that promote gay marriage and so on and so forth, for them to come back at him as a child is just ridiculous. I’m extremely proud of the fact that he did stand up for himself.”

The only thing that’s certain about what happened here: Schools have no idea how to handle homosexuality when it comes up in the classroom, either from curious students or hostile ones.