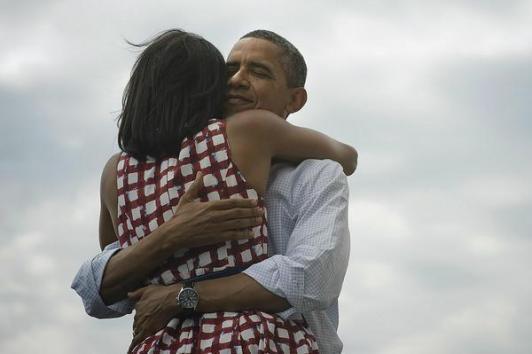 It’s been hard trying to digest the press coverage of the presidential election while covering the film festival. I’ve read many insightful things from all across the political spectrum, but in the end it boiled down to two contrasting pictures I got from the TV networks on election night. They came from the jubilant Obama campaign headquarters and the despairing Romney campaign headquarters. The difference in mood was obvious, but so was this: The Obama crowd had whites, African-Americans, Latinos, and Asians. The Romney crowd was all Caucasian. I scanned the Republican HQ for a single face of color and couldn’t find one. The Obama crowd looked like America as it is now. The Romney crowd, well, looked like the America of the past. The whiteness has even become a Tumblr meme! On Fox News, Bill O’Reilly saw the same thing I did, and he didn’t like it one bit: “It’s not a traditional America anymore,” he said, citing women, Latinos, and African-Americans. “These people want things. And who is going to give them things? President Obama.” O’Reilly is being called out for his racism, deservedly, for behaving as if no white voter ever asked a politician for anything. Still, he’s right about the changes. The voters today are much less white than they were a scant 20 years ago. No wonder much of the media, left and right, has come round to the conclusion that turning Republicans into an exclusive club for straight white Christian men isn’t a recipe for success. Dan McLaughlin at Redstate has a pretty comprehensive list of why the election went badly for the GOP. Meanwhile, Republican consultant said on The View that his party was “a Mad Men party in a Modern Family world.” A Republican making a pop culture reference that’s on point! Well done!

Make no mistake, this is a generational defeat for the right wing. Not only is Obama re-elected, but gay marriage initiatives won out in Maine, Maryland, and Washington state, while a gay marriage ban was defeated in Minnesota. Just think, only eight years after George W. Bush used gay marriage as a last-minute wedge to drive away Kerry voters, and only four years after Obama’s victory came packaged with a stinging Proposition 8 in California, the gays have now scored four high-profile victories in popular votes. Recreational marijuana use is approved in Colorado. Who’s up for a skiing vacation in Aspen this winter? A record number of women are now in the U.S. Senate, and the likes of Todd Akin and Richard Mourdock go down to defeat. (Jezebel is calling them Team Rape. I prefer my own formulation of “the Rapey Republicans,” but I can get behind calling those guys Team Rape.) Tammy Baldwin becomes the first openly gay U.S. Senator, and Tammy Duckworth becomes the first female combat veteran to win a Congressional election.

Obama’s re-election means that health care reform goes forward at full speed. A President Romney probably wouldn’t have been able to roll back the whole Affordable Care Act (indeed, he made noises about keeping the legislation’s most popular provisions), but he could have watered it down significantly. That won’t happen now. Conservatives (and Bill Clinton) actually see Obama’s transformational effect more clearly than liberals, as evidenced by James Ceaser’s postmortem on Weekly Standard. He’s right when he says Obamacare will be to Obama’s legacy what Medicare is to LBJ’s and Social Security is to FDR’s. That’s massive. It also means Obama will now get four more years to fill any Supreme Court vacancies that might come up.

It also means that Republican obstructionism has lost. All the name-calling in the right-wing press has gotten big ratings for Fox News, but Republican politicians have turned themselves into the Party of No for the last four years, and what has it gotten them? A majority in the House. You can argue whether the Republicans abandoned the moderates or vice versa, but the Santorum-Gingrich-Cain-Bachmann talk in the primary season about moon bases and Obama leading a jihad scared off the sane voters in the center. It also forced Romney to adopt “severely conservative” positions that didn’t come naturally to him, and the dance he did allowed voters to see his powerlessness in the face of his base. You don’t have to be a big-government-loving leftie to be nervous at Romney’s suggestion that FEMA be eliminated, especially in the wake of a destructive, deadly hurricane. The Republican primary process no longer allows for centrists — observe the fate of Jon Huntsman — and now we’ve got pieces saying Obama is really a moderate Republican and that Romney could have won if he’d just run as a Democrat.

In the aftermath, many Republicans are saying the right things about how the party needs to reach out to young people and Latinos. But can they? I think they can, though how long it’ll take them to find a way, I don’t know. However, Michael Grunwald at Time argues that the party leadership can’t compromise, because their base voters will eat them if they try, just the way they threw out Sen. Richard Lugar in favor of a tea-party conservative who proved unelectable. The counter-argument to that is John Cornyn pointing out that Republicans of all stripes lost on Tuesday, including moderates like Scott Brown. This will bear watching during the coming Republican civil war. It’s going to be messy, and for outsiders, fascinating.

I missed the comedy on Fox News when Karl Rove insisted that his own network was wrong about Ohio’s election-sealing vote. At the Atlantic, Conor Friedersdorf argues persuasively that Fox News misled its viewers in the days leading up to the election by insisting that the polls were wrong when in fact they were correctly predicting an Obama victory. This is why it’s good to step out of the echo chamber. It’s also why I avoid MSNBC like the plague.

Of course, Rove may have just been upset that his super-PAC raised and spent almost $400 million and got so little in return. They could have more profitably used that money to feed hungry children or invest in medical research. Or they could have just made a big pile of cash, doused it in gasoline, and set it on fire like the Joker did. Everyone’s laughing at the super-PACs now, but there’s still good reason to hate the Citizens United ruling that made them possible. For instance, coal CEO Robert Murray, who gathered his employees together to pray for America’s forgiveness for choosing Obama and then promptly fired 156 of his workers, blaming it on the new president. Other Montgomery Burns types are doing the same crap, too. (More classless behavior in the wake of the election: Ole Miss students chanting racist stuff, like, way to live down to the worst stereotype about your state. It’s not limited to the right, either, with Michael Moore giving thanks for Hurricane Sandy for bringing voters to Obama, which is not only tasteless but also inaccurate. Badly done on all fronts there, Michael.)

Some left-wingers are having a big old sad about the nature of Obama’s victory, one based on tactics and old-school politicking rather than the soaring rhetoric of 2008. Gary Younge at the Guardian says it best about the rhetoric: “You can only elect the first black president once.” As for the tactics, I remember the parts of the last 30 years when the likes of Mondale, Dukakis, Gore, and Kerry led to a lot of liberal moaning about candidates who were qualified to be president but didn’t have the stomach or the skills for a fight when things got tough. Obama definitely has the skills, as we saw this past summer, when he boxed in Romney on gay marriage and then again on the DREAM Act, which hijacked Marco Rubio’s planned legislation and took the Florida Senator out of the picture when Romney was reportedly mulling picking Rubio as his running mate. Rubio wound up attacking his own immigration reform plan because the president had trotted out something similar. Nicely played, Mr. President.

I’m not sad about the way Obama won. Some of my fellow lefties are disappointed because they thought they were getting a messiah. I never subscribed to that idea. I just wanted someone who knew what the heck he was doing, and Obama has mostly been that guy. His administration has been corruption-free (as far as we know) and mostly competent. I wish he’d do more about climate change and regulating big business, but I’m pretty satisfied with his presidency so far, and there’s reason to think he’ll be better in his second term now that he knows the ropes.

Anyway, as unedifying as this past election often was, I’m grateful to it for introducing me to the comedy stylings of Key and Peele. These comedians have finally figured out how to make fun of President Obama. Back when he was first elected, comics complained that Obama gave them nothing to work with. How do you mock a levelheaded intellectual who’s not obviously out of his depth and has a sense of humor about himself? Key and Peele have “Obama” accompanied by an “anger translator” named Luther, who translates his measured remarks into urban slang. These guys operate in the gap between Obama’s cool nature and the Angry Black Man stereotype, and they don’t only target the president’s foes. Check out their hilarious response to Romney’s 47% video, which jabs Arab crowds for the anti-Innocence of Muslims riots and ends with Luther saying “That shit cray!” and “Obama” giving his considered agreement that why yes, that shit is indeed, relatively cray. Here’s to four more years of these guys.