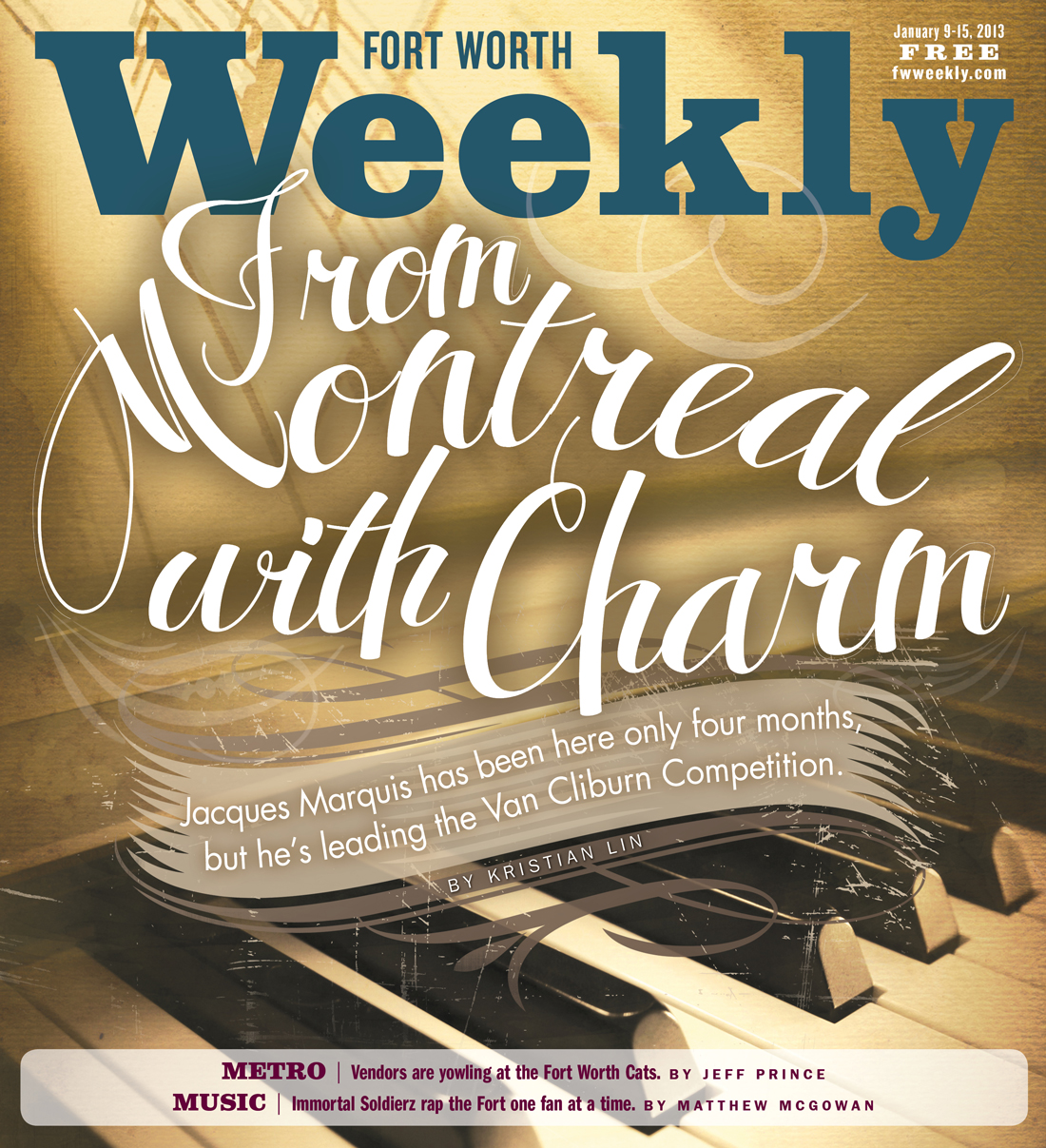 Talking to people in classical music who have worked with Jacques Marquis, the word “charming” pops up repeatedly to describe him. That charm and his other talents will soon be tested: Having never attended a previous edition of the Van Cliburn International Piano Competition, the 48-year-old Canadian will be running the vaunted Fort Worth cultural institution this summer.

Marquis has built his reputation in large  part on the 11 years  he spent as general director of the Montreal International Music Competition, whose past winners include internationally recognized sopranos Measha Brueggergosman and Angela Meade. He joined the Cliburn last September to be the foundation’s executive director, but Alann Sampson’s sudden resignation last November from her position as the Cliburn’s interim president and CEO has left Marquis in charge of the entire apparatus.

The Montreal native describes himself as a numbers and finance guy, but his background in music also runs deep.  A graying man with broad shoulders and a broad smile, he frequently gestures with his hands to make a point. He is nothing if not a lively interview, and if he has any qualms about his position, they don’t show.

He asks me to let him know if he is talking too fast. “I talk even faster in French,” he explains. At one point, he checks with staffers to make sure that the French word “repertoire” means the same thing in English. While demonstrating how to build up a young pianist’s career, he uses pen and paper to draw a big box to indicate an important concert date and then adds five horizontal lines under it that look like steps to indicate smaller concerts leading up to that. Talking about administrators of other competitions, he does brief, amusing impressions of Didier Schnorhk, the general secretary of the Geneva International Music Competition, and Fanny Waterman, the chairwoman of the Leeds International Pianoforte Competition.

“People are asking a lot how I like Texas,” he said. “You have very independent, strong-minded people, which I like. People are very warm, my Latin and French-Canadian side is warm. People in Quebec are welcoming people, and in Texas they are welcoming also.”

Marquis likes to illustrate his points with anecdotes, as when he describes the level of support for the Van Cliburn Competition that he has found in Fort Worth.

“The second day I was here, I went to Starbucks to get coffee. They hear my accent, they said, ‘You’re not from here. What do you do?’ I said I work for the Cliburn. ‘You work for the Cliburn? I go there with my daughter and sister! Wow!’ It is fantastic that people here follow the Cliburn, not just the specialists [in classical music].”

He trained as a pianist at Université du Québec à Montréal, but after a brief stint as a piano teacher, he went back to obtain a bachelor’s degree in business. His first job out of school was as an accountant at the Orchestre Métropolitain du Grand Montréal, the city’s second-biggest orchestra. “When you know an orchestra’s finances, you know what you’re talking about,” said Marquis.

During the next eight years, he rose through the ranks to become both the orchestra’s chief of operations and its music and accounting administrator. He organized concerts and tours; managed grants, sponsorships, and projects; negotiated contracts and agreements; and hired featured soloists for concerts. For the last two and a half years of his tenure, he worked alongside music director Yannick Nézet-Séguin, the young hotshot conductor who recently was named music director of the legendary Philadelphia Orchestra.

In 2002 Marquis left to join Jeunesses Musicales du Canada, that country’s arm of an international organization headquartered in Belgium devoted to furthering classical music education for children and promoting the careers of promising young musicians. Marquis was general director, running both the artistic and financial sides of an organization that, by his tenure’s end, was giving more than 800 concerts a year.

“Jacques conducted himself very well in all spheres,” said Joseph Rouleau, the long-serving president of JMC and a renowned operatic bass singer whose voice is still rich and expansive at the age of 83. “He can make tough decisions when they’re needed, but he does it without hurting people, without being cruel.”

Jeunesses Musicales was the driving force  behind  the  restarting  of the Montreal International Music Competition in 2002, a competition that had been shuttered in 1991. Bringing the MIMC back from the dead had been in the works long before Marquis arrived, but he took over the general director’s responsibilities there as well and retained them as the competition became independent from Jeunesses Musicales. Unlike the Cliburn, the MIMC runs every year, rotating among voice, violin, and piano competitions on a three-year cycle. (The Queen Elisabeth Music Competition in Brussels has a similar format.)

The American pianist Spencer Myer reached the finals of the 2004 MIMC before competing in the 2009 Van Cliburn Competition.

“What I saw in Jacques Marquis’ leadership was … an emphasis on artistry, integrity, and serving the music and musicians,” said Myer. “He made every effort to place importance on the non-spectacular elements [of the competition]: reasonable and artistic repertoire requirements, fair judging, ample rehearsal time with the orchestra.”

Russian pianist Alexandre Moutouzkine played at the Cliburn in 2001 before winning second prize in Montreal in 2008. “I can only be very complimentary about my experience at MIMC,” said Moutouzkine. “All of us had unlimited practicing possibilities.” Both pianists agreed that Marquis was an excellent choice to lead the Cliburn.

Marquis’ organizational abilities were tested in 2005 when the Montreal Symphony Orchestra went on strike a mere 10 days before it was supposed to accompany the singers competing at MIMC. The Orchestre Métropolitain could not step in, as it was playing for the Opéra de Montréal during that time.

“Should 43 young singers, after countless hours of preparation, be sent sullenly back to 14 countries with nothing to show for their trouble?” wrote Arthur Kaptainis, the longtime classical music critic for the Montreal Gazette.

In a bind, Marquis hastily gathered a pickup orchestra. “Every time we called a musician, they weren’t sure whether to go for us, to scab MSO,” said Marquis. “I was gaining 10 musicians and losing five at the end of each day.” In the end, the orchestra was largely filled out by students from Jeunesses Musicales. The competition went off without a hitch, and Marquis found the whole experience fun.

“People were nervous,” said Marquis with a laugh. “They asked my wife, ‘How is he doing?’ She said, ‘He sleeps.’ ”

Marquis bears no ill will toward the union (“They were only playing their game, as they should”) and points out that he is still friends with musicians in the orchestra and that MSO still accompanies the Montreal competition.

Marquis recently served on the board of directors of the World Federation of International Music Competitions, for a term that expired in 2012. Before that, he had overseen the MIMC’s bid to join that organization. Glen Kwok, the American president of the WFIMC, praised Marquis’ administrative skills.

“Whoever runs the Cliburn has to deal with a lot of constituencies: the donors, the staff, the contestants, the artistic personnel, the volunteers,” he said. “Jacques’ greatest strength is his integrity, diplomacy, and his passion for his work.”