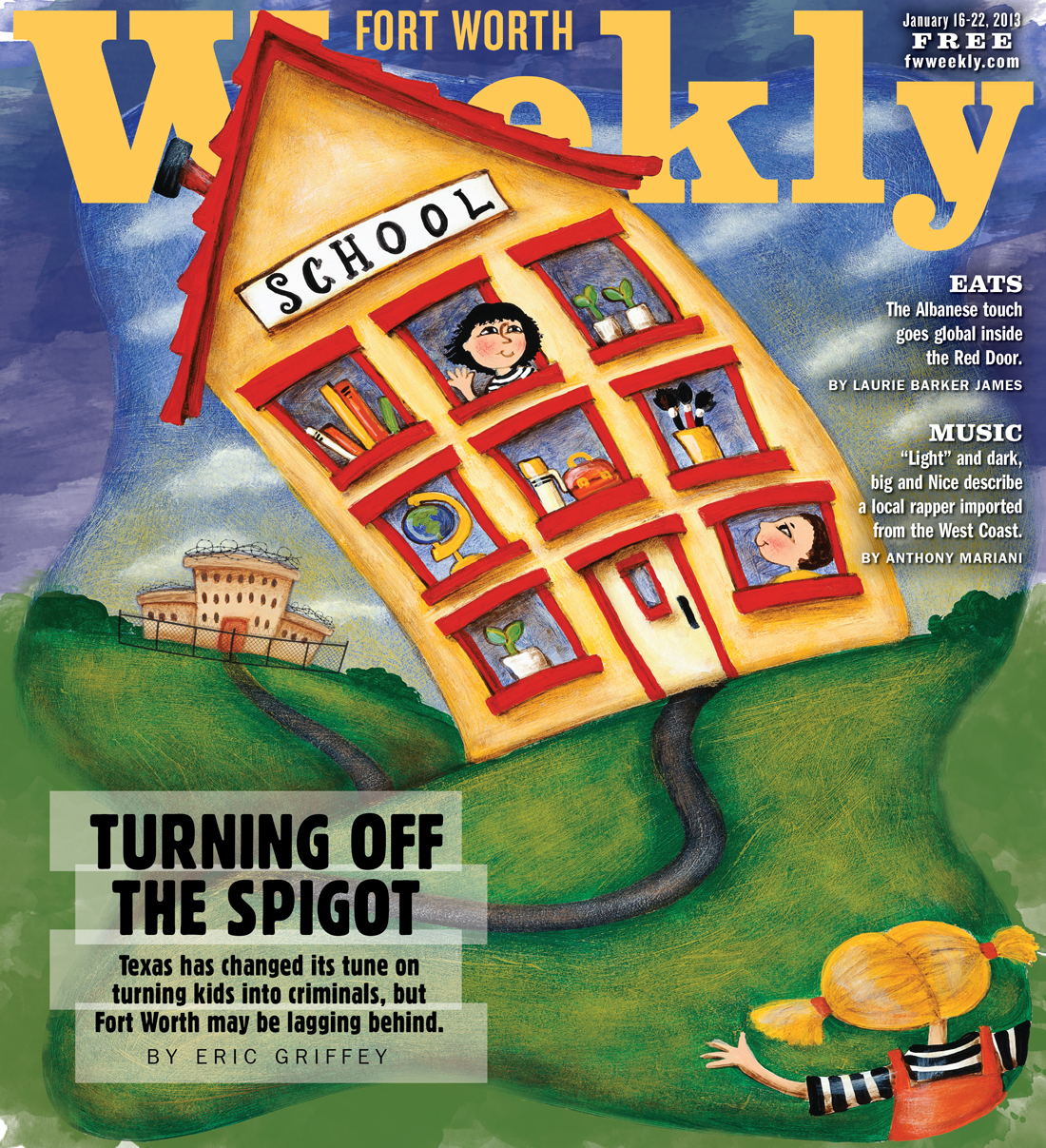 In 1995, during his State of the State address, then-Texas Gov. George W. Bush told the 74th Legislature, “We must adopt one policy for those who terrorize teachers or disrupt classrooms — zero tolerance.”

He was responding to a statewide spike  in on-campus violence that year. The legislature responded by rewriting the Texas Education Code to allow teachers and administrators essentially to create a whole new class of misdemeanors. Chapter 37 of the code created two categories: One was a vaguely worded list of offenses, such as “persistent misbehavior,” that allowed school officials to make disruptive classroom behavior into a crime; the other was a set of offenses that would automatically divert students into the newly created juvenile justice alternative education program.

The idea was to remove violence from the classrooms. But critics say that, instead, school officials removed part of a generation of students from the path toward a diploma and instead flushed them into a stream heading toward prison.

Since 1995, many activists believe, school administrators have become far too cavalier about removing students from school for disciplinary reasons. Once a child comes in contact with the criminal justice system, they say, chances greatly increase that student will remain in its grasp through adulthood. Several major studies back up that claim of a link between school discipline, school dropout rates, and incarceration.

Though few Texas districts adopted an official zero-tolerance policy, many have taken a zero-tolerance approach to enforcing their student codes of conduct — and, as a result, the vast majority of students sent to alternative schools in Texas are there at the discretion of the school district. Critics charge that racial disparities in applying the policies mean that far more minority children than whites are diverted.

Cases like that of Shaquanda Cotton have been all too common. In March 2006, Cotton, a 15-year-old African-American, was sentenced to an indeterminate time (not to extend past her 21st birthday) in the Texas Youth Commission’s juvenile detention facilities for shoving a teacher’s assistant at her high school in Paris, Texas, while trying to get to the nurse’s office.

Eddie Griffin, a child rights advocate and ex-con, said that Cotton’s case is symptomatic of the institutional racism that has plagued the Texas juvenile justice system.

“This is a typical sentence in the state of Texas for black juvenile offenders,” said Griffin. “This is why there are a disproportionate number of black juveniles inside the Texas prison system.”

In Tarrant County, according to data from a 2011 report on youth crime, a lopsided number of African-American and Hispanic students are being expelled from school and referred to the criminal justice system. That report, by the Council of State Governments Justice Center, suggests that white students are given far more second chances than minorities.

“Clearly those inside the public school system do not understand the impact [expelling students] has on our kids and our community,” said the Rev. Kyev Tatum, who is one of those calling for change. “They have an attitude of ‘I don’t want to deal with them, let’s send them out of class.’ ”

Griffin believes that the significantly larger number of minorities who are suspended and expelled for discretionary reasons (or reasons determined by school administrators) “reveals a deeper problem of racial tension in the classroom between teacher and student,” he said. “Therefore, some students are stigmatized simply because they cannot get along with one teacher. ”

The news isn’t all bad for the youth justice system. Five years ago, in the face of growing numbers of minors being sent to youth detention centers, the legislature, led by Republican State Rep. Jerry Madden and State Sen. John Whitmire, a Democrat, approved legislation that decriminalized some classroom behavior. A series of bipartisan laws enacted since then have begun to stem the flow of minors into the criminal justice system.

Texas, a state where elected officials have historically bragged about how many criminals they’ve sent up the river, is now a national model for corrections reform, as several other states have adopted laws similar to the reforms prompted by Madden and Whitmire.

What’s more, the legislation marked the beginning of a shift in strategy, if not philosophy, for Republicans, who are now focused on creating legislation to stop students from ever entering the justice system in the first place. Some observers believe the party has significantly altered its trademark “tough on crime” rallying cry, in favor of a more fiscally responsible point of view.

“The earlier you break the pipeline, the less it costs us,” said Madden, of Plano, former chairman of the House Corrections Committee, who retired from the legislature earlier this month.

The legislature in 2011 also created a council to recommend ways to address racial disparities in schools’ treatment of students.

“For the first time in the history of America, a state has said that institutional racism is a factor in producing the worst outcomes in juvenile justice, education, social welfare and mental health,” said Tatum, a member of the council.  “That’s a huge statement.”

But it’s one being felt not nearly enough in Tatum’s hometown, he and other critics say.

The Fort Worth school district has been too slow in implementing the new laws and initiatives, Griffin said.

The original goal of zero tolerance was to keep students and teachers safe. School districts across the country adopted strict policies in the wake of well-publicized incidents of school violence, most notably the 1999 Columbine High School shootings near Littleton, Colorado, in which 14 students (including the two shooters) and a teacher died.

“It’s a delegation of power by the legislature,” she sad. “Chapter 37 had standards for codes of conduct, but it didn’t specify what should be a crime. It did say, ‘Here’s how you have to describe it, and here’s what you have to say to make it a part of the code of conduct.’ ”

Chapter 37 mandates that students be referred to a disciplinary alternative education placement — DAEP, in educational jargon — for any on-campus act that could qualify as a felony, such as injuring another person; selling, giving, possessing, or being under the influence of a dangerous drug or alcohol; committing an offense that involves volatile chemicals; and public lewdness.

A district superintendent also has the power to keep a student in a DAEP for an alleged felony occurring off campus — even if prosecutors do not pursue a felony conviction, the student is found not guilty, the case is dismissed, or the student receives deferred adjudication.

The zero-tolerance policies allow administrators and district officials wide discretion to send students to DAEPs. Depending on the school district, these offenses can range from fighting and gang activity to disrupting class, using profanity, playing a prank, misusing a school parking decal, inadvertently bringing a prescription or over-the-counter drug to school, or doodling in class (when the drawing contains a weapon). A study by Texas Appleseed, a nonprofit public-interest law center, cited a case of a student who was shipped off for throwing a tennis ball down a hallway and narrowly missing another student’s head.

DAEPs have five times the dropout rate of mainstream schools, the study said.

The period from 1995 to 2006, the decade after the Chapter 37 rules were enacted, were boom years for suspensions and expulsions from Texas schools.

Marc Levin, director of the Center for Effective Justice, said that removing kids from regular classrooms has a wider range of implications than it once did.

“When kids were kicked out of school in the 1950s, there was a stay-at-home mom there making sure the kid did all of his or her work,” he said. “That’s ancient history. Most of what we hear is that police will often pick these [suspended or expelled] kids up at a convenience store. They are hanging out and getting into trouble.”