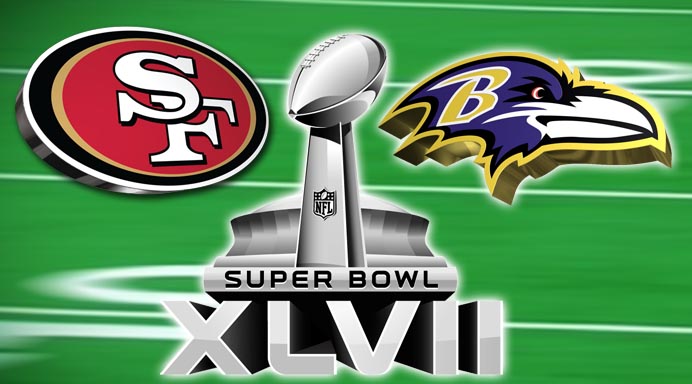 My worst NFL nightmare has come true. Two of my least favorite teams –– the Baltimore Ravens and the San Francisco 49ers –– are headed to the Super Bowl, the Ravens after effectively neutering Tom Brady and his Pats, and the Niners after being down by 17 at one point versus Atlanta. Congrats, rrrrrrggggg, to the two conference champions.

I want the Niners to lose, because I’m a Steelers fan, and if the Niners win, they will have as many Lombardi Trophies as my beloved boys in black and yellow –– saying I’m from Sixburgh, baby! has insulated me from numerous verbal assaults from Cowboys fans (haters; pure, simple, and plain) and, y’know, fans of every other team in the league since 2008, when the Stillers beat the Cardinals for that aforementioned sixth league championship. If San Fran wins and if afterward I say, “I’m from Sixburgh, baby! and maybe your favorite NFL team can win as many Super Bowls as we have” –– and I say “we” because I have prayed hard to Jesus/Buddha/Vishnu/Mohammed and have worn lots of Steelers merchandize hard to contribute to my team’s many important victories –– then some sad-sack can come back at me with, “That’s fine, but I’d rather live in San Fran-SIX-o, because the city is progressive, cool, and beautiful, and not cold, miserable, and Deliverance-esque like Shitsburgh,” and I’ll have to beat a body down, because I will. I will.

My hatred toward the flying rats? It’s easy. They’ve been the Steelers’ nemesis since they were the Cleveland Browns. Translation: Seemingly forever. Pittsburgh and Baltimore are just too close geographically and the teams too close stylistically –– our defenses are damn near tied for No. 1 overall since the Baltimorons came into the league in the late 1990s –– that that old saying that I’m just making up now, “You are what you hate,” is really relevant here. Watching the Ravens win by hook or by crook, watching them win when they clearly don’t deserve to –– hello, Cowboys game this past October! –– I can see why some people might hate the Steelers. There are much better teams, technically, in the league (New England, Atlanta, Denver), but without that winning gene, without that je ne sais quoi that the Steelers have seemingly always had and that Baltimore has recently earned, postseasons can end all too quickly (or, as with the Cowboys, not commence at all). Good teams, nay, great teams win against all odds, and that’s what the Ravens (and Steelers) have been managing to do for a good while now, the Steelers more effectively, of course.

The Pats, Packers, the new-look Denver Broncos –– these teams are stacked, from a personnel standpoint, but they clearly lack that killer instinct. How can you go through an entire NFL season destroying, simply obliterating, opponents and then get to a big game and fold? In my not-so-humble opinion, those teams’ players are just playing. Hang with me a sec. They’re just doing what they do best. They’re not driven by any meta-narrative. No sense of team history. No sense of civic pride. They could be doing what they’re doing for any team (a’hem, Peyton Manning). These paper champions lack a system, a mode of conduct that influences every decision that’s made on and off the playing field and that permeates the locker room, the stadium, the front office, and even the entire city.

Well, you say, what about Art Modell? The guy who didn’t get his way in Cleveland and, like a spoiled brat taking his bat and ball and going home, packed up his players and equipment in the middle of the night and spirited them away to the team’s current Maryland location? Indeed the recently deceased Ravens owner may have been a prick, as a businessman, but with his guidance, he helped develop the Browns/Ravens into one of the league’s elite teams by building from the inside out. Unlike Jerry Jones, the Cowboys’ GM who seemingly devotes all of his high-round draft picks to skill players, Modell formed a nucleus of hard-hitting tough guys and built around them. Jerry just wants the fastest guys. Modell wanted the toughest.

But, seriously, does anyone outside of Baltimore actually like the Ravens? I doubt it. Everywhere you go on the planet, you’re bound to see fans of the Cowboys, Steelers, Saints, Bears, and a couple of other teams (including the perennially overrated Packers). Hell, every time –– and I’m not kidding –– every time I go to the Kroger by my house I spy someone wearing Steelers gear. In my five-plus years in the neighborhood, I’ve seen dozens of Steelers fans, one New York Giants fan, one Eagles fan, and one Cardinals (!) fan. Never seen anyone wearing Ravens gear. Ever.

My main dislike for the Ravens stems from Ray Lewis, a great linebacker but a flawed personality whose shady background would be so much easier to swallow if he weren’t so goddamn A.) self-aggrandizing and B.) sanctimonious, hiding behind the bible. Look, we all make mistakes, and there’s nothing wrong with atoning for sins, but as Jesus said (and I’m not making this up), “Be careful not to do your ‘acts of righteousness’ before men, to be seen by them. If you do, you will have no reward from your Father in heaven” (Matthew 6:1).

My previously harsh stance against St. Ray was tempered last week, when I was having a few beers with friends and the subject of one Mr. Ben Roethlisberger came up. “How can you hate Ray Lewis for his crimes,” my friends asked, “but not hate Big Ben for his?” Answer: I don’t know. Maybe because my passion for and devotion to the Steelers have allowed me to “know” Ben better, to see him more as a person with flaws just like everyone else than as only a celebrity. I tried to make the argument that, well, you can’t get the death penalty for rape but was quickly shot down. Violent crime is violent crime, and, if I actually believed the death penalty wasn’t barbaric and served as a proven deterrent to crime, maybe rapists should get the death penalty. Or at least life in prison.

Like Ray, Ben wasn’t convicted of anything, and, just like St. Ray, Ben also has taken to hiding behind the bible. But Roethlisberger (two Super Bowl victories) has not enjoyed nearly a quarter of the praise currently bestowed upon Lewis (one Super Bowl victory). In fact, no one in the league has. To go even further, no one in sports has. You can’t even say “Barry Bonds” or “Roger Clemens” and the word “baseball” in the same sentence anymore, and all those greats did was take PEDs and lie about it. Two young men were stabbed to death in Ray Lewis’ vicinity, and you know what? They’re still dead. Why does Ray-Ray get the free pass?

Either way the Super Bowl turns out, I lose, but I’m pulling for the flying rats. The fact that we Ravens haters have to endure Ray Lewis’ stupid effing dance one more time is vomitous enough, and seeing him in one of his bible-verse-emblazoned undershirts hoisting that precious trophy over his head while *sigh* shedding crocodile tears will probably result in some broken furniture around ye olde Mariani household, but I’m a nurturer, not a bringer-downer, and protecting my favorite NFL team’s storied legacy is much more important to me than schadenfreude. Sweet, sweet schadenfreude.