Bullet to the Head (R) You’ll want one of those yourself if you buy a ticket to this incredibly stupid thriller starring a giant block of concrete shaped like Sylvester Stallone as a New Orleans hit man who teams up with a D.C. homicide cop (Sung Kang) to take down the business mogul who double-crossed him and the crooked cops protecting him. Based on a French graphic novel, the movie features good guys engaging in unfunny racially tinged banter while operating with total disregard for the law or common sense. Stallone isn’t the only one who looks past his sell-by date — director Walter Hill (48 Hrs., The Warriors) stages the shootouts without an ounce of vitality or creativity. This is one of Stallone’s dumbest thrillers ever, and that’s saying quite a bit. Also with Sarah Shahi, Adewale Akinnuoye-Agbaje, Jason Momoa, Jon Seda, Holt McCallany, Brian Van Holt, Weronika Rosati, and Christian Slater. (Opens Friday)

Broken City (R) This distinctly forgettable thriller stars Mark Wahlberg as an ex-cop-turned-private eye who’s hired by the mayor of New York (Russell Crowe), seemingly to investigate his unfaithful wife (Catherine Zeta-Jones) but really to set up the assassination of a political rival. Uncoupled from his twin brother Albert for the first time, director Allen Hughes has a taste for the grubby city politics in this movie’s script, but he can’t paper over the many holes in the plot. For such a handsomely appointed film with a talented cast, this comes to very little. Also with Jeffrey Wright, Barry Pepper, Alona Tal, Natalie Martinez, Michael Beach, Kyle Chandler, James Ransone, and Griffin Dunne.

Cirque du Soleil: Worlds Away (PG) On the one hand, the performances in this movie would be so much more impressive if you were seeing them live. On the other, movie tickets cost much less than any Cirque du Soleil performance. Writer-director Andrew Adamson (Shrek) provides a narrative about a girl (Erica Linz) who pursues an aerialist (Igor Zaripov), but he would have been better off abandoning the story for the circus acts. Several of the acts are set to late Beatles songs, which seems appropriate. It’s all very pretty, if unmoving. Also with Lutz Halbhubner.

Gangster Squad (PG-13) A key sequence was re-shot after the real-life Colorado movie theater massacre last summer, but the filmmakers should have re-shot much larger portions of the movie while they were at it. Josh Brolin plays an L.A. cop in 1949 who’s secretly tapped to wage guerrilla war against gangster Mickey Cohen (Sean Penn). The movie heavily whitewashes the LAPD’s sordid history of racism and storm-trooper tactics, perhaps because director Ruben Fleischer (Zombieland) is so busy trying to turn this into a retro-cool piece about cops in fedoras mowing down bad guys with tommy guns. The actors are reduced to playing cartoon versions of cops and robbers, and all the one-liners feel prefabricated. Fleischer does well with the isolated bits of slapstick here — he should stick to comedy. Also with Emma Stone, Anthony Mackie, Michael Peña, Robert Patrick, Giovanni Ribisi, Mireille Enos, and Nick Nolte.

A Haunted House (R) This movie tries to be both a parody of found-footage horror films and a comedy about relationship jitters, which would be a neat idea if the jokes were actually funny. Yeah, they’re not. Marlon Wayans co-writes the script and stars as a man who starts to experience paranormal crap after his girlfriend (Essence Atkins) moves in with him. The film’s riffs on the Paranormal Activity series, et al. aren’t inventive, but it’s the incessant, smirking jokes about gay sex, interracial sex, and emasculating women that make this movie depressing. Also with David Koechner, Dave Sheridan, Alanna Ubach, Andrew Daley, Marlene Forte, Affion Crockett, Nick Swardson, and Cedric the Entertainer.

The Impossible (PG-13) A movie that leaves very little for a critic to do. Based on the story of a real-life Spanish family, the film stars Naomi Watts and Ewan McGregor as British parents of three boys who are separated from one another in Thailand during the tsunami of 2004. Director Juan Antonio Bayona (Orphanage) does a fine job staging the disaster, and there’s a terrific performance by Tom Holland as the oldest of the boys. Elsewhere, the movie functions as a fine if unsubtle tale of survival against steep odds. Also with Samuel Joslin and Oaklee Pendergast.

Jack Reacher (PG-13) Tom Cruise stars in this surprisingly potboilerish thriller as a former military policeman who investigates when an Army sniper is accused of shooting five people dead along the Pittsburgh riverfront. Adapted from Lee Child’s novel One Shot, the movie has a couple of good car chases, some tasty stuff on the police procedural front, and a creepy turn from German filmmaker Werner Herzog as the chief bad guy. Yet writer-director Christopher McQuarrie paces this movie indifferently, and the hero (who’s supposed to be hypercompetent in Child’s novels) is curiously dull-witted at various points. It all makes for a rather average time. Also with Rosamund Pike, Richard Jenkins, David Oyelowo, Alexia Fast, and Robert Duvall.

The Last Stand (R) Arnold Schwarzenegger looks past it in this thriller as a small-town sheriff who must stop an escaped Mexican drug kingpin (Eduardo Noriega) from making it across the border. Neither the material nor the role of a former LAPD cop who has seen too much violence suits a star who comes from a less reflective generation of action heroes. This still could have been a nice thriller, but Korean director Kim Ji-woon (The Good, the Bad, the Weird) seems tentative in the action sequences, and the other characters include a highly inept set of feds and a boring romantic couple. All in all, this is just another hack thriller. Also with Forest Whitaker, Peter Stormare, Rodrigo Santoro, Jaimie Alexander, Johnny Knoxville, Luis Guzmán, Genesis Rodriguez, and Harry Dean Stanton. 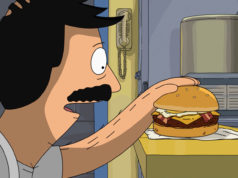 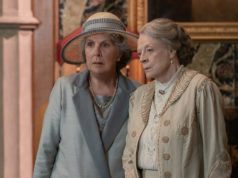