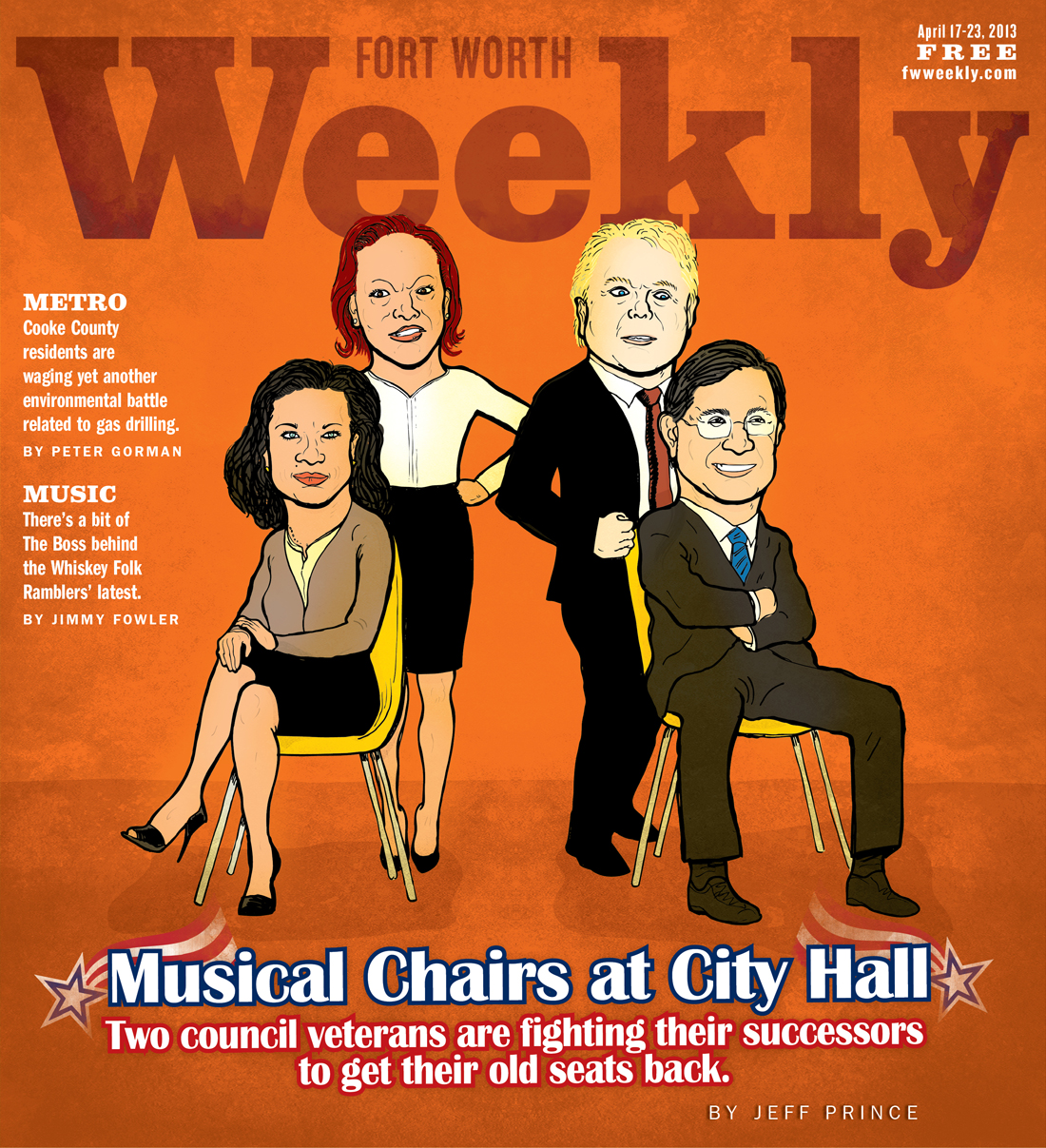 A couple of elderly women dressed in their Sunday best clutched colorful scarves over their heads and carefully crossed a slick parking lot during last week’s chilly rain. They’d just listened to candidates speak at a political forum hosted by the Fort Worth/Tarrant County Minority Leaders & Citizens Council, and the women chatted as their delicate steps carried them slowly toward their car.

Suddenly, a man wearing a suit and tie and carrying a Styrofoam to-go carton dashed past them. Water flew from the bottom of his dress shoes, and his coattails flapped behind him.

“Would you look at that man run!” one of the women exclaimed.

Sal Espino is churning his legs these days because he has a serious challenger for his city council seat.

Two familiar faces at city hall — Jim Lane and Kathleen Hicks — want their old jobs back. Lane represented District 2’s Northside area for 12 years before stepping down in 2005 and being replaced by Espino. And in District 8 on the city’s southeast side, Hicks served from 2005 until last year, when she vacated her seat to make a run for the newly created U.S. House of Representatives’ District 33. Kelly Allen Gray replaced her.

Lane and Hicks were popular during their terms, and both have name recognition, solid political resumés, and the experience that comes with having won numerous elections in the past. Both are considered friendly to city employees on pension issues — the Fort Worth Police Officers Association is helping with their campaigns. And both challengers have criticized the incumbents for not protecting their districts during last year’s redistricting process.

Espino, meanwhile, sided with the council majority in revamping the city employees’ pension system last year and cutting benefits. Gray recused herself from voting because her husband is a police officer.

Despite those differences, don’t expect any noticeable philosophical shifts on the council should either challenger be elected. All four candidates say they want the same things: street improvements, code enforcement, economic development. And they even have similar backgrounds. Lane and Espino are both self-employed attorneys. Hicks and Gray have long histories working in the nonprofit sector.

In fact, the biggest change one might notice if Lane and Hicks get their old seats back is that council meetings become livelier. Hicks was relatively demonstrative on the dais compared to the quieter Gray, and Lane is feeling frisky these days as well.

“What the city council needs is another Chuck Silcox,” Lane said, recalling the late councilman who was known for his outspoken and independent ways. “I see myself in more of that position if I’m elected. When I go back down there, I’ll be more of an outsider looking in.”

Espino, who hasn’t had a serious political challenge in eight years, has always displayed a nervous energy. His rapid-fire vocal delivery draws chuckles at city hall on occasion. But even he has kicked it up a notch in response to Lane’s challenge.

After all, this is his former mentor, a guy who did a lot for the district when he was in Espino’s spot.

“I am not criticizing Sal; I helped him get elected,” Lane said. “I put him on boards and commissions. He is a bright young lawyer. It just seems to me and a lot of other people that he’s lost his focus. He’s distracted. It happens to anybody who has been on the council for any length of time.”

Espino waited more than a week after filings opened to throw his hat in the ring back in March. He was trying to gauge whether he and his family were ready for another term, he said.

“I told everyone I was undecided because I’d been there eight years, and any time you sign up for the council it’s a full-time job,” he said. “When I was prepared to make that decision, I received the surprising news.”

Lane had beaten him to the punch and filed first. Then Lane recruited his old friend — and another Espino mentor — Louis Zapata to serve as treasurer for his campaign. Zapata became the city’s first Mexican-American city councilman in 1977 and held the position for 14 years. He’s also served as treasurer on most of Lane’s political campaigns over the years.

Rather than shrink away, a surprised Espino got fired up. He’s never been afraid of putting knuckles to wood in door-to-door campaigning, and Northside neighborhoods are sprouting Espino campaign signs like wildflowers.

Lane worried that he had put Zapata in an uncomfortable position.

“When Sal announced, I called Louis and said, ‘If you want out of this commitment with me, I understand, because I don’t want to put you in the middle of it,’ ” Lane recalled.

Zapata stuck with his commitment, even though he’s friends and allies with both candidates. This can create surreal scenarios, in which the campaign treasurer for Lane sounds as if he’s endorsing Espino.

“Sal has been pretty much doing what he needs to do,” Zapata said. “He’s a hard campaigner. It’s not going to be an easy campaign to win.”

Is it simply time for a change?

“I hate that word because when I got put out, that’s the word they used — ‘It’s time for change.’ There’s got to be some reason for doing it other than that,” he said.

Only when discussing redistricting does Zapata express disappointment with Espino.

Districts are required to have similar numbers of voters. Every 10 years politicians must decide whether populations have changed enough to merit drawing new district boundaries, which occurred last summer in Fort Worth. The debates on moving neighborhoods from one district to another can get hot.

The population in District 2 has been booming. It’s now home to about 150,000 residents, whereas the council needed to even out the districts at about 90,000 residents each.

When the dust settled, District 2, the only council district that has ever elected a Latino, remained mostly Hispanic but lost Texas Motor Speedway and portions of the income-generating, power-leveraging areas of the Alliance Corridor, as well as the politically savvy Oakhurst and Riverside neighborhoods.

“I don’t like it worth a damn the way that thing got moved around,” Zapata said. “It might have weakened District 2 a little bit.”

“You’ve got some money people there who can help promote and push things,” Zapata said. “It takes a push from the money folks to get things done. And most of those are up in the Alliance Corridor. I figured Sal would handle it.”

Espino characterized the redistricting criticism as a “red herring.”

“It’s simple math,” Espino said. Because of population growth, “There is no way to draw a map to keep those [lost areas] and still comply with the Voting Rights Act.”

Much of the growth has been in areas north of Loop 820 that aren’t predominantly Hispanic. In order to follow the Voting Rights Act, the council had to make sure it didn’t dilute the district’s minority voting strength and make it harder for Hispanic candidates to get elected. Some of the Anglo neighborhoods had to go to other districts.

The district held onto lucrative commercial spots such as the Stockyards, Meacham Airport, and the Trinity River Vision. And it gained the jobs that came along with inheriting Tarrant County College’s northwest campus and the U.S. Bureau of Engraving and Printing plant.

“This idea that losing Alliance and the Speedway means you lose leverage is absurd,” Espino said. “We have a lot of stroke. There are a lot of jobs.”

Lane isn’t buying it. He too participated in redistricting during his time on the council.

“I would not have voted for a redistricting plan that took Alliance and the Speedway out of District 2,” he said. “That came up once before with redistricting when I was on the council, trying to make this district not as large, maybe not as ethnically diverse. I said no. It takes somebody a little forceful and a little aggressive to deal with parts of Fort Worth. If there is a difference between me and Sal … I will tell you what I think, and I’m not afraid of you disagreeing with me.”

Espino views the current council as a finely tuned machine that is doing a good job in handling the city’s business.

“Do we want to keep moving forward with a positive, diverse city council, or do we go in a different direction?” he said.

Former city councilman Clyde Picht thinks the district will go in a different direction if Lane is elected. Picht clashed with Lane during their years together on the council. Some of Lane’s pet projects, including The Herd, the Texas Motor Speedway, and the Mercado development on North Main Street, met with staunch resistance from the fiscally conservative Picht.

But Picht predicts a Lane victory.

“Jim Lane was popular in that district,” he said. “I’ve heard Sal Espino referred to somewhat negatively … and I got the impression he’s not all that popular. Jim got more done on the North Side than Sal has — notable, big-dollar stuff.”

Then again, some of that big-dollar stuff fell back down on top of taxpayers. The Mercado turned into a 58,000-square-foot, three-story fiasco after Lane pushed for it early in his tenure. The original developer took out low-interest, city-backed loans to create a grand marketplace on city-owned property in the middle of an otherwise faded neighborhood. But the developer ran out of money and walked away from the unfinished project.

The city finished the building in 2005 and sold it at a loss of more than $2 million the following year. Then the building sat empty. The envisioned Mexican marketplace never ignited. United Way of Tarrant County eventually rented the second floor, but the bottom floor is still sparsely leased and hasn’t yet attracted an anchor tenant or a planned restaurant.