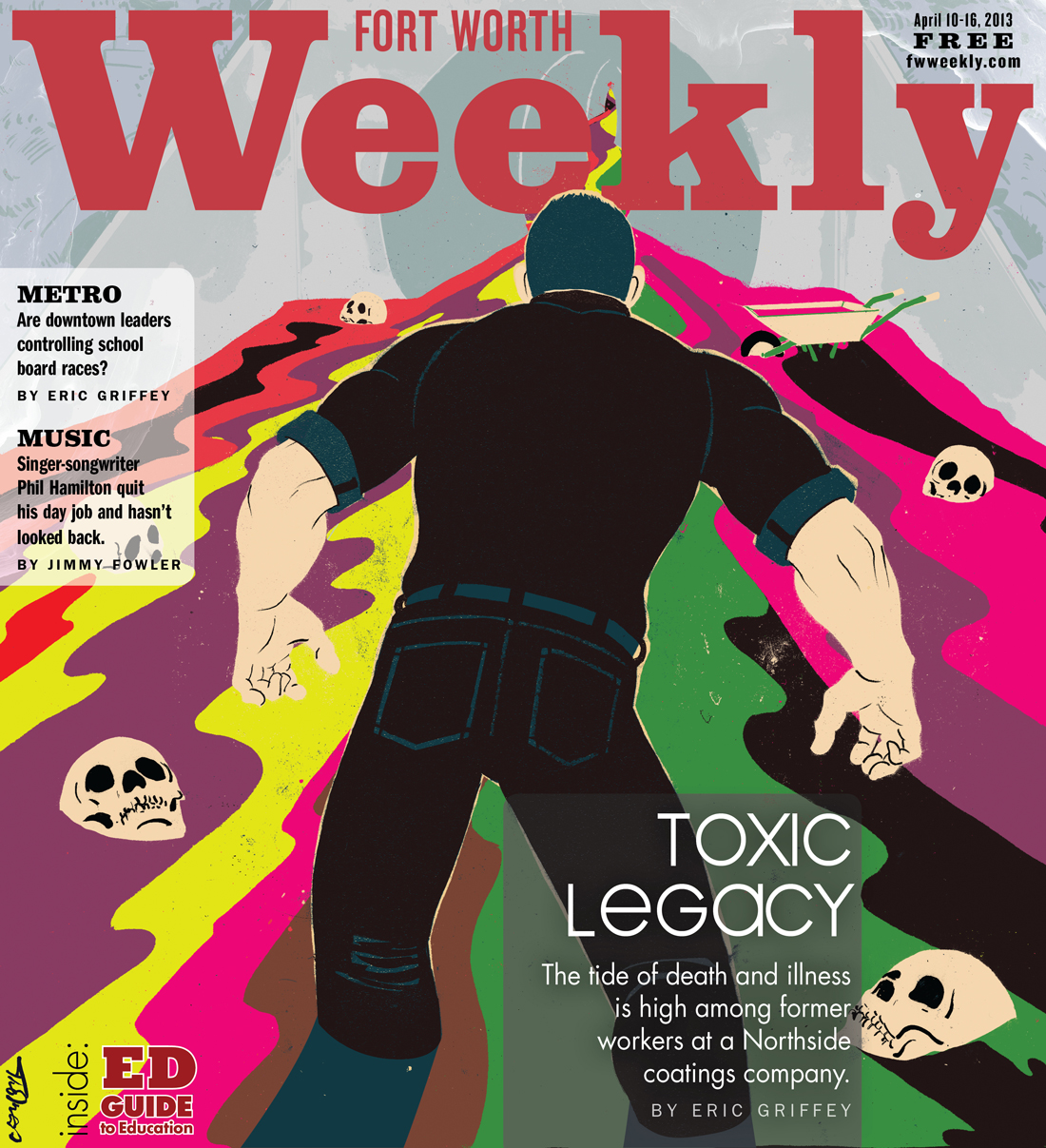 Wayne Morris was as dedicated an employee as a company could want.

For 13 years, he worked as a maintenance man for a small business called Southern Anodizing, which was eventually bought by Technicoat, a metal coating company based in Fort Worth. The company applied chemical coatings on everything from missiles to waffle makers.

Morris’ job involved crawling around in dangerous chemicals, often dumping the hazardous material into underground pits and sometimes down the storm drains when the pits were full and his supervisors wanted to cut corners.

As his three sons came of age, Morris got jobs for them at the company. As teenagers, the boys were asked to perform the same tasks as their father. Robert, the youngest of the three, said he routinely waded in foul-smelling chemicals with no protective gear or safety training.

“We didn’t have any aprons, any face masks, gloves, nothing,” he said. “We didn’t do things as safe as we could. We were just told to get the job done.”

From the 1970s through the early ’90s, the years when the Morris family members worked at the Fort Worth coating factory, environmental and safety regulations were not enforced as strictly in this country as they are now. Still, according to language in the Occupational Safety & Health Act of 1970, Technicoat’s practices violated federal safety standards.

Wayne Morris died in 2001 after a long, painful fight against stomach cancer. Now two of his sons are dealing with serious medical problems that they believe are related to their time at Technicoat. And they aren’t the only ones.

The company’s old employee roster reads like an oncologist’s former patient list. An alarming number of Technicoat staffers have passed away from cancer, heart disease, or illnesses that are linked to chemical exposure. The two Morris brothers, who now live in Arkansas, fear they may suffer the same fate as their father. Robert worked at Technicoat for five years, and Gary for six. (A third brother, Joe, worked there for a shorter time and has had much less severe medical problems.)

A recent toxicology examination revealed that Robert, now 54, has dangerously high amounts of barium in his blood. That’s one of the carcinogenic chemicals that Technicoat used in its coating for missile launchers.

He also has high levels of trichlorethylene, another chemical used at the plant. It causes blood vessels to constrict and leads to kidney and liver damage.

“According to my doctor, I’ve got holes in my kidney and liver,” he said.

Robert’s doctor at the University of Texas Southwestern Medical Center told him that his current ailments were most likely caused by his contact with the toxic chemicals used at Technicoat.

His older brother Gary, who worked at the plant from age 14 to 20, lives on Social Security disability payments and hasn’t been able to work in years. He said his medical problems have sapped him of his strength: His lungs are scarred, and he can’t stand for long periods because the peripheral neuropathy has weakened him. He said a doctor told him the scarring could have been caused by the chemicals he used to work with.

“It’s hard to describe the pain, other than it’s getting to be unbearable,” Gary said. “I used to be able to grab and hold onto stuff, and now I can’t. And I can’t stand very long.”

The chemicals that now course through the blood of the Morris brothers are among the same ones that they and their father routinely dumped into the ground beneath the plant’s location, just north of downtown near the corner of Calhoun and 6th streets, and into the Trinity River.

“When the pits were full, our supervisor told us to dump the waste into storm drains,” said Robert.

Technicoat moved in 1991 and is now located in Bryson, northwest of Fort Worth. It has merged with another company, Aero-Marine Engineering.

The longtime owner of the plant, Felton Havins, sold the Calhoun Street property to the city in 2001 and has since died. Before selling the two-acre plot, he was fined $158,880 by the Water Commission, a predecessor of the Texas Commission on Environmental Quality, and was forced to begin an ongoing cleanup of the land.

For the city and the Tarrant Regional Water District, the Technicoat site has been a major headache. The city spent more than $3 million to remove the underground tanks and pits that held the poisonous chemicals, along with surrounding soil. TCEQ demanded the water wells be capped. A rubber membrane was placed over the entire plot, and it was paved over.

The land is now a part of the parking lot for LaGrave Field. By city ordinance and TCEQ order, the area can never be built on.

The water district, meanwhile, is planning to eventually resell the surrounding land for luxury apartments, retail, and restaurants as a part of the Trinity River Vision and is responsible for frequently testing the water quality in the adjacent section of the Trinity River and nearby water wells. Environmental Director Woody Frossard said that the site’s poisonous past no longer poses a threat to the public.

“There could well be some truth to [Morris’] claim,” he said, “but the data doesn’t demonstrate that level of contamination anymore. It doesn’t exist today.”