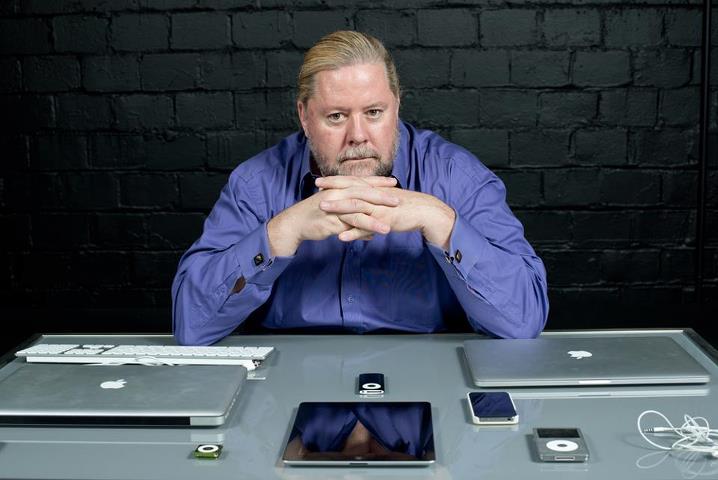 There’s no doubt that The Agony and the Ecstasy of Steve Jobs, playwright Mike Daisey’s theatrical monologue currently staged by Amphibian Productions through May 12, contains important information for so-called First World consumers of Apple tech products. Starring actor-writer Steven Young (pictured left) as Daisey and directed by Jaime Castaneda, the 85-minute piece recounts a bit of its author’s personal history as a computer geek combined with colorful tales from the late Jobs’s now-legendary corporate career. But it’s Daisey’s bucket-of-cold-water visit to the sprawling Chinese factory where iPods and iPads are made by hand under grueling labor conditions that has rightfully attracted the most attention to this one-man show. Daisey saw and, through an interpreter, briefly met with some of these workers, who toil inhumane hours for dirt pay and are often discarded by company bosses when serious injuries sustained on the job render them no longer useful as wage slaves.

Thanks to Young’s lively, brainy, but down-to-earth performance, Amphibian’s Agony and the Ecstasy delivers its expose-style details without feeling pedantic, heavy-handed, or self-righteous. Unfortunately, the problem lies in the nuts-and-bolts structure of the monologue itself –– rather, the fact that the script has no structure at all. The most personal, casual show-length monologues should still have some kind of narrative shape, even if only thematic and artificial, that will surprise us with parallels between apparently disparate ideas and events. Daisey seems to have done little reflection on the connections between his experiences as a technology consumer; Jobs’s unorthodox (some say merciless) business philosophies; and the ongoing tragedy of Third World citizens being exploited to satisfy Western capitalist appetites. As a result, The Agony and the Ecstasy of Steve Jobs feels disjointed and underdeveloped, more like a rough draft for a Harpers cover essay read aloud than a full-fledged theatrical exercise.

The show’s revelations about human rights abuses for the sake of Apple profits can’t be repeated often enough. I just wish Daisey had summoned the artistic discipline to render them as something more layered than gonzo muckraking, worthy though such endeavors are.