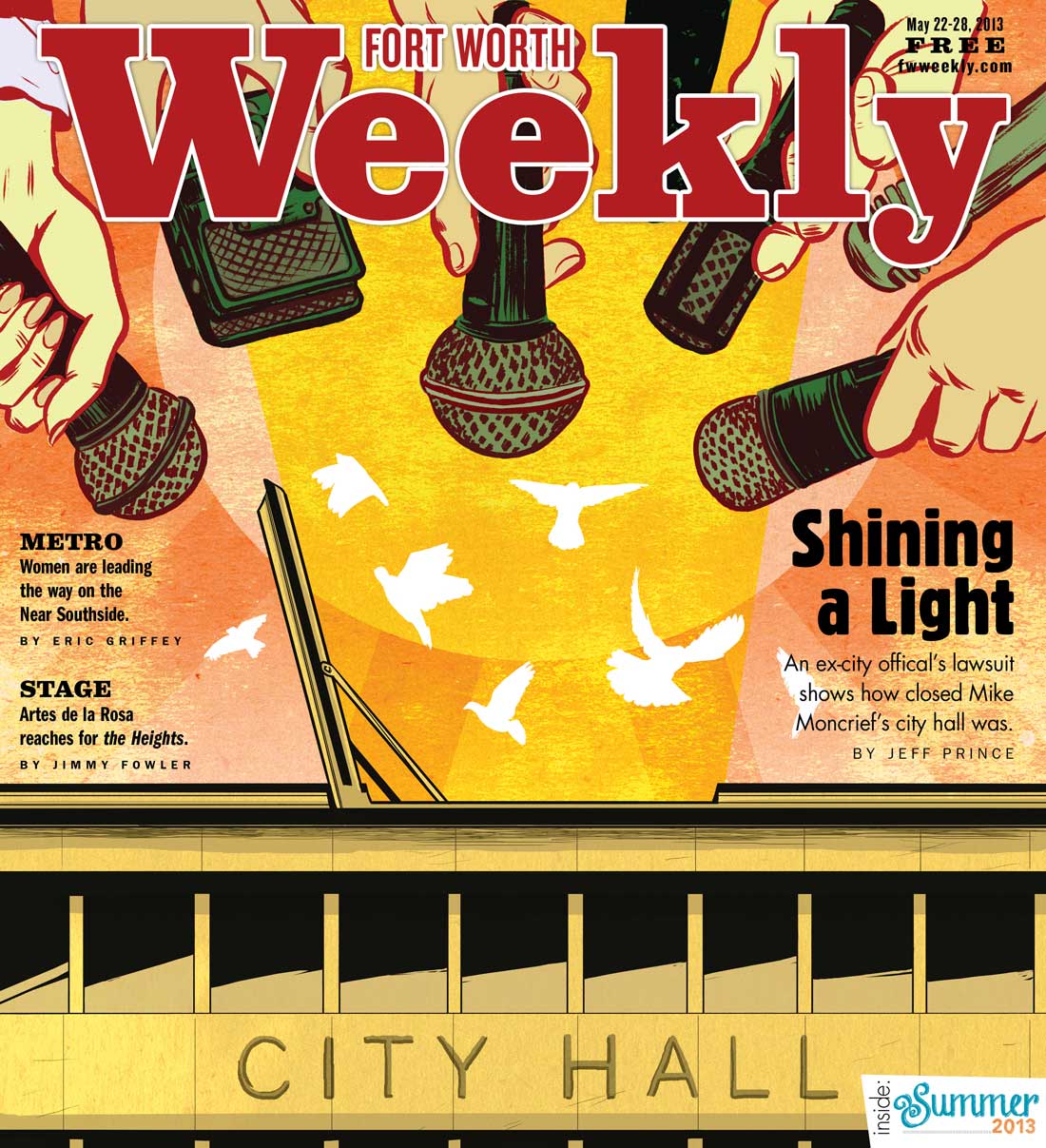 The Fort Worth City Council settled a lawsuit in April for $99,000 plus $1,125 in mediation costs. The decision served as a six-figure reminder of the not-so-distant reign of former Mayor Mike Moncrief, who ignored the city charter when it suited him, refused reporters’ requests for interviews, and tamped down on open government. As the leader shunned scrutiny, the troops followed suit. His long shadow is just now fading two years after his retirement.

Moncrief had a winning smile when he needed it. He’s tall and some might say handsome. And he could turn on the shmoozy charm.

“He did the LBJ treatment,” a city official said, referring to the good-old-boy lobbying techniques deployed by former president Lyndon Baines Johnson. “He would do the high-five, the ‘I need you,’ and it was very effective.”

Moncrief is also benevolent when he feels like it. He and his wife, Rosie, have donated millions to social causes over the years. And Moncrief led a strong push to help the homeless in Fort Worth with the Directions Home program.

But he’s not a man to get crossways with. Just ask his Uncle Tex, whom Moncrief sued years ago over money tussles. Ornery oilman Tex dubbed his nephew an “ingrate” who “never worked a day in his life outside of being a county judge and a politician,” a 1998 article in The New York Times said.

Jacobs had made an enemy of the mayor and would eventually be demoted, laid off, and — she alleged — blackballed. Last month’s settlement was no financial windfall, particularly after attorney fees were subtracted. It served as an inglorious finale to her 12-year career with the city.

“The release I signed with the city will not allow me to discuss the circumstances of my claims or settlement,” Jacobs wrote in an e-mail. She declined to discuss her lawsuit on or off the record, but the lawsuit paints a clear picture.

Other current and former city employees were also hesitant to discuss the case or the chilling effect Moncrief had on transparency. Former Assistant City Manager Joe Paniagua, now an adjunct professor at Texas Wesleyan University, recalled Jacobs as a dedicated city employee.

“She knew her stuff on the communications side,” he said. “That was her forte. I never had a problem with her.”

Beyond that, he clammed up, even though he is under no legal obligation to remain quiet.

“I’d rather sit on the sidelines on this one,” he said.

Moncrief enjoyed recognition and power as judge of the Tarrant County Commissioners Court and then state representative and state senator. He unleashed that clout quickly after being elected mayor in 2003.

Early discussions about natural gas drilling inside Fort Worth city limits occurred at the tail end of Kenneth Barr’s tenure as mayor. But Barr stepped aside and made way for the oil-and-gas wealthy Moncrief, who gladly kicked open the door for urban drillers.

Politicians and city employees who got along well with Moncrief don’t want to lose his support. And many of those who have raised eyebrows at his methods still don’t want to speak against him on record.

Moncrief’s selective concealment of inconvenient facts and his willingness to bully, aided by a complicit city staff, helped quash dissension and turn Fort Worth into a driller’s playground. Drillers were allowed to vote on influential task forces designed to oversee the industry. He pushed through industry-friendly ordinances long before impact studies were done.

During city council meetings, he would sometimes peer over the top of his glasses and berate people who had sat through entire meetings just for their chance to speak for three minutes at the end.

When the city’s Ethics Commission showed a bit of backbone over the question of drilling industry reps serving on those oversight bodies, he got rid of independent-minded members and replaced them with friendlier faces — and he didn’t bother to follow the city charter’s direction on how to do that.

City insiders say Moncrief wanted no lightning rods, nobody speaking out of turn, nothing left to chance. He wanted his staff, the city council, and employees in all departments to “stay on message,” as one former employee put it –– the message being Moncrief’s vision of a drilling-friendly city that catered to downtown interests and tolerated little opposition.

In other words, he became a “heavy-handed control freak,” said one local reporter who asked for anonymity.

Others besides Jacobs felt that heavy hand. Kathleen Hicks’ unwillingness to toe Moncrief’s line preceded her ouster as mayor pro tem in 2009.

“Mike Moncrief’s Achilles heel, his fatal flaw, was he didn’t believe the preamble of the state Public Information Act, that the government doesn’t own the records, the people do,” Lieber said. “The government is just a custodian of the records.”

Along the way, Moncrief decided he wanted his thumb more directly on the city’s communications program, even though the department reported to the city manager.

Fort Worth’s council-manager form of government is designed to let the city council make policy, set the budget, and oversee the general administration. All employees except the city manager, city attorney, city auditor, and municipal court judges are hired by and answer to the manager or to lower-level city officials –– not to the mayor. As the city’s website defines it, the city manager’s office exists “to keep the city running, regardless of who wins an election.”

Moncrief wanted a communication officer to report directly to him and council members. One was hired in 2005 but reported to the head of communications, not to the mayor and council, ensuring that personal political agendas were not promoted.

Jacobs still saw this as a potential ethical conflict. The city’s public information officers are paid with taxpayer money to provide information to residents, reporters, and others. According to court documents, Jacobs worried that an officer reporting directly to elected officials would be required to write political speeches, help on campaigns, and feel unduly influenced to spin information.

She paid for that concern with her career.