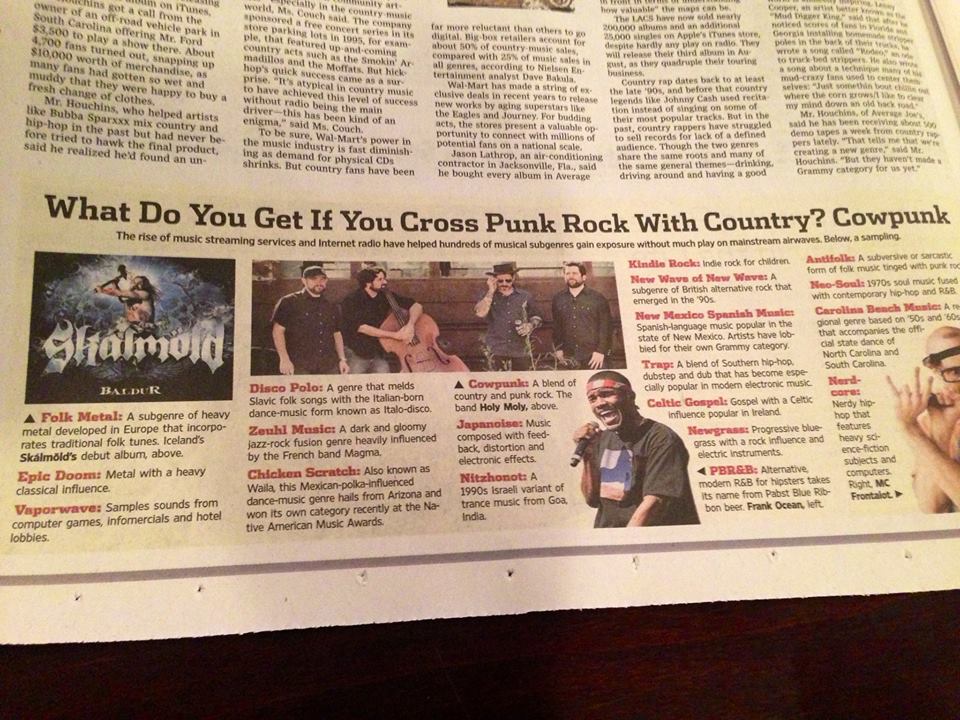 Lots to get to, but first I’d like to apologize for my/HearSay’s grossly insensitive column last week (“Panic Volcanic: Freak Fuzz”). I’m sorry for implying that female vocalists in hard rock and/or metal bands somehow don’t belong. Of course they do. It’s been proven by millions of women all over the globe (Pussy Galore, Boris, Jucifer) and even by some in our backyard (Deaf Angel). Though I don’t know for sure, I’m pretty positive that women put up with a bunch of shit every minute of every day from a culture that simultaneously demonizes them as b-words and “hoes” while holding them up as bikini- or lingerie-clad pieces of brainless, soulless meat –– my female readers and women everywhere especially don’t need to be treated as lesser than by an assholic mama’s boy like me in the only real source of alternative news in this county. It won’t happen again.

“What Do You Get When You Cross Punk with Country? Cowpunk.” That’s the headline of a story in Friday’s Wall Street Journal, right above a deckline –– part of which reads, “The rise of music streaming services and internet radio have helped hundreds of musical subgenres gain exposure without much play on mainstream airwaves” –– and also above a publicity photo of Fort Worth’s Holy Moly.

“It came out of left field,” said Holy Moly co-songwriter and guitarist Danny Weaver. “They e-mailed us earlier in this week about doing an article on newer genres of bands.”

Holy Moly represents “cowpunk” (duh!), a term that Weaver said existed before he adopted it for his raucous outfit.

Holy Moly is currently laying down tracks for a follow-up to last year’s Grasshopper Cowpunk with producer Will Hunt at his Spaceway Studios downtown. Weaver expects a late-November/early-December release.

Lastly, we received thousands upon thousands of votes in our 2013 Music Awards, and we’ve counted them all.

We have our winners.

We will announce them tomorrow (Sunday) at The Panthys, an awards presentation a la The Grammys but with a Panther City twist. Saxman Jeff Dazey and drummer extraordinaire Matt Mabe (Quaker City Night Hawks) are organizing a celebratory, jam-tastic after-party starting at 7:30-ish at Queen City Music Hall (425 Commerce St., downtown). Come join us. It’s free, and it’ll be fun.