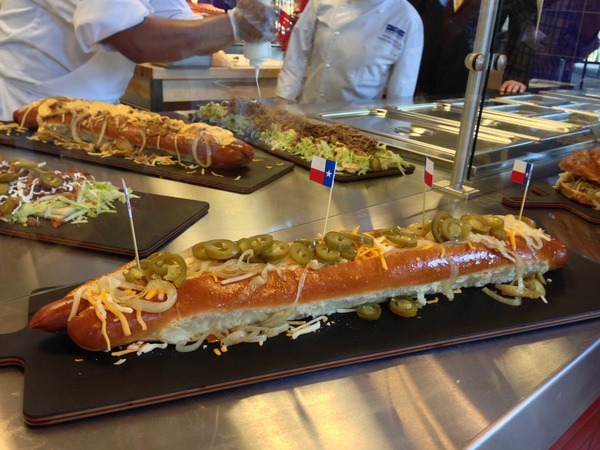 I thought any baseball fan who could afford those pricey tickets at Rangers Ballpark would want fancy noshes from the concession stand. You know, something both decadent and preposterously foodie –– say, nachos made with white truffle oil-infused Brazilian corn chips and artisanal horseradish port salut cheese sauce. This kind of snack works well with the 24-carat gold that stadium seats are presumably made of, based on admission price.

Instead, in honor of National Hot Dog Day, Rangers officials today introduced The Taco Dog. Nolan Ryan has crammed his much-sampled wiener inside a taco shell; topped it with taco meat, sour cream, jalapenos, and shredded cheese; and encased the whole thing in a toasted sausage roll.

This doesn’t sound like a meal fit for a North Texas high roller shmoozing Chinese business clients with a day at the ballpark. It sounds like something my college housemate John would’ve improvised at 3am to soak up the Old Grandad and skunk weed he’d been consuming for eight hours straight. At best, it warrants several emergency Beano kiosks placed around the stadium. At worst, it’s a hint from the Baseball Gods that, really, you could make your own Taco Dog at home for a lot cheaper. Sort of like the way you could watch a Rangers game.