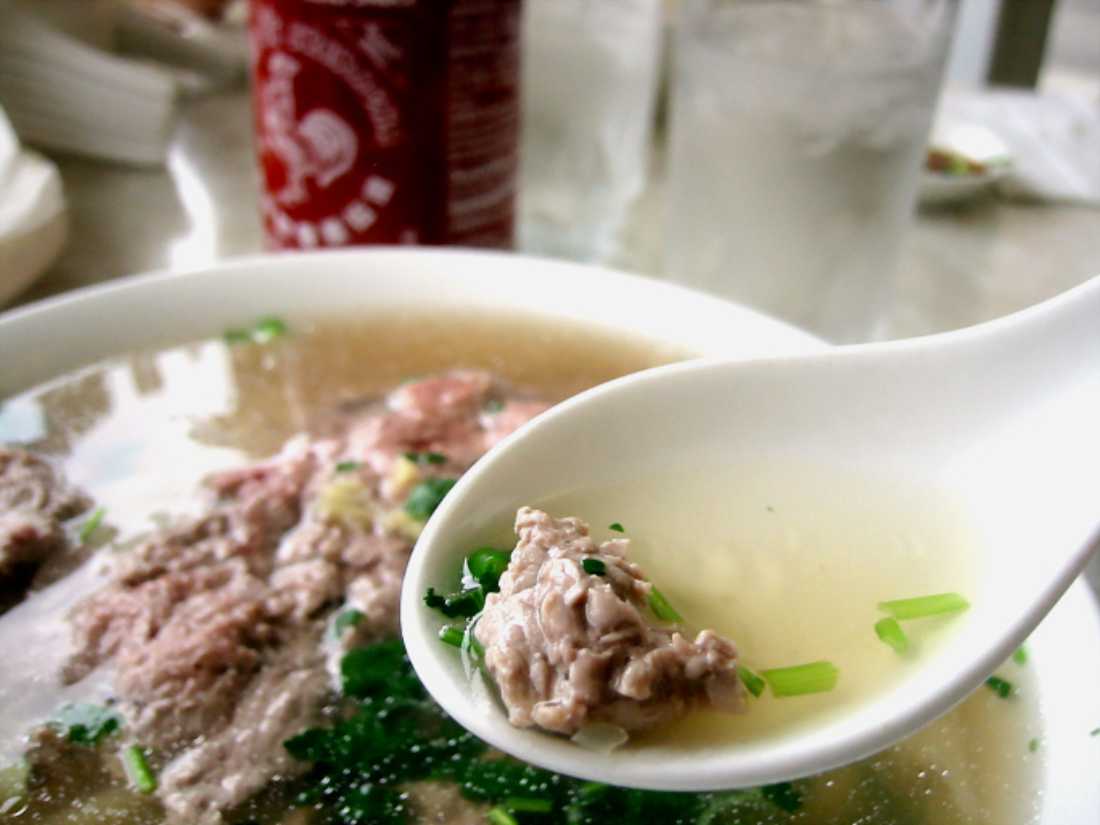 A friend of mine made the outrageous assertion that all pho — the popular Vietnamese meat soup — pretty much tastes the same. That’s a bit like saying all hamburgers are created equal or if you’ve had one steak you’ve had them all. I needed to set my wrong-headed buddy straight. After giving him some time to wrap his head around the idea of eating soup with chopsticks, we headed to the area of Tarrant County where the pho flows like wine: Haltom City.

Pho Nam (4045 E. Belknap St., Ste. 1) is an old favorite. The place is set in a strip mall, like most Asian restaurants in the HC, but inside it feels like a bustling restaurant set in a larger city’s Little ’Nam area.

The shrimp spring rolls ($3.50) are the kind of simple, elegant starters that haunt your taste buds for weeks. The shrimp is tightly rolled, along with cilantro, sprouts, and a hint of mint and is served with a rich, buttery peanut sauce for dipping. The result is a fresh, minty amalgam that crunches with every bite.

You can get pretty much any part of a cow in your pho. The menu offers brisket, steak, flank steak, meatballs, tendon — just about every thing but the hoof. For the sake of my pho-wary pal, we opted for the more occidental-friendly brisket and flank steak soup ($6.75). The giant bowl is filled with cilantro, white and green onions, sprouts, basil, ginger, jalapeños, and rice noodles. The beef broth may be thin, but it packs a flavor wallop, with cinnamon, cloves, and star anise. The thinly sliced meats soaked up the flavor of the broth, creating a nuanced, slightly sweet flavor. My pal slurped the noodles like a pro. The beef stew ($6.55) is another must-try. Chunks of tender beef, cilantro, carrots, and onions swim in a thick, oily broth. The dish is served with fresh French bread that begs to be dipped in the stew.

Service is a little slow, and there’s a bit of a language barrier for those who don’t speak Vietnamese, but it’s a family-run business, and everything is served with care.

Our second stop was Phuong Restaurant (4045 E. Belknap St., Ste. 5), a couple of doors down. Besides the food, the best part about the joint is the maitre d’. The elderly man who greeted us was a real charmer.

I left that place savoring the banh mi ga ($2.50), a sandwich of chicken, liver sausage, cilantro, jalapeño, cucumber, pickled carrot, and pickled turnip. The liver is tossed in a salty butter sauce, which mellows out the taste a little and adds richness to the dish.

Since it was our second pho excursion, we upped the ante on exotic ingredients and opted for the rare steak, beef tendon, brisket, tripe, and beef balls ($5.99). The setup is the same as Pho Nam’s, though the broth wasn’t quite as refined. The jalapeños were particularly spicy, and I regretted dumping so many into the stew. The thinly sliced rare steak was particularly good, although it was more medium than rare. The whole point of our excursion was to sample the pho, but the de xao mang nam nut ($13.95) — goat meat, stir-fried veggies, bamboo, and mushrooms — stole the show. The goat is slathered in a thick, peppery plum sauce that had a nice sweet/hot balance.

The final stop on our tour de pho was Pho Hung (4125 E. Belknap St.), a block away. The enormous strip mall eatery is a little less authentic than the first two, and its menu casts a much wider net — though I’d hesitate to call it pan-Asian. My suddenly pho-fluent friend went for the tai, nam, gan ($6.75), round-eye steak, well-done flank, and tendon. It lacked the flair and flavor we found at the other two places, but it was decent nonetheless. I was all pho-ed out at that point and ordered the com ga xoi mo ($7.25), a Cornish game hen served with steamed vegetables, rice, and lemon grass-infused sauce. The hen was moist and delicious, and the sauce added subtle hints of lemon and mint.

My friend is now a zealous convert. These days you can find him trolling the streets of Haltom City like a pho-pium addict, asking, “Brother can you spare a chopstick?”