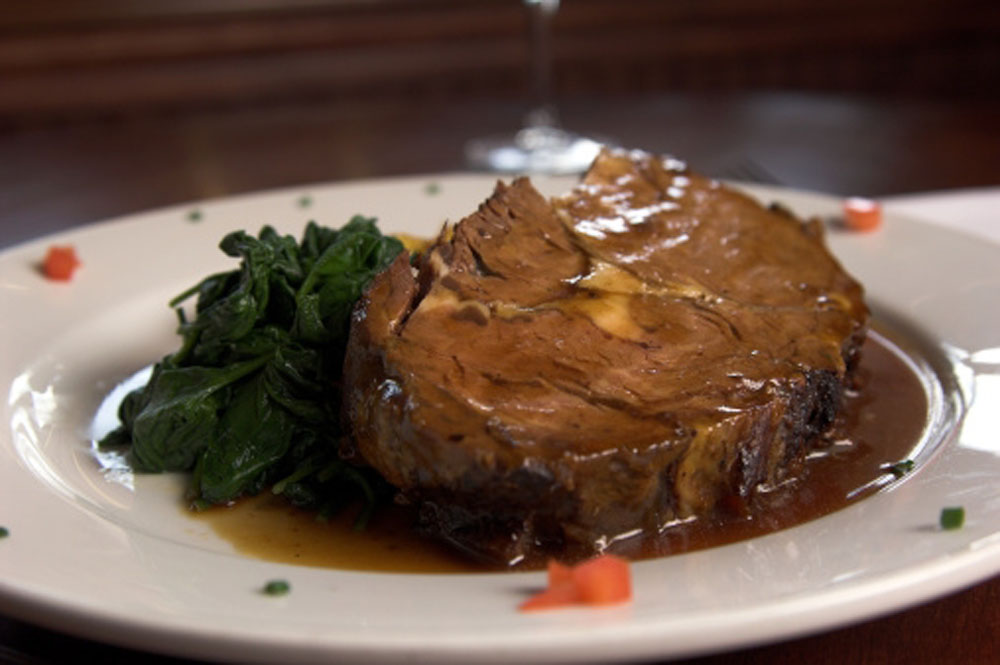 As a child of divorced parents, Chow, Baby benefited from some unhealthy parental competition growing up. Apparently, the contest for favorite parent is still raging. Last week, both Chow, Mere and Chow, Daddy took me out for dinner. Not only did I get some quality time with the folks, but I also got two pretty good meals out of the deal.

My mother had just returned from her native London, England, and wanted to wow me with her reinvigorated accent. So we met at one of her favorite haunts, Moni’s Pizza & Pasta (1703 W. Randol Mill Rd. Ste. 100). It had been years since I visited the strip- mall Italian restaurant, but not much has changed.

The walls are lined with murals of famous people, including the late James Gandolfini. The place is cozy, and the décor effectively distracts diners from the strip-mall setting. On our visit the place was about half full, and the service was a little slow, though not agonizingly so.

Either my mother has forgotten that I no longer have the metabolism of a teenager or she has no regard for my waistline. The portions at that place are enormous.

The appetizer calamari ($7.95) was nice and crisp, served with a simple, fresh marinara sauce. The artichokes oreganata ($5.95), baked artichokes stuffed with breadcrumbs, were swimming in butter, and my fork cut through them like a bundt cake.

The entrée chicken Aristocrat ($9.95) caught my attention and didn’t disappoint. The spaghetti was a picture of elegant simplicity, topped with a tender piece of chicken, eggplant, pink sauce (a mixture of marinara and Alfredo sauce), and slathered in enough cheese to put a Frenchman in a coma. It filled a plateabout the size of a hubcap.

The place has a brick oven and just lists toppings for the pizzas. We opted for a “small” ($12.95) with mushrooms, olives, green peppers, and spinach. The thin crust was crispy and the ingredients fresh. I’d go there again just for the pie.

Mom set the bar pretty high, but Dad would not be outdone. He did what fathers do: He took me out for a steak. The Keg Steakhouse & Bar (5760 SW Loop 820) is one of the least heralded steak houses in town, perhaps because its location is in the Fort Worth traffic equivalent of the Bermuda Triangle. Or maybe because it’s a chain, and the locavore movement has made it trendy to eschew such places. That being said, the dimly lit dining room was full on a recent weeknight.

The atmosphere is decidedly masculine, with large dark-leather booths and brick walls lined with torches. The place is all leather, fire, and meat — imagine Quest for Fire, but with more people wearing suits.

The Keg is not the sort of place chefs gush over. But what the menu lacks in creativity, it makes up for in quality and consistency.

The prime rib classic ($26.95), a 10-ounce cut, was served with a twice-baked potato, horseradish, and jus. The kitchen didn’t reinvent the wheel with the dish, but it didn’t have to. The steak, cooked a perfect pink medium-rare, was like buttah. Every bite brought me closer to my evolutionary forebears, though I resisted picking it up by hand and dancing naked around one of the torches.

The winner, and still champion, of the parental tug-of-war is … me. Those two know that the way to my heart is through my stomach. I mean, they raised me that way.