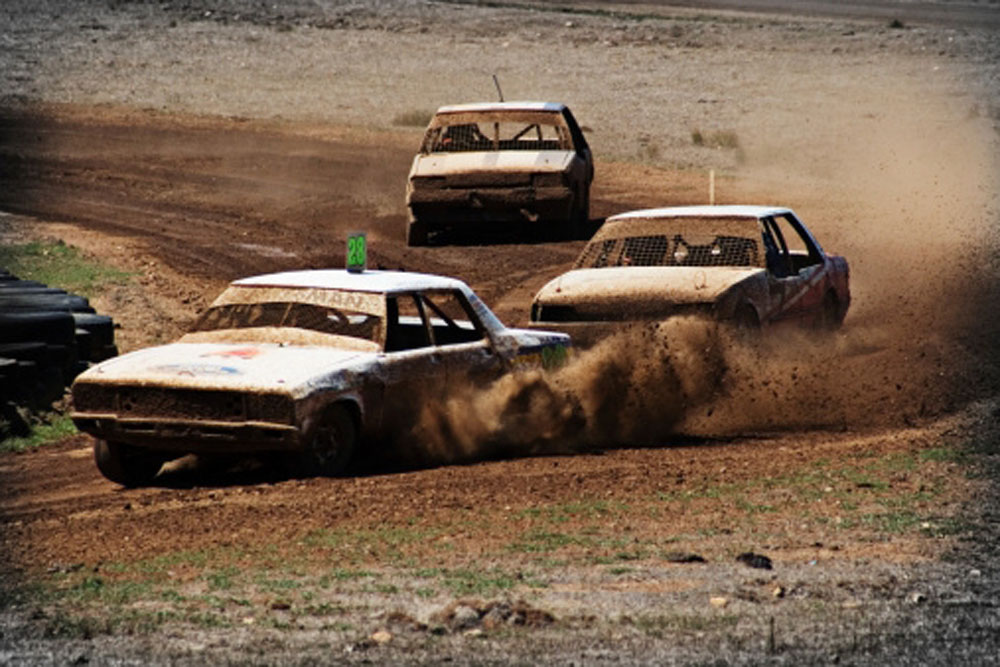 I read this Harper’s essay a while back called “Southern Culture on the Skids,” in which writer Ben Austen examines the recent decline in NASCAR’s overall popularity from its dominant spot in the American zeitgeist of a decade ago. In a sentence citing the sport’s fanbase from 10 years ago (75 MILLION!!!), he also mentions the mid-oughts explosion of stock car-related entertainment, including the pre-meth-and-botox Lindsey Lohan vehicle Herbie: Fully Loaded, Pixar’s Cars, and of course, the Will Ferrell/Sasha Baron Cohen stock car parody/silly accent blockbuster Talladega Nights: The Ballad of Ricky Bobby. I was thinking of the Harper’s piece, as well as the Will Ferrell movie, because another giant, booberiffic sports bar, named for the titular driver in the Ferrell flick, has cropped up along Loop 820, between Blue Mound Road and I-35, a fitting counterpart to Redneck Heaven east of the interstate.

That northwest chunk nestled inside the curve of loop and freeway should probably be called the “Three T Corridor” or some such, because along with businesses selling and servicing trucks and tractors, there are no fewer than three strip clubs, plus the addition of breastaurant-esque Ricky Bobby Sports Saloon — a pretty high concentration of the third T in an area not much bigger than a square mile.

Despite all that, it’s not like that part of town is Fort Worth’s answer to the Tenderloin. I don’t think there’s a Kubota dealership in San Francisco’s fabled LIVE! NUDE! neighborhood, nor does the Tenderloin contain an enormous gun store. But if you’re out to give singles to naked ladies, the Three T’s (as I’m wont to call it hereafter) is almost like an outlet mall, if the only items for sale were thongs, glitter, and bras. Well, and backhoes, but you get my meaning.

I got the lay of the land because I took the wrong exit. For the record, the Mark IV exit won’t get you to Ricky Bobby’s, though it will take you to Pinups or Buck’s. Eventually, after some accidental exploration of Blue Mound Road, I found the right strip of frontage road, parked, and snapped some photos of what appeared to be the Ricky Bobby prop car from Talladega Nights.

Once seated at the bar, I was surprised to find that the NASCAR theme was pleasantly subdued. Well, maybe not subdued, but, considering the visual blather that’s wall-to-wall in Ricky Bobby’s opposite on the east side of the freeway, it was almost tasteful. Apart from a couple of half-scale, car-shaped Bud and Miller wall-hangings, a wall made of vintage oil cans and a stock car hood, and a full-length side of Kyle Busch’s M&M-sponsored car, the usual sports bar accoutrements were noticeably absent, giving you an ample view of grey bricks and polished wood. In fact, more than NASCAR, I’d say the dominant decorative scheme was “television.” Besides the 12 sets hanging above both sides of a rectangular bar, there were another 16 flat-screens across the building, plus two of the biggest TVs I’ve ever seen hung from poles in opposite corners.

The tasteful restraint ends there, however, as the employee uniforms are akin to what servers wear when bringing you drinks in between lap dances. Still (and oddly so), Ricky Bobby and its staff don’t come off as trashy. If Redneck Heaven is too tacky for you, swing around to the other side of 35 and hang a couple of lefts — that’s all NASCAR drivers do anyway, right? — Steve Steward

Just in time for the hottest part of the summer, The Usual’s Dave “Tiki Dave” Mayer has started a tiki-themed night every Wednesday. Against a backdrop of surf rock (and perhaps the exotica of Esquivel, or the Hawaiiana of Don Ho or even Elvis?), Dave is crafting various tropical libations, including his signature Back to the Island (three rums, Campari, pineapple juice, his secret house-made mix and Fee Brothers Bitters) served in a hollowed-out pineapple, with a garnish of flaming 151. Whether or not you’re a cocktail nerd, this drink is a must-try. “If the tiki night catches on,” says Mayer, “I’ll put together a full menu for it.” You might not be getting lei’d this summer, but you can at least drink like you are, on Wednesdays at the Usual. – SS

Shoot for the Moon