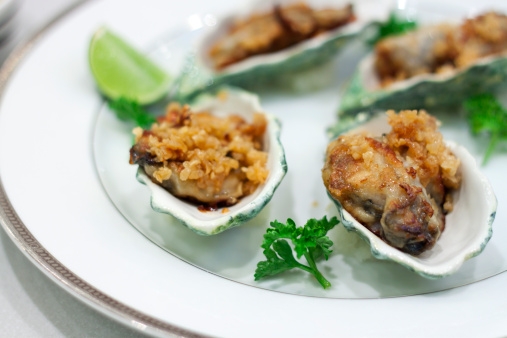 As my mother often says, I was born early and that’s the last time that ever happened. I was meeting a friend for lunch at Pacific Table (1600 S. University Dr., Ste. 601), Fort Worth’s newest seafood eatery, set in the former home of La Piazza in University Park Village. And of course I was running a half hour behind.

Luckily, my buddy waited for me patiently. I walked to our table so fast I almost missed how swanky the interior looks. The décor is upscale modern, with wood slats on the walls that make the space warm and appealing and direct the natural light from the windows. There’s a sushi/oyster bar in the back, and the kitchen is partially exposed. It’s clear when you step through the door that someone spent a lot of time and effort creating the ambiance.

After apologies and excuses (my pal has heard them all), I scanned the menu with the excitement of a kid on Christmas morning. I’ve been waiting for this place to open for a while now.

On paper, Pacific Table sounded like the answer to my prayers: a non-chain seafood restaurant where I can eat without fear of clogging my arteries or having to pay $40 for an entrée. It’s the brainchild of Chef Felipe Armenta of The Tavern Bar & Grill fame. And though I’ve had some issues with the Tavern (“Up at the Crack of Egg,” March 27, 2013), I enjoy it for the most part.

The menu is a little scattered, offering prime rib, roasted chicken, sushi, salads, sandwiches, and of course seafood. I was a little disappointed with the entrée selection. That part of the menu is small, with only four seafood entrées –– and two of them are salmon. The kitchen is going for simple and elegant, which is a fine goal. However, our food was too simple and not elegant enough.

My guest and I started with the fried oysters ($10), battered and topped with flecks of garlic and parsley and served with a grilled lemon. It was the kind of delicious starter that really showcased the oysters.

The trout almondine entrée ($18), with brown butter sauce and vegetables, was a littletoo plain-Jane. It wasn’t bad, but it had no restaurant flair. Most folks could have done it at home. The grilled trout was served skin-on, with chunks of almonds scattered on top that added a nice crunchy texture. The butter sauce overpowered the fish, however, and it didn’t help that the veggies were soaked in butter and also topped with almonds. It was a one-note dish.

The scallop salad ($16) was another decent but not inspired choice. The scallops were pan-seared and caramelized on top, served with wild greens, apples, golden raisins, and a pecan vinaigrette. The scallops were buttery and well seasoned with salt and pepper. The apple-raisin combo made the dish a little sweet. The pecan dressing could have tied the flavors together but was too bland for the job.

This place still has loads of potential, and I’ll definitely be back. The décor is cool, the service was fast and friendly, and the kitchen’s execution was flawless. This town badly needs another good, reasonably priced seafood restaurant. If the chef will just add a little excitement to the menu, I promise I’ll get there on time for my next visit. Hey — wonders never cease.