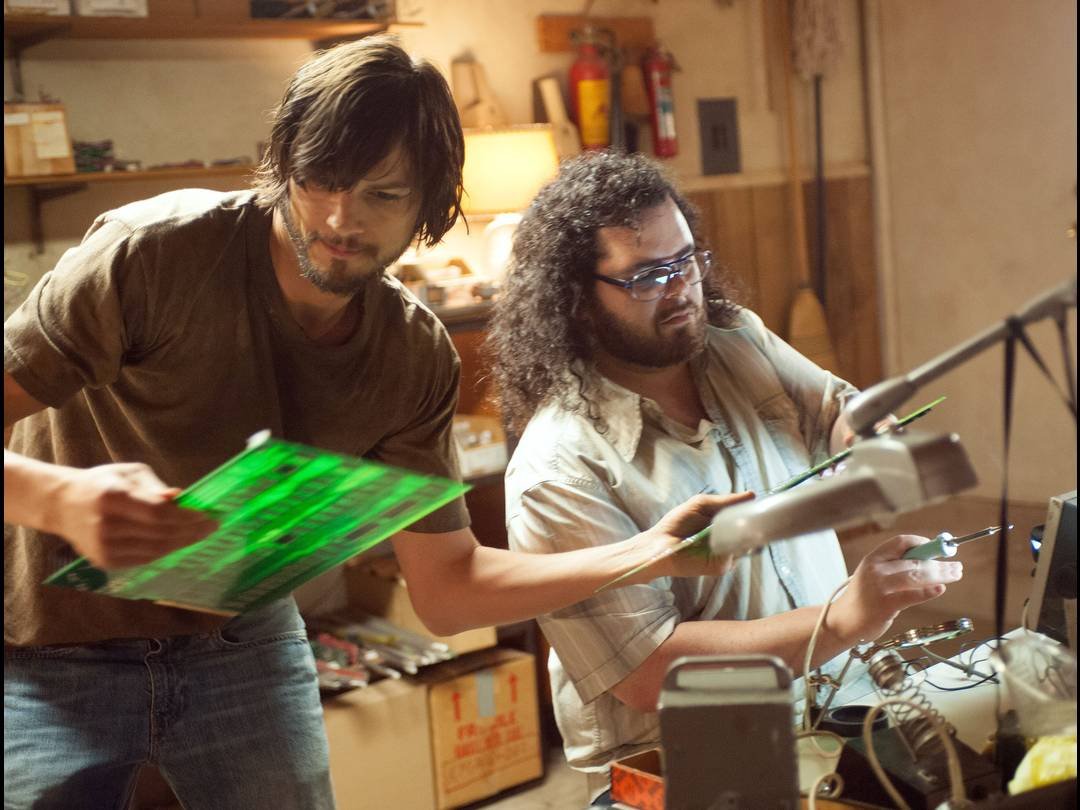 I’ve come to appreciate the beauty, power, and accessibility of Apple products, so I’m primed for a movie detailing the creative and technical vision of Steve Jobs, the man behind those infinitely useful devices. Unfortunately, watching Jobs is like being trapped in a room and yelled at by a brilliant, short-tempered, egomaniacal control freak. If you’re seeking insight into his work, you’ll have to look elsewhere.

After a prologue at Reed College in 1971, we pick up a few years later when Steve Jobs (Ashton Kutcher) has his eureka moment. A dissatisfied Atari programmer, he discovers that his buddy Steve Wozniak (Josh Gad) has figured out how to hook up a computer to a TV. Instantly, Steve recognizes that Woz’ side project paves the way to put a computer in every home.

For a while, the comic chemistry between Kutcher and Gad carries things, with Steve providing vision and salesmanship for Woz’ nuts-and-bolts genius. However, like all the other supporting characters here, Woz disappears for long stretches in the rush to canonize Steve’s entrepreneurial spirit. Basic storytelling elements are crowded out. We never find out how Steve and Woz met. There’s no background about Apple’s relationships to IBM (the computer giant that it dethroned) or Microsoft (Apple’s ally, then adversary, then ally again). When Steve lays down favorable terms for himself while negotiating with initial investor Mike Markkula (Dermot Mulroney), we’re mystified as to how this hippie tech nerd acquired such business acumen. Even more egregiously, Steve’s daughter is mentioned as a 4-year-old child whom her father refuses to see, and when next we hear of her, she’s a teenager living in his house. The movie puzzlingly leaves off at Steve’s triumphant return to Apple in 1996 after a period of exile. Why no mention of his magnificent run of world-changing products in the ’00s or his involvement with Pixar?

Instead, director Joshua Michael Stern (Swing Vote) and screenwriter Mark Whiteley subject us to the same scene over and over: Steve exhorts Apple employees to be awesome and summarily fires anybody who can’t, while the golden California sunshine casts a halo behind the great man. When Steve fails (which is seldom) or behaves like a dick (which is often), it’s because the silly, uncreative peons around him can’t see what he sees. A tearful Woz resurfaces late in the movie to call Steve out for placing products above people, but we don’t learn how Steve absorbs that. Too often the movie mistakes hectoring for innovation and courage.

The movie needed more scenes with Steve inspiring and uplifting his employees (which the real-life Jobs could definitely do), and if it were really interested in a warts-and-all portrait, it could have addressed Apple’s alarmingly casual attitude toward labor practices in its overseas factories. For all his considerable flaws, Jobs lavished care over every facet of his products. He’d undoubtedly blow up at such a slapdash biopic being made about him. Jobs aims to pay tribute to a revolutionary thinker, and yet it fails to think different.