A lot of musicians like to sneer at the idea of cover bands –– groups whose sole purpose is to pay tribute, via performance, to artists they idolize. But many (arguably most) unique musical voices were developed by emulating the performers who inspired them. Take the Fort Worth alt-folk outfit The Royal Savages. Singer, guitarist, and co-founder Addison White, 21, freely admits that his musical training came from playing in not one, but two cover bands.

“My dad has played in a band called Badfun for a long time,” said White. “They cover ’70s, ’80s, and ’90s bands. Sometimes they’d ask me to sing and play guitar when I was a teenager. They’d do four hours straight in these little local dive bars. I learned to play Tool and Alice in Chains songs.”

The Royal Savages themselves started out in 2012 as a tribute act called The Wah Wahs. They were dedicated to performing the music of two groups –– Los Angeles-based indie rockers Grouplove and English pop purveyors Alt-J. Both bands were mutual obsessions of White and Dustin Gasser, a drummer-singer-songwriter and co-founder of The Wah Wahs.

After the group changed its name to The Royal Savages and recorded an LP of original song demos, Gasser departed for another band, leaving White as the frontman and sole composer. But unlike a lot of musicians who let their sound develop organically, White had a pretty detailed vision of the kind of music he wanted The Royal Savages to make: experimental but accessibly melodic, full of mood and tempo changes yet centered on strong male-female vocal harmonies throughout the songs, not just in the choruses. White began looking for women singers and met vocalist Lauren Moore through a friend.

The results have been captured on the Savages’ first EP, released last spring on the local label Euphio Records. Tunes like “Racing Tears” and “The Sun’s Song” are epic mixtures of ’90s grunge bombast and the current big-sound folkie revival of artists like The Lumineers and The Avett Brothers (the latter are a big influence on White). And yes, White and Moore’s casual but pristine harmonies bring a wry, earthy loveliness that recalls everyone from Dolly Parton and Porter Wagoner to X’s John Doe and Exene Cervenka to, well, Christian Zucconi and Hannah Hooper from Grouplove.

“My voice is more on the grungy side, and Lauren’s is soft and delicate but also kind of jazzy,” said White. “I feel like [male-female harmonies] are taking the opposite ends of the music spectrum and bringing them together. It’s part of the [emotional] groove we wanted to establish, bringing the listener up and then dropping you down.”

The Royal Savages know that they’re a new band, but they’re also ambitious and committed to becoming the best live musicians they can be. With James Hughes on bass and Ben Coker replacing Gasser as drummer, they’ve played at every major Fort Worth club and small venue you can name and are booked solid with North Texas shows, including Dallas and Denton, through October. They’re also planning to shoot music videos for a couple of the songs on the EP and are writing material for their next long-player.

The group hopes to take their music to national audiences eventually, but  they say that one thing will remain the same: their desire to preach a “spiritual but not religious” gospel of love, creativity, and the dignity of the individual through their live shows and recordings.

“A lot of what I sing about is the idea that people are treated like numbers instead of individuals,” he said. “Governments do that all around the world to their citizens. It’s a big part of what humanity’s doing wrong. So we try to do the opposite onstage: Get people to have a good time, laugh between songs, and know that they’re valuable, that they’re loved. I’m not a religious person — it’s just how I’ve tried to live my life.” 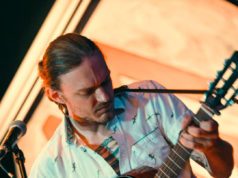