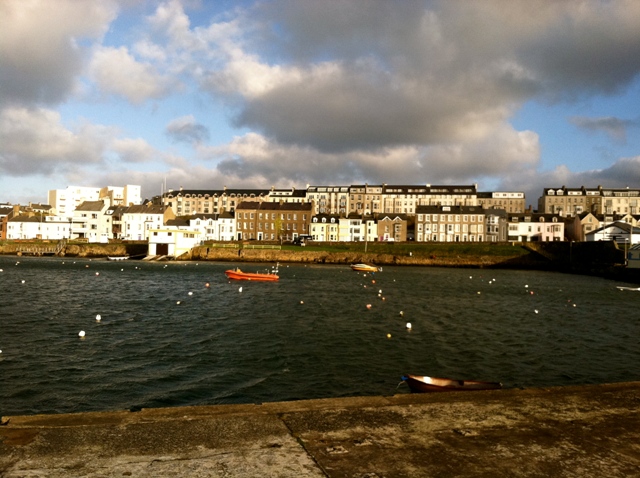 My name is Keegan McInroe, and I am a singer-songwriter from Lubbock who’s been living in Fort Worth off and on since 2001, when I began my four years of study at Texas Christian University. Over the course of my 10 years writing, performing, and recording original music, I’ve played hundreds of shows and traveled thousands of miles throughout the United States and Europe. My latest tour is taking me to New York City, London, Paris, Amsterdam, Budapest, Prague, and Barcelona, with dozens of stops in between. Whether you’re an independent musician like me, a fellow budget traveler, or simply a reader who loves a good tale from the road, Texas Troubadour Abroad –– my (mostly) weekly travelogue published here on the Weekly’s website –– will have something for you.

“Be yourself; everyone else is already taken.” –– Oscar Wilde

It has often been guessed or assumed by persons along the path of this tour –– mostly until I open my big Texas maw –– that I am from Ireland: an easy enough mistake, given my red hair and beard, and my name, all of which precede my arrival on posters and other marketing propaganda online and at the various venues I play.

A surprising number of folks have also guessed I’m Canadian. I can’t explain that one.

The Irish connection is legitimate. My granddad’s granddad on my mother’s side came over with two brothers from Ireland, as the story goes. I also have English, Scot, French, and Native American in me –– that I know of.

I am real proud of that Native American, even though I probably have about as much of it in me as my mutt dog has wolf in her.

Undoubtedly several other ethnic bloodlines swim through my veins with roots all the way back to Africa, though I haven’t personally followed them that far.

But here I am in Ireland and have been for five days or so, ever since boarding my first flight in Europe of the tour from Paris to Dublin back on Monday, and, as has been experienced multiple times since arriving, even the Irish mistake me for Irish.

Technically, I am in Northern Ireland now, and –– though some might argue otherwise –– there is a difference.

It can be a touchy subject in the North. There have been a few mild flareups in the troubles of late, though those who wish to continue the violent back-and-forths of previous generations are in the vast minority by all accounts I’ve heard.

For his perceived role in helping bring peace to Ireland in the ’90s, Bill Clinton still enjoys a great deal of popularity here –– hence the Russian doll I am staring at with the painted-on-likeness of our 42nd President, hand contemplatively on chin, nobly gazing into the distance, successively smaller likenesses of the man within.

Or so I wrongly assumed.

I opened it just now to investigate. The first descending doll enjoys the likeness of Monica Lewinsky, the following of Gennifer Flowers, the next of Hillary Clinton, and the tiny doll in the very center, of a saxophone. Brilliant.

I’m in the home of a good friend of mine whom I met during my last visit to Portrush, a charming North Ireland peninsula town just up the road from the Bushmill Irish Whiskey distillery. My view from his living room is of the Atlantic Ocean and the sandy West Strand beach.

The sun is shining bright and warm, the sky is baby-blue and riddled with enormous, slow-moving clouds, the gulls are squawking and circling, the faint shrieks of children from the nearby mini-carnival color the calm, and I just got my head straight and my belly filled after a good, long sleep following last night’s show at The Atlantic Bar and the subsequent after-party in the living room of my host.

I came to the Atlantic Bar back in December on the recommendation of a friend of a friend, an Irish folk-rocker by the name of Eamonn Dowd. On that last tour, I was invited back the night following my gig to participate in a jam being thrown there.

Last night I was invited back this evening for a repeat solo performance. This works well, as I have met some great people in Portrush, and we need at least two days and nights to stretch our legs and livers.

Eamonn is also responsible for my knowledge of the small Irish town of Mullingar, where I very indirectly travelled from yesterday –– via Dublin, then Belfast –– after laying up four days in the home of more friends from the last tour. I haven’t met Mr. Dowd in person, but I clearly owe the man a few pints.

My gig in Mullingar was originally booked in the same bar I played last tour, John Daly’s Pub, but upon arriving in Ireland, I discovered the venue had changed. Making it to Dublin after an all-nighter in Paris, I immediately went to a pub for a welcome Guinness and fish and chips, hopped on a bus to Mullingar, wandered to a park where I caught a few much-needed winks snuggled up with my guitar under a large tree, and eventually woke up and made my way to a McDonald’s to use the internet and discover my change of venue.

The new spot was the recently opened Number 1 Bar, and I was one of many performers to get up and play a few tunes between the house band’s two sets. Mullingar was mourning the unexpected and sudden passing of a local musician, and though there was clearly a hint of the somber to the night’s festivities, the musicians played admirably in honor of their late friend with smiles on their faces.

The following night I had a house concert in the family home of one of the members of the Irish folk trio Scout in Fore, Ireland. Between last tour and this, I have been privileged to enjoy many days and nights catching up on rest and being spoiled with good food and drink and warm fellowship there.

My arrival in Ireland marked the first time in more than two months that I had been in a natively English-speaking country. My last four days on the continent proper were spent in Paris, working on my limited French, meeting some previously online-only friends in person, laughing and catching up with some old friends, receiving strong attention and molestation at the hands of two separate women who would both eventually confess to having boyfriends somewhere, enjoying an early morning bottle of wine and fascinating conversation with a homeless gentleman who assured me he would serve as my lawyer on the other side of the great divide, and playing two shows in Belushi’s, the first at the Canal location I played back in May and the second at the new Gare du Nord location, where the musician’s stage is literally over the bar.

And, of course, prior to Paris, I was in Barcelona, land of the thieving prostitutes of uncertain sexual properties and distinctions. There is little to report from my last day or two in Barcelona, other than I did finally take in Catalan architect Antonio Gaudí’s Park Güell, which was magnificent.

Also, the 15-hour bus ride from Barcelona to Paris is worth mentioning, firstly because of the sheer amount of time I was on a bus; secondly because of the man who sat behind me whom I coined “The Goat” during my ongoing internal dialogue –– “The Spanish Goat” has a nicer ring to it, but I am not sure the man was Spanish.

About two hours into the trip, a stop was made, which I half-slumbered through. When I fully awoke and stood up to stretch a bit, I noticed a new passenger: a middle-aged gentleman seated directly behind me, shooting a cold stare of questionable intention in my direction. Uncertain of how I could have managed to make such an enemy so soon, I assumed the man simply had a dour disposition.

The remaining 13 hours of the trip led me to think that perhaps The Goat believed I murdered his mother in this life or a previous one.

Upon taking my seat again, I shuffled around uncomfortably a few minutes and finally dared an attempt to recline my seat ever-so-slightly from its fully erect and upright position. The seat did not move.

I turned slightly to see the top of the man’s head, firmly planted on the back of my seat, legs shoulder-width apart, feet firm on the ground, elbows on knees. The Goat had posted up. Quite a foundation. And unmovable.

To make matters worse, the man would regularly head-butt my chair, hence my moniker for him. Whereas some people might roll their head around or shift in their seat occasionally to reposition themselves, The Goat heartily rammed me from behind. For 13 hours straight.

Even when he decided to throw his seat in full recline, basically resting under the chin of the poor young French lad behind him, The Goat somehow managed to keep his knees so that I could not move in the slightest.

I found myself getting up more often than usual, just so I could throw myself back hard into my chair. My adjustments in my seat became more and more violent and always involved me flinging myself backwards. Every time it was met by two or three hard rams and no give in position. The Goat possessed admirable skill in causing misery and discomfort.

I’ve never met a stranger so oblivious or determined to be an inconvenience. I reasoned that saying anything would certainly invite a confused and volatile conversation in broken-Spanish, and the way my luck was going, I could imagine the two of us being dropped along the side of the road somewhere to do battle like those shaggy mountain goats one sees on nature programs and fend for ourselves getting to Paris, so I kept my mouth shut and endured our little dance for the duration of the ride.

The Goat never said a word.

However, upon our arrival in Paris, he scampered nimbly off the bus, bellowed proudly, hoofed over a trash can, and began chewing garbage, shaking his head, gazing stupidly into the street.