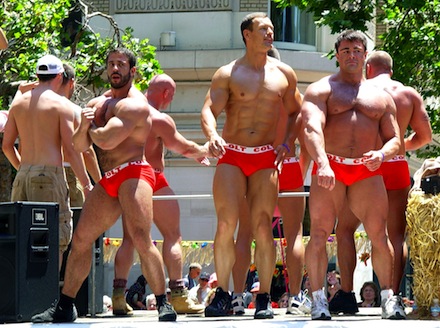 A gay tempest was unleashed in a Dallas teapot yesterday when the Dallas Voice, North Texas’s LGBT newspaper, posted a story about parade organizers and police enforcing a “no nudity” dress code for this Sunday’s Dallas pride parade. Declaring themselves foes of both buttocks and boners, the New Gay Puritan Enforcers have warned leather men and go-go boys alike to wear swimsuits instead of thongs/jocks. Some parade traditionalists are outraged, declaring the prohibition to be “sex-negative” and an example of creeping pressure to be “heteronormative,” i.e. “like straight people.”

Tarrant County’s pride parade is coming up October 5. In case you were wondering if Fort Worth celebrants will also be forced to wear corsets and petticoats, an event organizer told me it was “a non-issue” because parade applications already warn folks that nudity is verboten. And, as in years past, they will be asked to cover up or leave the parade if they violate the agreement.

“This is a historic year for gay people,” the organizer opined. “We can now get married in 13 states. We can file joint federal income taxes for the first time ever. And the newspaper headline is, ‘No nudity at the gay pride parade?’” Her words were followed by a long, “God, give me strength” sigh.

I’m inclined to agree with the Fort Worth organizer, if only because the word “heteronormative” gives me a headache. It implies that there’s such a thing as “homonormative,” and there’s not. LGBT people run the spectrum from ass-gyrating club dancers to overstarched, finger-wagging Republicans. And that’s as it should be. The urban gay ghetto is only one of many LGBT subcultures in America, and it’s far from the defining experience of gayness.

Here’s the equation: More social progress = more diversity in parade participation = a greater need for a common set of rules by which all people can reasonably participate. So put your pants on, guys. Your ass wasn’t nearly as toned as you thought, anyway.