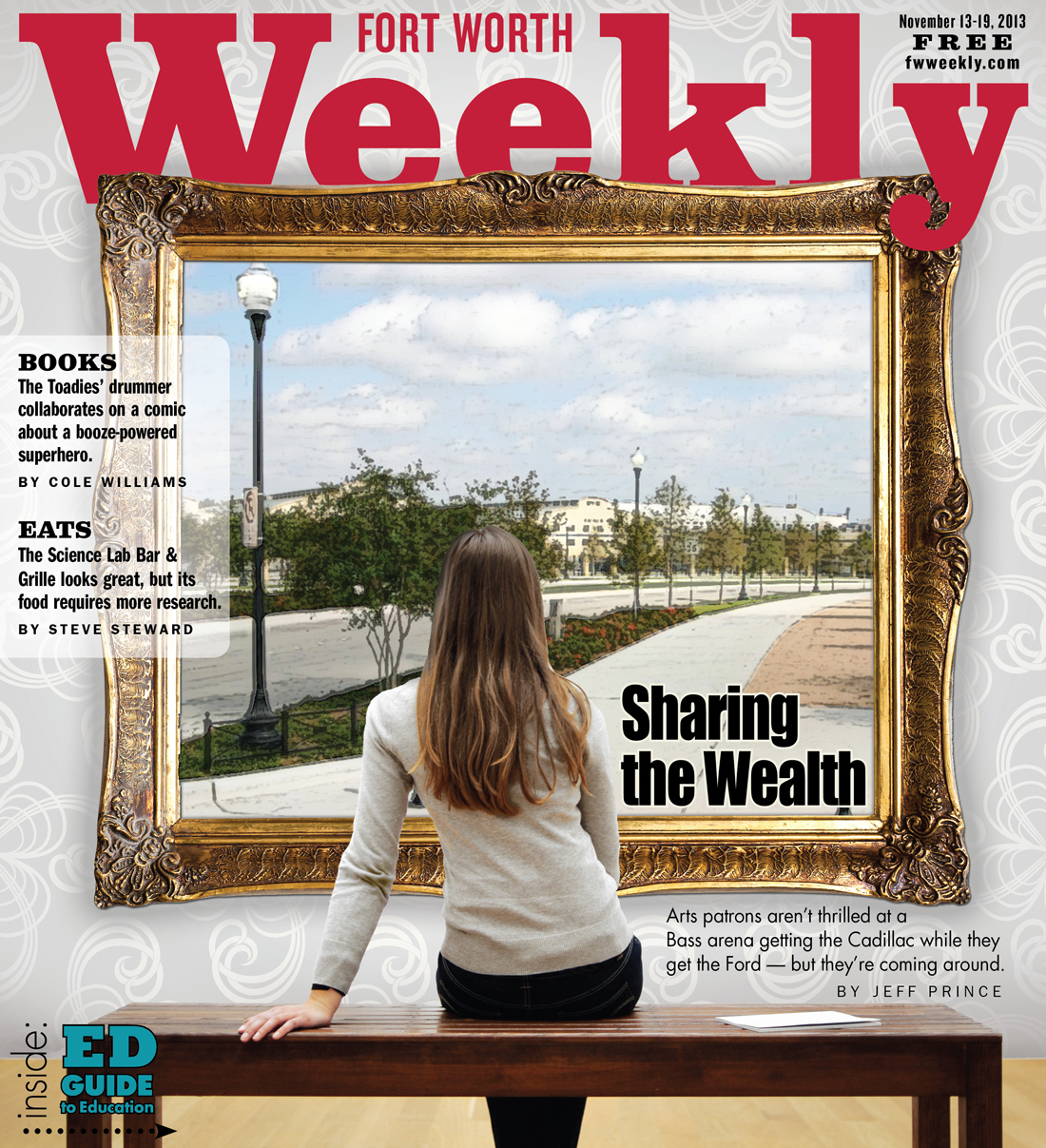 The newly built Trail Drive just south of the Will Rogers Memorial Center is about as fancy as a road gets in this city. The extra-wide four-lane street includes more than 100 ornate streetlamps that cost $1,300 each, beautifully landscaped medians, automated sprinkler systems, and about 100 newly planted trees.

The road stretches only about half a mile and doesn’t lead to anything other than a sprawling, perpetually empty parking lot.

And yet the road’s immaculate appearance — and its price tag — leaves no doubt that the city went above and beyond the usual street job. The city spent $10.5 million on the road, with Tarrant County kicking in another $5 million. A typical four-lane road costs about half that much.

Influential billionaire developer and supporter of the annual Fort Worth Stock Show & Rodeo Ed Bass is trumpeting the new street as a needed improvement for visitors to the Will Rogers. But the street is also figured to serve as vital infrastructure for a state-of-the-art equestrian center that Bass has been wanting to build there for many years.  Many questions about that project remain unanswered.

The street’s high cost seems at odds with city officials’ recent attempts to rein in spending. During budget discussions earlier this year, officials suggested cuts in numerous areas, including the arts, leaving some residents fuming about the lopsided nature of the “Cowboys & Culture” slogan.

“It felt like the culture part was being left out in the cold,” said Arts Council of Fort Worth president Jody Ulich. The nonprofit council distributes money to several dozen organizations, including museums, Fort Worth Opera, and Texas Ballet Theater.

Arts supporters feel that city officials have made it clear in recent years that theaters, symphonies, ballets, museums, and other arts and cultural organizations that generate an estimated $80 million annually for the city and attract a steady stream of tourists don’t mean as much as a three-week stock show and rodeo and a  hoped-for equestrian center.

Arts groups that received close to $1.5 million a few years ago from the city have seen their annual allotments steadily whittled away. By 2012 the city was giving less than half that amount to the Arts Council to distribute to local organizations.

Comparable cities around the state provide two or three times as much to their arts councils.

Meanwhile, a $27 million parking garage built to handle the large stock show crowds spelled the end of free parking that Cultural District visitors had enjoyed year-round for decades. In the 49 weeks of the year when the stock show isn’t being held, museum visitors and employees must pay up to $8 a day to park — often in lots that stay nearly empty during the week. The fees go to pay off the Western Heritage Garage debt.

“The stock show wanted the parking garage to increase their revenues and didn’t care what it did to the rest of the people,” said a nearby museum employee who asked not to be named, so as not to draw the wrath of city officials. “The city pays the debt service, and the stock show gets the revenue. The people who run the stock show also appear to run the city.”

After a flood of complaints, city officials established a variable rate system that allows people to park free for 45 minutes or pay up to $10 depending on the length of stay.

Decades ago city officials promised to maintain free parking at the Amon Carter Museum of American Art. Nowadays, the Carter still offers a small parking lot with free spaces, but when the museum is crowded and the parking lot is full, overflow motorists must pay to park curbside, in a lot, or in the garage that also sits empty for most of the 49 weeks when the stock show is on hiatus.

The longstanding flea market held each weekend inside a Will Rogers cattle barn saw attendance plummet once parking fees went into effect. Fewer customers meant fewer vendors, and the best flea market in the city became a shell of itself.

Z’s Café, located in the Fort Worth Community Arts Center, lost 80 percent of its business. Few people wanted to pay $8 to park to buy a $6 sandwich. Owner Carlo Capua pleaded with city officials for relief. Z’s Café partners with the nonprofit Samaritan House to provide outreach to people affected by HIV/AIDS.

“We had to move,” said Capua, whose restaurant is now on Pennsylvania Avenue in the Hospital District. “We saw the writing on the wall and realized that by being in that area we couldn’t count on the walk-in traffic because of the parking situation.”

By 2012 arts lovers were fed up. They expressed their dismay in budget hearings at city hall. Mayor Betsy Price vowed to look into the matter, and she kept her word. Early this year, she and city council members created a task force composed of local business leaders and arts enthusiasts and gave them full access to city staff.

What happened next didn’t exactly transform Fort Worth into an arts-at-all-costs city, but it bandaged a bloody situation, soothed feelings, and gave arts enthusiasts hope that better days lay ahead.