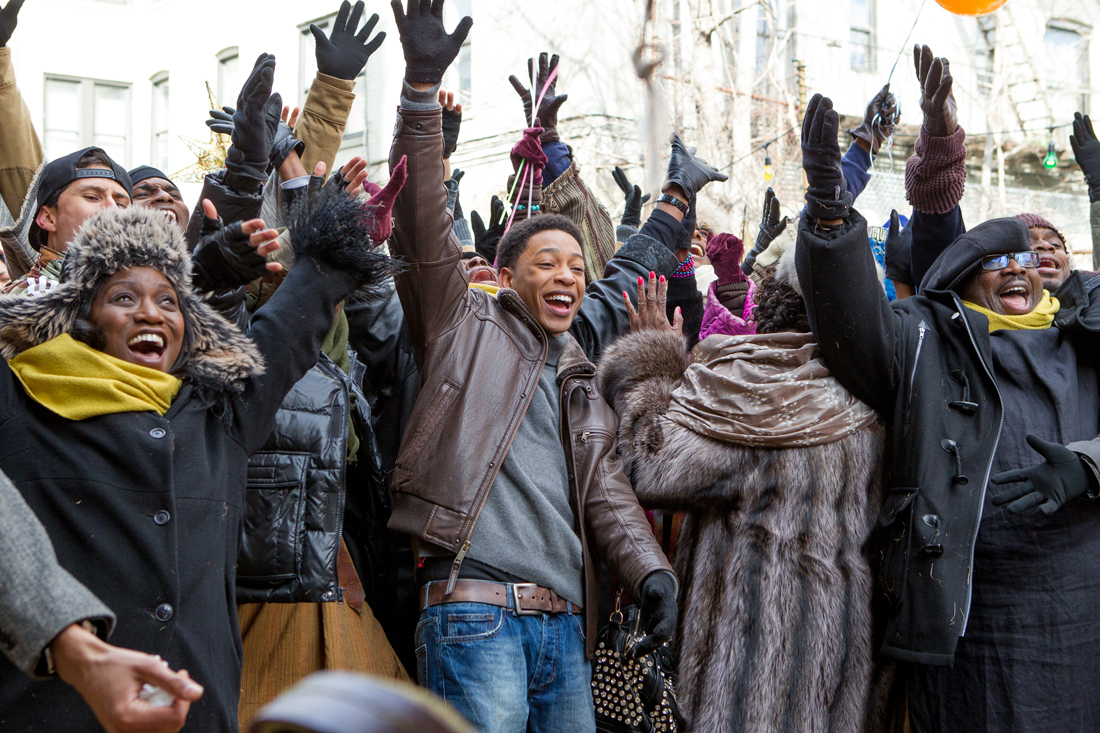 Black filmmakers have grabbed center stage this year, and the heartening thing is, they’ve mostly been new blood. Steve McQueen reached a broad American audience with his third feature 12 Years a Slave, Ryan Coogler made a brilliant debut with Fruitvale Station, and Lee Daniels (from an earlier generation but still relatively new to filmmaking) scored a huge hit with The Butler.

In Lee’s Oldboy, Josh Brolin portrays Joe Doucette, an alcoholic ad salesman, deadbeat dad, and all-around loathsome human being who passes out on the sidewalk one night in 1993 and awakens to find himself locked in a fleabag motel room with no exit. Eventually, he learns from the TV that his ex-wife (Hannah Ware) has been raped and murdered and that he has been framed for the crime. Imprisoned for 20 years, Joe gives up drinking and whips himself into physical shape until he’s mysteriously released in an empty field and provided with a new suit, an iPhone, and several thousand dollars in cash. Joe resolves to track down and pay back his captors and find his daughter again.

The film is a remake of Park Chan-wook’s celebrated and similarly named 2005 Korean thriller, itself based on a Japanese manga comic. Screenwriter Mark Protosevich comes up with a new backstory and motivations for the villain (Sharlto Copley, wearing expensive suits and projecting the right amount of grotesquerie). Park would probably be delighted by its twistedness, and it chimes with the plot’s climactic revelation, which will deal an almighty sting to anyone unfamiliar with the original.

The bigger change is in the style of the piece. The original boasts an infamous one-take shot with the hero returning to  his prison and killing 15 guards with a hammer. Lee’s version is more extended — Joe takes down at least 20 guys — but it misses the sadness and sense of wasted humanity that gave the original its pathos. Also, I’m disappointed that Lee didn’t re-create the other infamous scene from the original, in which the hero, contemplating revenge, chomps on a live octopus. (The Humane Society probably had something to do with that.)

Park did up his movie in a high style, with classical music on the soundtrack, scrupulous compositions, and burnished colors. That combination of aesthetic refinement and loving bloodlust is something Lee is neither capable of nor much interested in. Instead, he and cinematographer Sean Bobbitt (who also photographed 12 Years a Slave) film this in a middle style that accommodates both the villain’s luxurious apartment and the gritty New York streets that Joe navigates. It’s the wrong move; Park’s baroque style emphasized the gory violence and raw emotions in the story. Compared with that, Lee’s Oldboy comes off staid and muted. Lee probably wouldn’t appreciate this comparison, but the low style of a filmmaker like Quentin Tarantino might have come in handy here.

Of course, the muted quality here may be down to Brolin’s performance. The role needed an actor with greater rage and a good streak of insanity. The stolid Brolin isn’t mad enough in either sense of the word, even in the scene in which Joe ties up and tortures the guy who runs the prison (Samuel L. Jackson with a blond mohawk). The lead actor is upstaged by Copley and Elizabeth Olsen, who is vulnerable beneath her streetwise exterior, as a medical worker with a troubled past who helps Joe get to the bottom of the mystery.

What drew Lee to this material? I figure he was held by this story of two men whose quests for retribution recoil upon themselves, while the violence probably appealed to the director’s subversive bomb-throwing side. However, this one time, Lee is defeated by his own unwillingness to push the envelope. His remake still serves a valuable purpose in bringing this story (which would otherwise scare away American studios) to a wide audience, but this fundamentally compassionate filmmaker quails before the darkness and evil here. That’s the main reason this film falls short.

I found Lemmons’ version of Black Nativity frustrating as well, because it seems to have everything it needs to achieve greatness. This adaptation of Langston Hughes’ 1961 stage musical is dripping with talent in the acting, directing, and songwriting departments. Yet despite some transcendent moments, the film mostly refuses to lift off. I take some consolation from the fact that this family-friendly entry for the holidays seems destined to reach a large audience, and Lemmons is an authentically great filmmaker who has never enjoyed big-time commercial success. You know what? I really should be even more consoled, because this film does give us some remarkable things.

Where the stage play told the Nativity story, the film constructs a contemporary tale around it. Newcomer Jacob Latimore portrays Langston, a 15-year-old kid named after the Harlem Renaissance poet who discovers one December that he and his mom Naima (Jennifer Hudson) are about to be evicted from their apartment in Baltimore. Struggling and alone, Naima peremptorily packs Langston off to New York City to stay with her parents (Forest Whitaker and Angela Bassett), from whom she is estranged. As the boy uneasily settles in with his devoutly Christian grandparents — his grandfather is a minister — who are practically strangers to him, he stews in anger. It’s really no wonder, since neither Naima nor his grandparents will tell him anything about why the family has split.

Like Hughes’ play, the movie makes use of traditional spirituals (like Hudson singing “Fix Me Jesus”) and carols sung in a gospel style, but it also has a batch of original songs penned by R&B mainstay Raphael Saadiq. He’s an intelligent and eminently listenable songwriter, but composing songs for characters within the framework of a story takes a particular kind of talent. This is Saadiq’s first such effort, and he hasn’t yet picked up the knack. There’s one song that takes flight, “Hush Child (Get You Through this Silent Night),” a bristling four-part number with Latimore, Hudson, Luke James, and Grace Gibson (the latter two playing an expectant couple of parishioners whom Langston imagines as Joseph and Mary). Great as this is, too many of the other songs come across sounding the same, which is a real shame given the musical talent in this cast, among them Mary J. Blige and Nasir “Nas” Jones.

As for Lemmons, her inexperience with a musical’s demands also betrays her. She has shown an exquisite ear for music in her previous films like Talk to Me and Eve’s Bayou. What she doesn’t have is the explosive energy that a musical requires, and when the characters burst into song and dance, the moment too often sits there. The Christmas pageant miracle (with all the characters gathering in the church) that provides the climax of this film just comes off as a contrivance in her hands.

Fortunately, Lemmons does sterling work with the cast. Langston’s jail-cell conversation with a shady inmate (Tyrese Gibson) feels real, as does a scene when he attempts to bargain with a pawnshop owner (played strongly by the director’s real-life husband, Vondie Curtis-Hall). Hudson, looking properly overwhelmed and unglamorous, as a single mom, remains a bracing vocal presence, while Bassett shows off a fine alto as the preacher’s wife who hides her pain beneath a polite veneer. Whitaker is currently attracting Oscar buzz for his performance in The Butler, but he’s even better here as a severe, discipline-oriented churchman who loosens up and cracks a smile only when he’s preaching to his congregation. Projecting the pastor’s intellectual rigor but also revealing the private heartache that he carries around inside him, Whitaker is downright mesmerizing. The performances in Black Nativity outshine its shortcomings and make it a treasurable holiday experience.