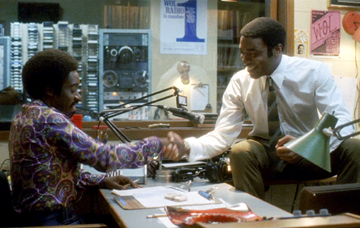 The (Caucasian) makers of Dreamgirls did a pretty fair job of fleshing out the compromises and dilemmas that these entertainers had to face. It’s a high compliment that Talk to Me, made by African-Americans, finds even more shades of gray in this subject while being just as entertaining. In fact, it may be the year’s best movie when everything’s said and done. The film is based on the life story of Ralph Waldo “Petey” Greene. Don Cheadle plays Petey, whom we first see in 1966 as a small-time criminal and drug addict who passes his time in prison by cracking jokes over the radio to his fellow inmates. One of them has a brother named Dewey Hughes (Chiwetel Ejiofor), and after Petey finagles himself an early release, he hits up Dewey for a job. Dewey’s an executive at a D.C. radio station called WOL, which is hemorrhaging listeners. Desperate to reconnect with ordinary Washingtonians, Dewey puts Petey on the air.

At first we think we know what’s up — jive-talking, pimped-out Petey makes an easy contrast with the suit-clad, proper English-speaking Dewey. Lesser filmmakers would have left them there to score predictable comedic points off each other. However, screenwriters Rick Famuyiwa and Michael Genet (the former from the engaging Brown Sugar, the latter from the atrocious She Hate Me) don’t let them settle into type, as signaled by a riveting early scene in a pool hall where Dewey schools Petey at nine-ball while revealing himself as also being a product of the projects. The writers’ contributions are massively augmented by director Kasi Lemmons, a former actress whose first name is pronounced “Casey.” This sorely neglected filmmaker has given us only two other movies, one an out-and-out masterpiece (1997’s Eve’s Bayou), the other an intriguing mess (2001’s The Caveman’s Valentine). Neither gained much exposure, and as a result Lemmons remains best known for portraying Jodie Foster’s roommate in The Silence of the Lambs.

Whereas her previous directing jobs called for wild flights of imaginative fancy, this one demands and receives a more earthbound approach. As a result, we can more clearly see her skills as a nuts-and-bolts storyteller. The movie is fast and fizzy as Petey captures a loyal following with his no-holds-barred on-air antics — there’s a memorable horrorstruck reaction from Dewey when Petey’s first broadcast includes a broadside aimed at Berry Gordy. Meanwhile, Dewey struggles to keep his new DJ clean and sober while fending off the sniping of the other jocks (Cedric the Entertainer and Vondie Curtis-Hall) and the FCC-fearing management’s interference. The film’s rowdy comical atmosphere takes an abrupt turn when the station owner (Martin Sheen) bears the news of Martin Luther King’s assassination. So many directors would have tripped over this, yet Lemmons turns it into a magnificent set piece. Petey delivers the news straight; only after he sees the rioting in the streets does he go back behind the mic and find the words to express the city’s grief and rage while urging everyone to stay home. Moving as it is to see the ex-con locate the best part of himself in such a terrible moment, no less so are the details that spiral around him, from the chaos of the riot to the various stricken reactions of the WOL staff. When Petey goes home and collapses into the arms of his girlfriend Vernell (Taraji P. Henson), the sequence is punctuated by a visual gag that’s not only true to the situation but also a much-needed release for all the tension that’s been built up.

In addition to all her other gifts, Lemmons is a fantastic director of actors. It’s no longer surprising to see a great performance from Cheadle, and the same is rapidly becoming true of Ejiofor. However, there’s a feverish joy to their interplay here, both in the early going and later when Dewey tries to push a reluctant Petey to fame beyond Washington. Like their characters, these actors are deep in a cheerful game of one-upmanship, pushing each other to greater heights. Whether you consider Petey’s ultimate rebellion against Dewey’s management as a loser’s defeatism or a regular guy’s determination to stay true to himself, these two actors do the difficult job of making you see both sides of the coin. In addition to the leads, Henson deserves to be singled out — this actress is often typecast as trashy characters like this one, but she plays Vernell with such ghetto-fab zest that even the most judgmental viewers will be compelled to take her as she is. Seeing Lemmons marshal her actors, it’s hard not to think that her enormous talent belongs in Hollywood, working on Oscar-caliber pictures with big budgets and A-list actors. Then again, a picture as rousing, thought-provoking, and funny as Talk to Me suggests that Kasi Lemmons is doing pretty well where she is.