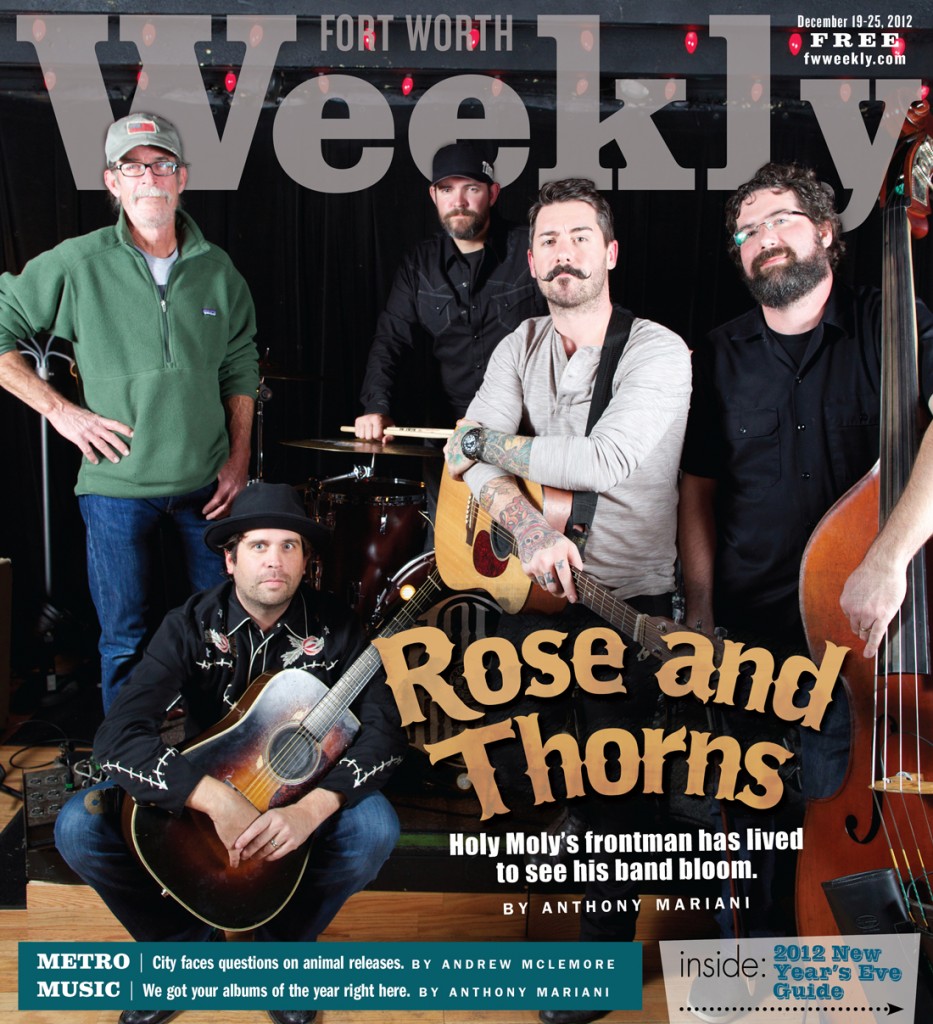 The last time Holy Moly played Billy Bob’s Texas, a mosh pit broke out, a first for the World’s Largest Honky-tonk®. You’ve got to wonder what was going through the regulars’ heads. These good folks had simply shown up to do some line-dancing, maybe drink a couple-a beers, maybe grab a little ass, and then –– bam! –– those people are slammin’ themselves into each other! And they’re not even in rhythm!

The non-regulars, the people who rarely ever go to Billy Bob’s but went on this night just to see the Fort Worth cowpunk quintet, weren’t surprised. There’s really a lot more to Holy Moly than rockified C&W. There’s punk fury, for one thing; for another, there’s a straight-ahead pop sensibility.

After pounding out three albums of hootin’ and a-hollerin’, Holy Moly settled down a little with its fourth long-player. Grasshopper Cowpunk (2011) is still fun and occasionally wheels-off, but it’s much more mature –– stylistically and especially lyrically –– than the band’s earlier output (“Rose and Thorns,” Dec. 19, 2012).

“We think people who assume [that] Holy Moly is just about silly, rowdy songs will be surprised by what we’ve crafted,” Hull said.

Recorded last spring with producer Will Hunt at his Spaceway Productions studio downtown (Burning Hotels, The Hanna Barbarians), Brothers’ Keepers is 13 mostly moody, emotionally complex tracks that are country at heart but full of classic-rock and punk blood. Rose’s twang is tempered by a less exaggerated delivery and some robust, welcome vibrato, and the new songs, while still made of ragged, organic performances, are smooth, with sumptuous melodies and juicy hooks. “Cocaine,” featuring strings from the Dallas collective Open Classical, is a pristine, genuine yet non-sentimental knockout about Rose’s wayward father, while “Time Travelin’,” with its tale of alcohol-fueled transportation, will fill the dance floor. Hull said that having careers and lives outside of Holy Moly frees him and his bandmates to do whatever the hell they want musically.

“If we want to add electric guitar and double bass drum to make a straight-up rock song, we do,” he said. “If we want to add horns and pedal steel, we do. … If we want to add samples and loops, we will. Ultimately, that’s why we’re still together after nearly eight years. We genuinely love what we’re playing, and we’re not butting heads about a direction or some artistic vision. It’s all about playing the best we can and writing music that gives an emotional response.”

Tickets to the album release show are $10. Bring your elbow pads.

Too bad you guys don’t spend more money at Doc’s Records & Vintage (9522 Camp Bowie West, 817-732-5455). If you did, you’d probably free up co-owners Jerry and Jenkins Boyd to throw more kickass parties. Look at this one that father and son have put together for Saturday: For their Thanksmas Party, operatic synth-goths Pinkish Black, the mathy Denton dance outfit Bashe, stoner-rockers Fogg, divorce-popster Son of Stan, and Fort Worth country-folky Jake Paleschic (also a proud member of the rowdy, upstart Longshots) will be the icing on a cake filled with discounts (20 percent off all merchandise except Black Friday releases), free food, and free beeeeer! Doors open at 11 a.m.; music starts at 1 p.m.