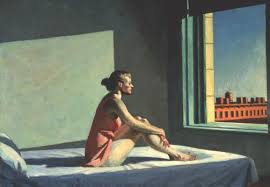 Night & Day saw Edward Hopper’s “The Night Hawks” in Chicago and were struck by how the glass in the restaurant’s window was so realistically rendered that it felt like we could reach into the painting and tap on it. The Dallas Museum of Art’s current show, Hopper Drawing, sheds valuable light on the American master’s creative process and runs thru Feb 16 at 1717 N Harwood St, Dallas. Admission is $5-10. Call 214-922-1200.

Though known for his fearsome temper (hence his nickname “The Angry Man of Jazz”), Charles Mingus is best remembered for his trailblazing work as a musician/composer, throwing bebop, classical, gospel, Latin, and avant-garde music into a ferocious stew that was entirely his own. Paul Unger and friends will unite onstage for a Charles Mingus tribute at 9pm at Scat Jazz Lounge, 111 W 4th St, FW. Call 817-870-9100.

Jean Reinhardt was born in 1910 to a family of Romani Gypsies. His nickname “Django” is a word in the Romani language that means “I awaken.”  The legendary jazz guitarist’s legacy is celebrated once again in the 11th annual Django Reinhardt Festival, which features live performances by regulars String Theory Manouche and Gypsy Moon. The festival runs Fri-Sun at Arts Fifth Avenue, 1628 5th Av, FW. Tickets are $20-45. Call 817-923-9500.

When Kansas’ basketball team visited TCU last year, the fifth-ranked-at-the-time Jayhawks walked away victims of an upset. This time, they come to Fort Worth with freshman sensation Andrew Wiggins, who’s so good that NBA teams are purposely losing games to improve their chances of getting him with the top pick in next year’s draft (“Riggin’ for Wiggins”). Tip-off is at 7:30pm at Daniel-Meyer Coliseum, 2900 S University Dr, FW. Tickets are $20-30. Call 817-257-7967.

The Dance Theatre of Harlem disappeared for almost a decade in the 2000s, but now Arthur Mitchell’s company has returned under new direction and turning heads once again. In a world where ballet companies still don’t cast many black dancers in leading roles, the troupe’s mission remains vital. Performing in Fort Worth for the first time, the ensemble takes the stage at 7pm at Bass Performance Hall, 555 Commerce St, FW. Tickets are $16.50-77. Call 817-212-4280.

Single-handedly keeping its composer, Adolphe Adam, from being completely obscured by history, Giselle retains its place in the ballet repertoire, telling the tragic story of a peasant girl who falls in love with a count. Peter Wright’s production at the Royal Ballet plays on movie screens at 7pm at Cinemark Tinseltown, 911 W Hwy 114, Grapevine and at Cinemark 14, 2825 Wind River Ln, Denton. Tickets are $13-15. Call 818-761-6100.

Best known for the wacky characters she played on Saturday Night Live, Molly Shannon is also a published author whose children’s book Tilly the Trickster has now been turned into a musical. The regional premiere of this show about a girl who loves practical jokes runs thru Feb 1 at Artisan Theater Center’s Belaire Theater, 420 E Pipeline Rd, Hurst. Tickets are $5-7. Call 817-284-1200.