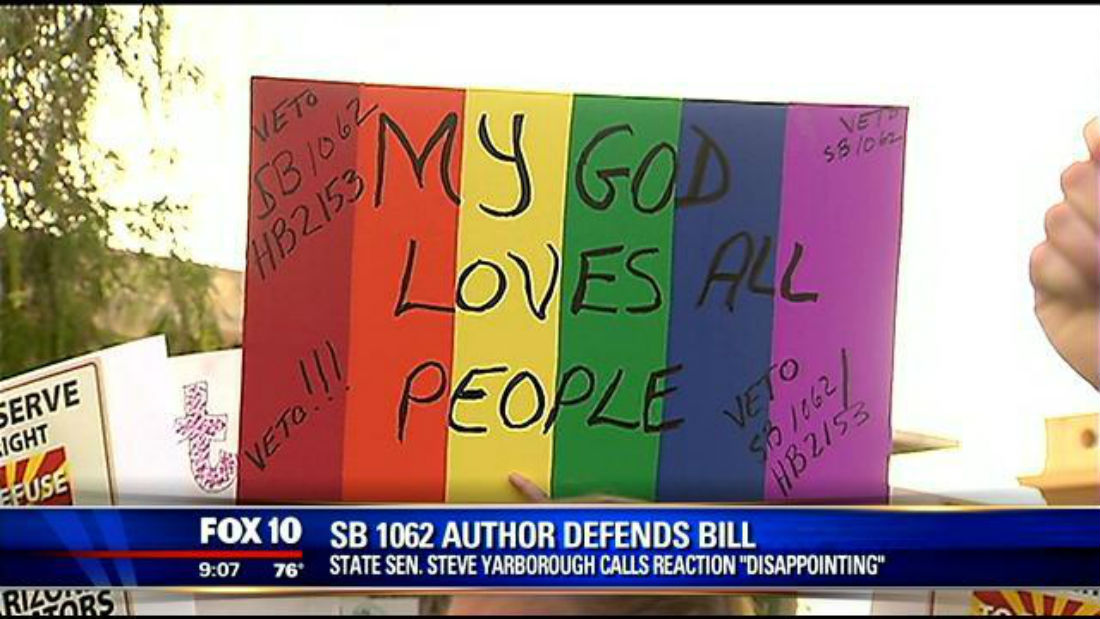 I wasn’t born in Arizona, but I lived there through my childhood years into my 20s. My family is still there. I’m usually proud to fly the state flag. The last few days, not so much. That’s because the state legislature passed a bill that would allow businesses to deny services to anyone they found objectionable on religious grounds (read: gay people). They passed SB 1062 about a week after Ellen Page came out of the closet. Lots of love for Ellen Page! Not much for my home state, which got slagged. Today Jan Brewer, the state’s Republican governor and a devoted friend of gun nuts, finally put an end to the embarrassment by vetoing the bill, after considerable pressure from the business community, religious leaders, Arizona’s Congressional delegation, the National Football League, Mitt Romney, Newt Gingrich, Fox News, and LGBT people everywhere, among others.

This bill is the poisonous fruit of the Citizens United doctrine that corporations are people. As an individual, you do have the right to shun whoever you want on the basis of race, color, creed, gender, religion, sexual orientation, or whether they wear red shoes every Thursday. However, SB1062 and similar bills making their way through state legislatures in Missouri, Indiana, and Georgia seek to extend this right (or at least the “religion” part of that) to companies. You can see where this road leads: back here. Of course, the bill’s dwindling number of defenders framed this measure as fighting discrimination. If only George Orwell were still with us. Among those who see no inconsistency here are Arizona State Sen. Al Melvin, who said that the prospective law wouldn’t be used for anti-gay discrimination because Arizonans are better people than everybody else. Flattered as I am by this notion, I don’t put any stock in it.

The most disgusting thing about the whole disgusting affair is this radio interview given by the three Republican state senators who withdrew their support for the bill after having voted for it. They admitted that they didn’t expect the bill to pass the legislature. By voting as they did, they thought to curry favor with social conservatives while avoiding the consequences. Now it’s all backfired on them and the state. The Republicans in Kansas passed a similar measure, but at least they were smart enough to withdraw it when they saw the public relations firestorm headed their way. These guys didn’t actually want to discriminate against gay people, they just wanted to waste millions in taxpayer money by supporting a bill that, even if had it been signed into law, would have gotten spiked by either a voter referendum or the courts (the way Texas’ same-sex marriage bill did today — hooray for something). How cynical can you get? They’re worse than the real homophobes.

The pity of it is, Arizona’s a great place. Despite heat that has conditioned me to laugh at Texas’ summers, its weather is pretty predictable, the state being out of the range of tsunamis, hurricanes, earthquakes, and tornadoes. It’s home to the Grand Canyon and lots of other natural wonders (including the underappreciated Kartchner Caverns), a fine university from which my brother graduated, an awesomely designed baseball stadium and public library, and a fantastic museum that should be on the bucket list of anybody who cares about music. In my own experience, Arizona isn’t any more homophobic than most places in America. It’s certainly not poor, benighted Uganda. There’s the new slogan for the state tourism board: “Arizona: Less Homophobic Than Uganda.” You’re welcome, guys!

Yet sometimes we suck, and there’s no avoiding it. Like we did some 20 years ago, when voters elected a governor given to saying nasty things about gays and people of color, and rejected a state holiday honoring Martin Luther King, which resulted in the loss of a Super Bowl. (We rectified both mistakes pretty quickly.) And like right now. I can’t remember the last time New Mexico inflicted a mess like this on themselves. I think about my first-grade classmate Troy, whose gayness was obvious when we were both five years old, and my college classmate Erika, one of the most lesbian women I’ve ever met. I think about them potentially living under a law like this, and it makes me want to play Macklemore’s “Same Love” on a loop. And I hate that song (for purely musical reasons).

Well, now we’ve all learned that “protecting religious freedom” is the new homophobia. It might sound respectable, but it’s just a cover for the same old ugly thing. I’m glad that other states can now expect to face the same uproar if their legislatures try this crap. And I’m looking forward to the most embarrassing thing about Arizona being that we love Linkin Park. That I can live with.

Protests Reach the Stockyards During Back the Badge Event